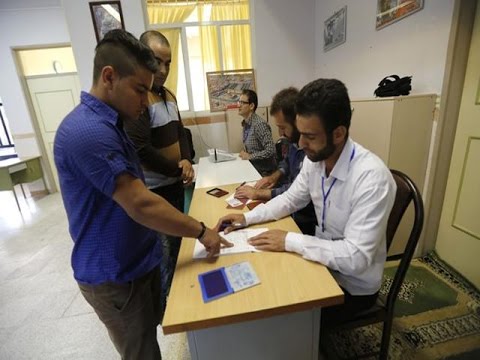 The problem was the Guardian Council, a body which has veto authority over any legislature, which in this case rejected all 33 bills introduced by women deputies.

Parvaneh Salahshouri in the conference of elected moderates and reformists of Iran, March 2016. Wikicommons/ Hamed Malekpour. Some rights reserved.Seventeen women are going to be elected to office as a result of the recent parliamentary election in Iran. While this marginal increase in women’s representation will not change the overwhelmingly masculine character of the Iranian Parliament, it is still fair to wonder whether these newly elected women deputies and reformists will have an impact. Will they be able to usher in laws that advance gender equality?

The Supreme Leader’s position on women’s rights is not clear. Ayatollah Khamenei encouraged women to take part in this year’s election by stating that, “There is no need for women to take permission from their husbands to take part in the elections.” But will he issue similar statements in support of amendments to the discriminatory laws currently in place? His voice is crucial if the laws that require women to ask their husbands’ permission before taking jobs, obtaining passports and traveling outside the country are ever to be taken off the books. These are laws that most women can hardly fathom living under.

For his part, President Rouhani has said that he admired the Iranian people who “showed their power once again and gave more credibility and strength to their elected government.” Rouhani’s government received a major boost in this election, but we still need more clarity as to whether or not he will stand up for the rights of women, who constitute half of the electorate in the Islamic Republic.

The experience of the Sixth Iranian Parliament—elected in 2000, comprised predominantly of reformist leaders, and yet unable to bring about meaningful reform—could serve as a telling indicator for how to achieve better results 16 years later.

The reformists then, aspired, in their own words, to make use of the capacities of the Constitution to modify the power structure of the Islamic Republic and to bring transparency and accountability into the political arena. To address the gender inequalities in Shari’a law, some reformist figures advocated for a “pluralistic and tolerant Islam, based on human rights and democratic values.” The 13 woman deputies of that parliament, all of whom were aligned with the reformists, challenged the traditional written and unwritten roles of women in Iran. They had little difficulty in persuading their male counterparts to vote for bills which addressed gender inequalities.

Their problem, however, was the attitude of the Guardian Council, a constitutionally mandated and politically appointed body which has veto authority over any legislature, which in this case rejected all 33 bills introduced by women deputies. However, with the intervention of a separate government entity designed to resolve disputes between these two bodies, 16 of these proposed bills eventually became law. Among them were: removing the condition that required a woman to be married and accompanied by her husband before getting a scholarship to study abroad, and amending articles of the civil code to increase the minimum marriage age for girls from 9 to 13.

Thus, the key takeaway from the eslāhāt or reform era was that within the legal and political system of the Islamic Republic, women’s rights is a contested issue which cannot be modified even within an Islamic framework. The clash between Islamic provisions perpetuating gender discrimination and articles that are theoretically able to create full societal equality within Iran’s Constitution fundamentally hinders any reform of Iran’s legal system. Another unavoidable impediment to changing Iran’s legal system (and the introduction of a new interpretation of Shari‘a) is the absolute power of the Supreme Leader and the discretionary power of the Guardian Council over Parliament. As long as these contradictions exist, the possibilities for reform are feeble.

Still, I have hope. Parvaneh Salahshouri, one of the new women elected to the Iranian Parliament, recently gave an interview in which she expressed her views regarding economic growth, sustainable development, the eradication of violence against women at home and within society, women’s unemployment, the growing number of divorces, and more. Salahshouri is the first member of parliament in the history of the Islamic Republic of Iran to state that she considers wearing a hijab as a matter of choice for women. At the same time, she acknowledged the difficult process that women face in order to reach the level in which they will be able to decide for themselves.

The only way to reach sustainable change in favour of women is the amendment of the Constitution and the removal of the kinds of substantial legal obstacles outlined above. Pressure from society, and especially from women, might eventually compel the Supreme Leader and the government to revise the Constitution to facilitate the process of gender equality.