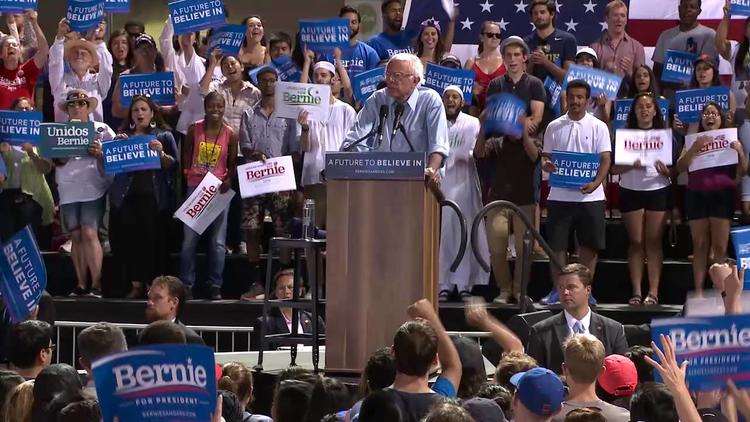 California is in its fifth year of a severe drought. While Republican presidential nominee Donald Trump lied to a crowd in Fresno on May 27 declaring that there was no drought in the Golden State, the U.S. Geological Survey report indicates that the state is still in a drought based on below-average rainfall and snowpack. Over 300,000 acres will not be farmed in California this year because of a lack of water, and the state is facing a catastrophic fire season. Dwindling water resources and dry weather are a consequence of climate change.

On Tuesday, voters in California will head to the polls, and those who care about the environment will be taking a hard look at Democratic candidates Hillary Clinton and Bernie Sanders.

During the past few weeks, Sanders has targeted Clinton for her position on fracking, the process of injecting high-pressure water into the earth to extract natural gas. Earlier this year in a debate, both Clinton and Sanders were asked if they supported fracking. Sanders offered a succinct no, while Clinton offered a meandering answer that she opposes fracking “when any locality or state is against it” and that “we’ve got to regulate everything that is currently underway, and we have to have a system in place that prevents further fracking.” In essence, Clinton was putting qualifiers on her answer about when fracking might be allowed.

When Clinton was Secretary of State, the State Department worked closely with oil and gas companies to spread fracking to countries all over the world through the Global Shale Gas Initiative. Charlie Cray, a senior researcher at Greenpeace USA told The Intercept, “That it was one of State’s highest priorities undermines their credibility as leaders in the global effort to prevent the calamitous threats of climate change.” Given the opportunity to be a leader opposing fracking on a global scale, Clinton worked to promote the practice abroad.

Last week the National Resources Defense Council Action Fund endorsed Hillary Clinton citing a recent speech by Donald Trump as being one of the main rationales for the announcement. Trump recently told an audience in North Dakota that he would abolish environmental and climate regulations and revive the coal industry. The NRDC Action Fund endorsement appears to be more motivated by the fear of Trump’s disastrous plans for the environment than from Clinton’s actual environmental advocacy.

Californians have a history of leading in conservation and climate change. For environmentally-concerned independent voters and Democrats who are deciding between Clinton and Sanders, the choice on Tuesday is to vote their conscience or to vote out of fear.