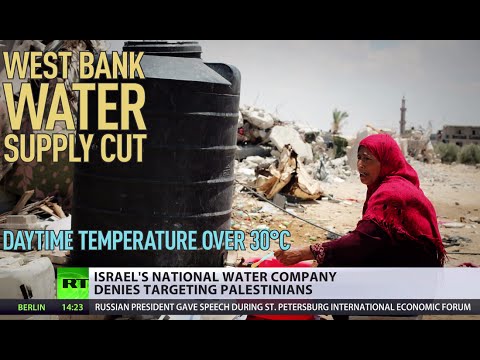 Entire communities in the West Bank either have no access to water or have had their water supply reduced almost by half.

This alarming development has been taking place for weeks, since Israel’s national water company, “Mekorot”, decided to cut off — or significantly reduce — its water supply to Jenin, Salfit and many villages around Nablus, among other regions.

Israel has been ‘waging a water war’ against Palestinians, according to Palestinian Authority Prime Minister Rami Hamdallah. The irony is that the water provided by “Mekorot” is actually Palestinian water, usurped from West Bank aquifers. While Israelis, including illegal West Bank settlements, use the vast majority of it, Palestinians are sold their own water back at high prices.

By shutting down the water supply at a time when Israeli officials are planning to export essentially Palestinian water, Israel is once more utilizing water as a form of collective punishment.

This is hardly new. I still remember the trepidation in my parents’ voices whenever they feared that the water supply was reaching a dangerously low level. It was almost a daily discussion at home.

Whenever clashes erupted between stone-throwing children and Israeli occupation forces on the outskirts of the refugee camp, we always, instinctively, rushed to fill up the few water buckets and bottles we had scattered around the house.

This was the case during the First Palestinian Intifada, or uprising, which erupted in 1987 throughout the Occupied Palestinian Territories.

Whenever clashes erupted, one of the initial actions carried out by the Israeli Civil Administration — a less ominous title for the offices of the Israeli occupation army — was to collectively punish the whole population of whichever refugee camp rose up in rebellion.

The steps the Israeli army took became redundant, although grew more vengeful with time: a strict military curfew (meaning the shutting down of the entire area and the confinement of all residents to their homes under the threat of death); cutting off electricity and shutting off the water supply.

Of course, these steps were taken only in the first stage of the collective punishment, which lasted for days or weeks, sometimes even months, pushing some refugee camps to the point of starvation.

Since there was little the refugees could do to challenge the authority of a well-equipped army, they invested whatever meager resources or time that they had to plot their survival.

Thus, the obsession over water, because once the water supply ran out, there was nothing to be done; except, of course, Salat Al-Istisqa or the ‘Prayer for Rain’ that devout Muslims invoke during times of drought. The elders in the camp insist that it actually works, and reference miraculous stories from the past when this special prayer even yielded results during summer time, when rain was least expected.

In fact, more Palestinians have been conducting their prayer for rain since 1967 than at any other time. In that year, almost exactly 49 years ago, Israel occupied the two remaining regions of historic Palestine: the West Bank, including East Jerusalem, and the Gaza Strip. And throughout those years, Israel has resorted to a protracted policy of collective punishment: limiting all kinds of freedom, and using the denial of water as a weapon.

Indeed, water was used as a weapon to subdue rebelling Palestinians during many stages of their struggle. In fact, this history goes back to the war of 1948, when Zionist militias cut off the water supply to scores of Palestinian villages around Jerusalem to facilitate the ethnic cleansing of that region.

During the Nakba (or Catastrophe) of 1948, whenever a village or a town was conquered, the militias would immediately demolish its wells to prevent the inhabitants from returning. Illegal Jewish settlers still utilize this tactic to this day.

The Israeli military, too, continued to use this strategy, most notably in the first and second uprisings. In the Second Intifada, Israeli airplanes shelled the water supply of whichever village or refugee camp they planned to invade and subdue. During the Jenin refugee camp invasion and massacre of April 2002, the water supply for the camp was blown up before the soldiers moved into the camp from all directions, killing and wounding hundreds.

Gaza remains the most extreme example of water-related collective punishment, to date. Not only is the water supply targeted during war, but electric generators, which are used to purify the water, are often blown up from the sky. And until the decade-long siege is over, there is little hope to permanently repair either of these.

It is now common knowledge that the Oslo Accord was a political disaster for Palestinians; less known, however, is how Oslo facilitated the ongoing inequality under way in the West Bank.

The so-called Oslo II, or the Israel-Palestinian Interim Agreement of 1995, made Gaza a separate water sector from the West Bank, thus leaving the Strip to develop its own water sources located within its boundaries. With the siege and recurring wars, Gaza’s aquifers produce anywhere between 5 to 10 percent of “drinking-quality water.” According to ANERA, 90 percent of Gaza water is “unfit for human consumption.”

Therefore, most Gazans subsist on sewage-polluted or untreated water. But the West Bank should — at least theoretically — enjoy greater access to water than Gaza. Yet, this is hardly the case.

The West Bank’s largest water source is the Mountain Aquifer, which includes several basins: Northern, Western and Eastern. West Bankers’ access to these basins is restricted by Israel, which also denies them access to water from the Jordan River and to the Coastal Aquifer. Oslo II, which was meant to be a temporary arrangement until final status negotiations were concluded, enshrined the existing inequality by giving Palestinians less than a fifth of the amount of water enjoyed by Israel.

But even that prejudicial agreement has not been respected, partly because a joint committee to resolve water issues gives Israel veto power over Palestinian demands. Practically, this translates to 100 percent of all Israeli water projects receiving the go-ahead, including those in the illegal settlements, while nearly half of Palestinian needs are rejected.

Presently, according to Oxfam, Israel controls 80 percent of Palestinian water resources, whereas the “520,000 Israeli settlers use approximately six times the amount of water that the 2.6 million Palestinians in the West Bank use.”

The reasoning behind this is quite straightforward, according to Stephanie Westbrook, writing in Israel’s 972 Magazine: “The company pumping the water out is ‘Mekorot,’ Israel’s national water company. ‘Mekorot’ not only operates more than 40 wells in the West Bank, appropriating Palestinian water resources, Israel also effectively controls the valves, deciding who gets water and who does not.”

“It should be no surprise that priority is given to Israeli settlements while service to Palestinian towns is routinely reduced or cut off,” as is the case at the moment.

The unfairness of it all is inescapable. Yet, for nearly five decades, Israel has been employing the same policies against Palestinians without much censure or meaningful action from the international community.

With current summer temperature in the West Bank reaching 38 degrees Celsius, entire families are reportedly living on as little as 2-3 liters per capita, per day. The problem is reaching catastrophic proportions. This time, the tragedy cannot be brushed aside, for the lives and well-being of entire communities are at stake.