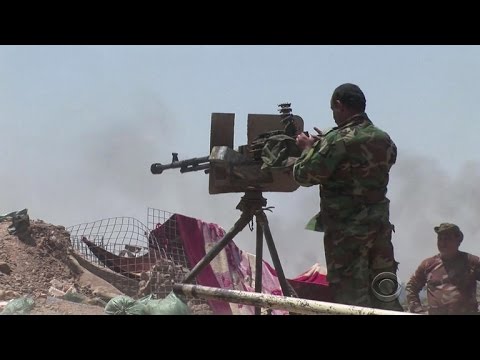 Anti-extremist forces have been fighting in Fallujah for a week. But before they began, there were serious negotiations between the partners-in-battle. And the negotiations continue on the front lines.

On May 23, Iraq’s Prime Minister Haider al-Abadi appeared near an Iraqi army camp near the central city of Fallujah wearing military clothes. Late the night before, he had announced that the effort to re-take the city from the extremist group known as the Islamic State, who had been in control of the city since January 2014, was to begin.

It is clear to most observers and to Iraqis that this fight will be far from easy. Fallujah has long been a centre of Sunni Muslim activism, as well as a stronghold for the Sunni extremist group, Al Qaeda. Fallujah was also the first city in Iraq to come to an understanding with the Islamic State, or IS, group back in 2014, when the extremist group was still presenting itself as a liberator of Iraq’s Sunni sect.

Since then things have changed a lot. No matter which sect they belong to, many Iraqis now see the IS group as oppressors. Nonetheless there are still a lot of civilians inside Fallujah as the Iraqi army approaches. And so, as with other Sunni-dominated areas in Iraq, there is also the question of which military forces can be used in the fighting. If the Shiite Muslim volunteer militias are involved, there are fears that they may take revenge on Sunnis they think are allied with the IS group.

Which is why negotiations between all of those now participating in the fighting, in the lead-up to al-Abadi’s announcement, were fraught. And as fighting continues, the lines continue to be drawn, and redrawn.

On May 19, an elite Iraqi counter-terrorism force managed to push the IS group out of the Rutba area, which is on the highway between Iraq and Jordan and near Fallujah. They did this in just three days, alongside a new US-trained police regiment of about 500, which had been made battle-ready in nearby Habbaniyah and which was armed with US weapons.

There has apparently been little US assistance given to the volunteer militias fighting on Fallujah’s northern front over the past few days; the militias broke their promise to stay on the city’s outskirts.

Shortly after the fight for Rutba, a number of Shiite Muslim volunteer militias began to deploy near the city of Fallujah. Apparently their plan was to unite in opening a new offensive against the IS group in the city, putting an end to the in-fighting that had been happening between them back in Baghdad. There has been a serious, and potentially violent, rise in tensions between the Iran-allied Badr organization and the League of the Righteous militias on one hand and the more Iraq-centric Peace Brigades, part of cleric Muqtada al-Sadr’s Sadrist movement, on the other.

As the New York Times put it: “Targeting Fallujah, only 40 miles from the capital, was immediately seen by the government and militia leaders as necessary to protect Baghdad, and also as a way to exact revenge [for recent, deadly IS group suicide attacks in the capital]”.

Negotiations between al-Abadi and his US allies ensued. Al-Abadi says he wanted to press on into Fallujah, echoing what military and militia commanders were also saying. But they needed US support and air cover to do so. The US has long urged the Iraqis to blockade Fallujah and focus on other targets, like Mosul. And some observers questioned whether al-Abadi jumped into the battle, or whether he was pushed into it by the militia tactics.

However a source inside the Iraqi security forces says that a plan was eventually agreed upon by all parties. The US agreed to move on to Fallujah but only on the condition that the Shiite Muslim volunteer militias did not participate in the battles in central Fallujah and that they would remain on the outskirts of the city, acting as a support the Iraqi army.

Al-Abadi then appointed senior commander, Abdul Wahab al-Saedi, to run the campaign; al-Saedi was also in charge of the operation to push the IS group out of Tikrit in 2015 and he is generally disliked by the Shiite Muslim volunteer militias.

During the campaign against the IS group in Tikrit, al-Saedi fell out badly with Hadi al-Amiri, the leader of the Badr organization militia, and arguably one of the most senior members of all of the Shiite Muslim militias. An experienced military man, al-Saedi is opposed to the volunteer militias taking the law into their own hands and he also insisted on cooperation with the US during the Tikrit campaign. Al-Amiri accused al-Saedi of being more enthusiastic about the US forces than his fellow Iraqis and finally, al-Saedi was dismissed from the post by al-Abadi. But now, thanks to his experience and expertise, he is back.

The campaign for Fallujah then began and the Iraqi army, assisted by raids conducted by US aircraft, was able to advance into the southern suburbs of Fallujah.

However as night fell, some fighters from the Shiite Muslim volunteer militias also began to advance into the suburbs. Rockets and mortars were apparently fired indiscriminately into the city. And many Iraqis also saw footage of Aws al-Khafaji, one of the leaders of a militia, the Abu Fadhl al-Abbas Brigade –often referred to simply as the Abbas Brigades – giving a heavily sectarian speech where he urged his men to “cleanse Iraq of the tumour that is Fallujah”. Later on Iranian military mastermind, Qassim al-Soleimani, was pictured with al-Khafaji and other militia leaders.

Iranian military mastermind, Qassim al-Soleimani, was pictured with al-Khafaji and other militia leaders.

However on the next day, there was a lull in the fighting: The US had apparently stopped assisting because of the unannounced movements by the Shiite Muslim volunteer militias. After further negotiations, al-Amiri himself promised that the volunteer militias would confine themselves to fighting on the outskirts of the city.

Still, over the past few days, the US has ended up only using air strikes to assist Iraqi forces fighting on the southern front in Fallujah – these are the more regular troops led by al-Saedi. There has apparently been no air assistance, or very little, given to those fighting on the northern front in Fallujah – this is where most of the Shiite Muslim volunteer militias are positioned. And the most recent news from the northern front suggests that the volunteer militias have been stalled because of this.

Many of the IS fighters are on the outskirts of Fallujah rather than in the more central city. This is because the outskirts are more rural and it’s easy to hide here; it’s also harder for large troop movements and military vehicles to penetrate into these agricultural zones. Over the past two years the IS group has commonly used the tactic of launching surprise attacks on the Iraqi military from these rural areas where they are hidden.

At a press conference held in Baghdad on May 26, Steve Warren, the spokesperson for the US’ operation against the IS group, was confident that the Iraqi army would soon make it into the centre of Fallujah but that the volunteer militias would remain on the outskirts of the city.

Warren explained that there were around 4,000 Sunni Muslim fighters engaged in the fight to free the mostly-Sunni city.

A major general in the federal police, Raed Shaker Jawdat, told NIQASH that there were around 30,000 members of the Iraqi military engaged in the fighting as well as Sunni volunteer fighters from local tribes. “Over the past few months we haven’t been able to get through the IS group’s defences at all,” Jawdat said. “This time it only took two days.”

“This battle will involve three stages,” Kathem al-Khazraji, an Iraqi army colonel, told NIQASH. “The first is to control the outskirts of the city, the second involves catching the IS fighters inside the central city and the third is to begin attacking the extremists. This battle may take some time but if the US continues to provide us with air cover, we will win.”

There are still an estimated 50,000 civilians – possibly more – trapped inside Fallujah, once a city of around 350,000. In a telephone interview, a resident in the Shuhada area, in the south of the city, told NIQASH that everyone here knows they are not allowed to leave the city.

“The IS fighters are very angry and they won’t let people leave the city,” the resident said. “A few days ago they killed all the members of one of the families that tried to get away.”

Other reports confirm this.

The resident, who could not be named for security reasons, said that the IS group had also held a military parade inside the city in an attempt to convince locals of their superiority. They were also spreading rumours that when pro-Iraqi-government forces enter the city they would kill everybody left inside Fallujah. As a result, the IS rumours said, locals should mobilize to help defend the city. Most people didn’t believe a word of it, the resident told NIQASH.

The people of Fallujah have seen their fair share of hardship and violence. The US army fought here in 2004 because of Sunni Muslim extremists in the city. And since 2014, the Iraqi government has also tried to take back the city several times. It failed every time but this time it seems things could be different because all parties to the fighting – Iraqi government forces, Sunni fighters, Shiite fighters, the US and even Iran – have come to some sort of arrangement.

As the fighting continues and the Iraqi forces seem to be winning, one can only hope that those involved will take heed of the words of Iraq’s most senior Shiite cleric, Ali al-Sistani, who preached that security forces should protect civilians at Friday prayers last week: “Saving innocent people from harm’s way is the most important thing, even more so than targeting the enemy,” the cleric said.