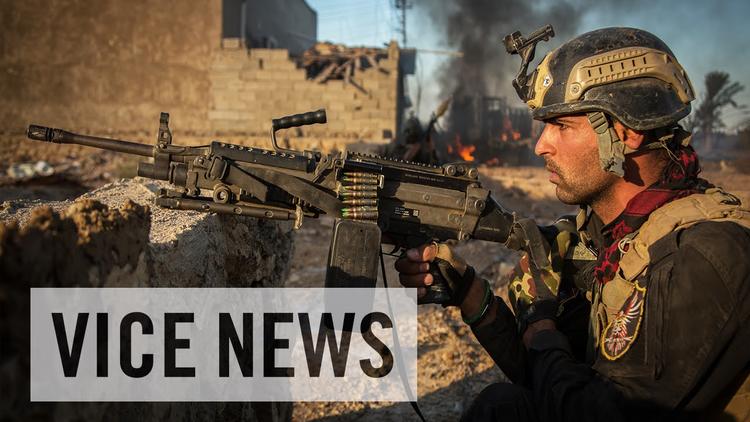 The battle for Fallujah will be long and hard. The Islamic State has prepared for a siege, is relying on foreign fighters and is spreading lies to persuade locals to fight. NIQASH spoke to those on the front line.

In the Nuaimiya area, south of the central Iraqi city of Fallujah, hundreds of members of the Iraqi army’s elite counter-terrorism forces are behind three-metre dirt barricades. Only a few meters away from them are fighters from the extremist Islamic State group. Both groups are firing their weapons at one another continuously.

“After just a few days of fighting we were able to control this strategic area, Nuaimiya, where there is a large dam,” explains Captain Mohammed al-Rubaie, who is fighting here. “The Islamic State had cut off the water to the southern part of the country But now we’ve reached the Shuhada area on the outskirts of the city.”

According to al-Rubaie, since the operation to push the Islamic State, or IS, group out of Fallujah started on May 23, counter-terrorism forces have been attacking from the southern side of the city because it is closer to the city centre and because there are not so many agricultural areas here, where the extremists can hide. The federal police forces and Shiite Muslim volunteer militias have been attacking from the northern and eastern sides of the city. Despite his men’s fatigue, al-Rubaie says the soldiers are still enthusiastic and they are waiting for further instructions to advance. However they also know that any attack cannot begin without US air support.

Still, even the counter-terrorism force has surprised by the IS group’s response and preparation. In the terrain they have captured, they found dirt barricades built by the IS group. The barricades looked like they had been prepared weeks ago, as if the IS group knew which way the troops might come.

At one stage Iraqi commanders believed that the IS group was going to leave Fallujah. Now it seems the battle for the city will be long and hard.

Another surprising discovery were a series of secret tunnels that the IS group apparently planned to use to encircle attackers. The tunnels have caused anxiety among the anti-IS troops, with worries that there are more as yet undiscovered tunnels that could be used to ambush them.

“The security forces discovered a big network of tunnels in southern Fallujah,” Rajeh al-Issawi, a local politician who heads Anbar’s provincial security committee, told NIQASH. “It was used for hiding and secretly transporting weapons around the city. It’s similar to what the IS group did in Ramadi.”

According to reports given to the Iraqi army’s operations room, based in Baghdad’s Green Zone, there are estimated to be between 700 and 1,000 IS fighters still in Fallujah. However they are apparently moving around the city very cautiously out of fear of air strikes by the international coalition.

Information is being supplied by informants inside Fallujah, a senior military commander working in the operations room in Baghdad, told NIQASH; he spoke on condition of anonymity because he was not authorized to speak on the subject. “We get important information from inside Fallujah every day,” the source said. “We still have many informants inside the city who send us word of the extremists’ movements and bases.”

One of the things that the command had heard was that the head of the IS group, Abu Bakr al-Baghdadi, had made major changes to the IS’ military leadership inside the city, stripping Iraqis of power and giving it to foreign fighters.

“A combat battalion, named the Uzbek Battalion, is now fighting the Iraqi army; it has about 300 members from places like Chechnya and Uzbekistan,” the military source in Baghdad said. “Members of this group are among IS’ strongest fighters and they’re deployed in all of the group’s important cities, such as Mosul, Fallujah and Qaim, as well as in the countryside around Aleppo in Syria.”

At one stage Iraqi commanders believed that the IS group was going to leave Fallujah, just as they did other cities like Heet and Al Rutba. However it seems that the extremists have decided to try and defend the city, which they have controlled since early 2014. Now it seems that the battle for Fallujah will be long and hard –it is also clear that all parties will need to cooperate: This includes Iran, the US, the Iraqi army and Sunni and Shiite Muslim militias.

Beatings and torture by volunteer militias have already been reported and one official says the worst cases are not even being documented yet.

During the first week or so, the IS group’s fighters did not initiate any clashes and withdrew from the suburbs into the city centre. On May 28, the IS group first attacked as Iraqi forces approached Fallujah’s southern gates, sending vehicles filled with explosives toward the troops.

The IS group uses dozens of explosive-laden vehicles, suicide bombers and snipers, says Abdallah al-Halbusi, a member of one of the newly formed regiments made up of members of local tribes in Anbar.

“The military vehicles that the IS group stole two years ago are now being used as traps,” al-Halbusi explains. “They can carry a lot of explosives and it’s very hard to stop them.”

The exploding vehicles create chaos and dust, after which dozens of suicide bombers are sent, firing weapons, toward the anti-IS forces. When they run out of ammunition they detonate their explosives and kill themselves.

The IS group also seems to have better snipers than the Iraqi army, al-Halbusi notes. “They target the wheels of military vehicles and then when the vehicles are brought to a halt, they attack,” al-Halbusi explains. “Our only option is to rely on air raids by the US.”

A few days ago the IS group released a video that it said had been filmed in southern Fallujah. It showed a member of the Shiite Muslim volunteer militias beating displaced locals with a stick and insulting them. The video was shot by local witnesses and is thought to be genuine but the IS group simply edited it into a longer video that also contained instructions on how to fight the pro-government forces.

The IS group has also tried to spread rumours saying that if the Shiite Muslim volunteer militias make it into the city, then they will kill the local people and steal their property. In some cases they may not be wrong; beatings and torture have already been reported in the media and by local witnesses. One official says the worst cases are not even being documented. The latest media reports revolve around the deaths of around a hundred locals in the Saqlawiyah area, north of Fallujah, apparently buried in a mass grave.

There is no doubt that there have been lapses of discipline and a desire to take revenge on those they suspect of collaborating with the IS group, among members of the Shiite Muslim volunteer militias. Although many in Iraq see them as heroes and defenders, the volunteer fighters, who are not held accountable by any professional military code, have acted controversially in the past.

One of the militias’ most senior leaders, Abu Mahdi al-Mohandes of Hezbollah in Iraq, apparently tried to make amends for some of these infractions. Al-Mohandes met with some of the displaced people of Fallujah who were living in temporary camps around the city.

“Why do you treat us like this?” one old Iraqi man asked al-Mohandes. “We are Iraqis just like you. Why do you allow a young fighter to slap my face and insult me?”

Thousands of locals who lived on the outskirts of Fallujah have been able to escape the city; many are now staying in areas controlled by the Iraqi government, albeit in some fairly bad conditions. However those residents inside the central city have not been allowed to leave.

“During the first week of fighting the IS group executed a whole family that was trying to escape the city in secret,” Anbar provincial council member, Nahla al-Rawi, told NIQASH. “This created a lot of fear among the city’s population.”