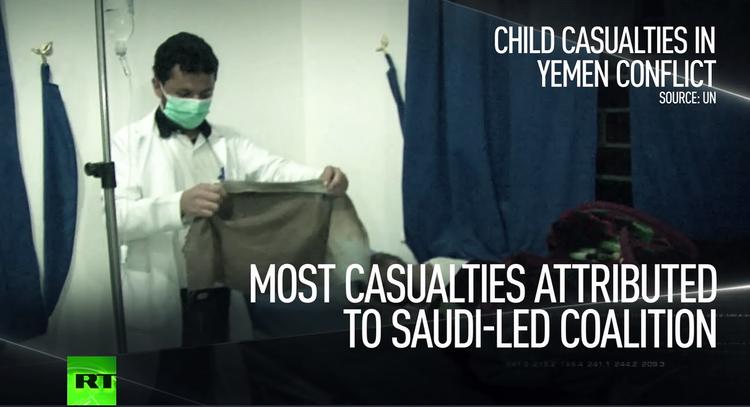 Every year, the United Nations secretary-general releases a “list of shame” of government forces and armed groups that have committed grave violations against children during armed conflict. This year, the Saudi-led coalition fighting in Yemen was listed for the first time, identified as being responsible for killing and maiming children in Yemen and for attacks on schools and hospitals.

There was a six-fold increase in the killing and maiming of children in Yemen during 2015, with at least 785 children killed and 1,168 injured, according to the secretary-general’s report. The Saudi-led coalition was responsible for 60 percent of these child deaths and injuries.

The UN recorded 101 attacks on schools and hospitals in Yemen, double the number of attacks recorded in 2014. The Saudi-led coalition was responsible for nearly half of these attacks. Almost all caused the partial or complete destruction of facilities.

The “alarming” trends have continued into 2016, the secretary-general found. He was “shocked” by the scale of violations. Rightly so.

Since the Saudi-led coalition began its military campaign in Yemen in March 2015, Human Rights Watch has documented 43 airstrikes that have killed close to 200 children, and multiple airstrikes that struck or damaged schools or hospitals, including a school for the blind. In one particularly deadly incident in March 2016, Human Rights Watch found that two US-supplied bombs were used in a strike on a market in the village of Mastaba that killed at least 97 civilians, including 25 children.

Of course, the Saudi-led coalition is not alone in committing grave abuses against children in Yemen. The Houthis, government forces, pro-government militias, and Al-Qaeda in the Arabian Peninsula were also included on the secretary-general’s “list of shame,” as they had been in previous years.

Human Rights Watch has documented repeated violations against children by multiple parties to the conflict, including the Houthis endangering schools by using them for military purposes and using child soldiers. The UN report found that 72 percent of 762 verified cases of child recruitment were attributable to the Houthis, with an overall five-fold increase in recruitment of children and a shift towards forced or involuntary recruitment.

The conflict in Yemen has taken a devastating toll on the country’s children. In order to help end these grave violations, the international community should take immediate action, including suspending arms sales to Saudi Arabia and forming an international mechanism to investigate violations by all sides.