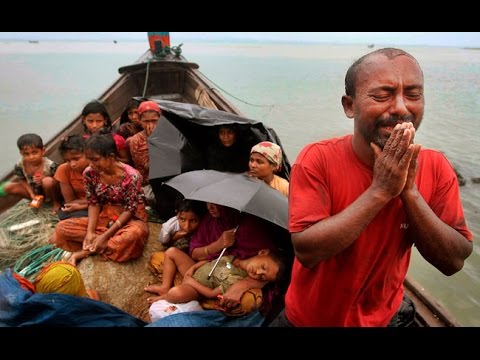 A mob has burned down a mosque in the second attack of its kind in just over a week.

“The problem started because the mosque was built near a (Buddhist) pagoda. The Muslim people refused to destroy the building when the Buddhists discovered it,” Moe Lwin, a local police officer, told the AFP news agency.

The violence erupted on Thursday afternoon as a mob of around 200 Buddhists rampaged through a Muslim area of Thuye Tha Mein village in the Bago province following an argument between neighbors over the building of a Muslim school.

“It started when a Muslim man and a Buddhist women started to argue and then people came to fight him,” Hla Tint, the village administrator, told AFP.

“Parts of the mosque were destroyed … they also destroyed the fence of the Muslim cemetery,” he added.

Around 70 Muslims, including children, sought shelter in a police station overnight on Thursday, he said, adding there were no serious injuries and peace had been restored.

Police and the secretary of the mosque confirmed the damage, while a Muslim resident told AFP his community of around 150 people is now living in fear.

“We had to hide as some people were threatening to kill Muslims. The situation has never been like this before,” Tin Shwe Oo, 29, told AFP, adding his family stayed at the small police station overnight.

Antipathy toward Muslims is deeply entrenched in Buddhist society and few politicians have been unwilling to support them for fear of angering the country’s influential monks and Buddhist majority.

The government’s refusal to tackle rising anti-Muslim violence, particularly against Rohingya Muslims in Rakhine state, has prompted international outcry calling on the government to address the ongoing tension between Myanmar’s majority Buddhist population and its ethnic Muslim minorities.

“The government must demonstrate that instigating and committing violence against ethnic or religious minorities has no place in Myanmar,” said Yanghee Lee, the U.N. Special Rapporteur on Human Rights in Myanmar.

Myanmar’s government does not recognize Rohingya as an ethnic group, arguing instead they are really Bangladeshis. An estimated 1 milllion Rohingya people living in Myanmar have been denied citizenship under the 1982 Citizenship Law, and face severe restrictions on movement, marriage and even reproduction. More than 100,000 refugees are confined to internal camps.