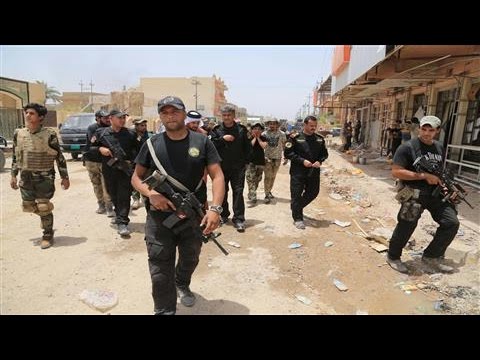 Every time extremists are forced out of Anbar’s cities they take refuge in nearby desert and attack again. Now it seems like the same guerilla war is starting again.

Plenty of effort has gone into pushing the extremist group known as the Islamic State out of major cities in the central Iraqi province of Anbar. And recently there have been a number of announcements that the city of Fallujah, formerly an Islamic State, or IS, group stronghold was now also free of the extremists.

However many of the locals left behind and soldiers still fighting in the area say that the battle is far from over. In fact, the real fight – to keep Anbar clear of extremists – may only just be beginning.

Anbar is a huge province and much of it is desert. There are also plenty of valleys and hills. And all of this provides excellent hiding places for groups like the Islamic State who may be switching to a more guerrilla style of warfare, given that their urban strongholds have been taken back and that the population in those strongholds has tended to turn against them because of their cruelty. It is very difficult for official armed forces to chase down extremist fighters in terrain like this.

In fact, the IS group would not be the first to seek shelter in Anbar’s back country. Since 2004, armed gangs like the IS group have set up training camps in Anbar’s desert – most significantly this included the IS group’s predecessor, Al Qaeda in Iraq. The camps have tended to be set up in the Wadi Horan and Rutba desert areas, turning the Euphrates River into a kind of natural border, separating militant camps from Anbar’s more populated areas.

“The path from eastern Ramadi to Heet make for a significant security threat,” the mayor of the Ramadi district, Ibrahim al-Awsaj, told NIQASH. “The Islamic State group was expelled from Ramadi city but it still poses a danger as the fighters try to infiltrate some of the outlying villages from time to time.”

Since the IS group was pushed out of Ramadi late in 2015, there have been a number of attacks from the north western side of the city. “From the Albu Ali al-Jassim side, and they targeted the villages of Tawi and Zankura,” al-Awsaj explained. “So there are still military operations taking place to try and get the terrorist gangs out of this desert area, and to stop their attacks.”

The areas where the extremist gangs camp are well known, al-Awsaj points out. “But up until now all efforts have been focused on the cities,” he says. “We all know that this will not be enough. Our security forces will always be threatened and always on the defensive. This is depleting both the human and financial resources of the local government and the central government.”

“The cities in Anbar will continue to come under threat from the desert areas because they have not yet been liberated,” says Major General Tariq al-Asal, who commands volunteer militias in Anbar and was formerly the police chief in Anbar. “These areas are a threat to the Habbaniyah and Khalidiya areas as well as to the Habbaniyah military base. And there are also other dangerous areas, from the Albu Ali al-Jassim area extending all the way to the Syrian border.”

In the land north of Fallujah there are many back roads connecting Mosul, the IS group’s remaining urban stronghold in Iraq, with their base in Syria, the city of Raqqa. These back roads allow IS members to travel secretly and safely between Iraq and Syria and are not under any kind of control by Iraqi security forces, which have been busy fighting in the province’s cities and more populated areas.

“Our troops are fighting on several fronts in Anbar,” al-Asal continues. “And they want to clear the cities of the extremists before embarking on an extensive operation to clear out the desert areas too. Both the Iraqi army and volunteer militias are dealing with continuous attacks as the extremists try to regain control of some of the areas they’ve been pushed out of, particularly in the Zankura and Albu Rishah areas, as well as parts north of Heet.”

“On more than one occasion the local government has asked for forces to clear extremist gangs out of the Anbar desert. But every time excuses were made. There has not been any larger military operation in the Anbar desert since 2004. There was one operation in 2013 that saw some of the Iraqi army’s top men killed, including Mohammed al-Karawi. Not taking this problem seriously has cost much money and many lives,” al-Issawi argues. “Basically allowing these terrorist groups to thrive in the desert means that there is a constant threat posed to, not only the province, but also the country and the region.”

Al-Issawi believes the answer lies in the formation of a special military task force that could be trained in how to deal with extremist camps in the desert and well equipped. “The members of this task force should be chosen from among the sons of this province, who know the desert and the geography better than anyone,” al-Issawi concludes.