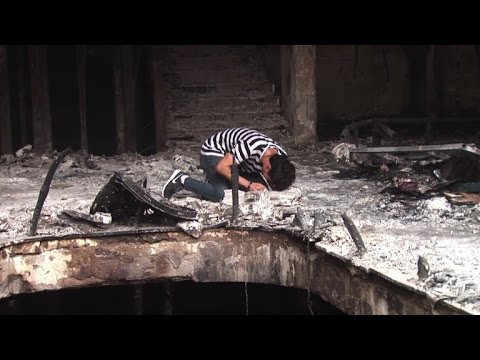 “I’m happy that I graduated. I’m so grateful to my parents and I dedicate my success to both of them.”

These were the final words written by Adnan, a victim of a deadly attack on Sunday’s early hours in the crowded, buzzing street of Karrada in the heart of Baghdad. An explosives-laden track exploded near a restaurant and multi-story shopping centre where people were shopping for Eid, the festival ending the holy month of Ramadan. The explosion was so large that it set fire to adjacent buildings and stores. It was soon claimed by Islamic State (IS). More than 200 people are now known to have died.

Just days before the attacks, the UN issued a statement warning of terrorism by IS during the last days of Ramadan, and called on the Iraqi Government to take extra measures to increase security. But it seems that the warning was in vain.

Blocked roads around the area delayed the arrival of firemen and ambulances by approximately 20 minutes. Trying to escape the blaze, young people who had gathered to watch the quarter-finals of the European football championship were trapped on the roof until they burned to death or suffocated. Burnt bodies were still being removed from the rubble of the destroyed buildings hours after the attack, and with official crews overwhelmed by the task, local people took on the grisly duty.

IS generally cloaks its attacks on Iraqis in the same sectarian narrative that it has used since it proclaimed its Caliphate in July 2014. It tends to escalate its derogatory language in response to military defeats on the ground, in this case Iraqi forces’ recent recapture of the city of Fallujah. But despite IS’s claims that it was mainly targeting Shias, the diversity of Karrada made this an atrocity an attack against all Iraqis, be they Shia, Sunni, or Christian.

Although a mainly Shia-inhabited area, Karrada is home to many Iraqis of other faiths. A popular commercial destination and a famous cultural hub, it’s known as “the bride of Baghdad”, an attraction for all Iraqis in the capital and beyond.

Unfortunately, far from being challenged, the “Shias versus Sunnis” theme is still lazily rehearsed in much of the mainstream media. But while the mainstream media fails to challenge IS’s sectarian propaganda, Iraqi activists, bloggers, and citizens are constantly trying to establish a counter-narrative, encouraging a language of unity and highlighting national identity beyond ethnicity or religion.

They back this up with grassroots efforts to help their fellow citizens. While displaced people from Fallujah have been largely ignored by politicians, humanitarian convoys by young Iraqis of all backgrounds and from all regions have been quick to head to the camps at Bzibiz Bridge to try and alleviate the terrible conditions there.

Now Sunnis, Shias, and those of other sects are heading to hospitals to give blood to Karrada’s wounded. They are doing so in areas that remain extremely dangerous and insecure. Sunday’s car bomb was only the latest in a series of near-daily suicide attacks, mostly targeting crowded streets.

While new security plans are often announced, they are mostly routine and lack an effective strategy to prevent or, at least, minimise the number of car bombs and other attacks. Fake bomb detectors are still used at checkpoints, with no steps taken to provide the real alternatives. There is no effective intelligence effort to look for IS’s sleeper cells in the capital.

The buzz of tweets, posts, and hashtags since the attack reveals the anger of Iraqis who demanded that serious security measures be taken, including replacement of the fake bomb detectors. True to form, the Iraqi prime minister, Haider al-Abadi, responded to the latest attacks with a seven-point list

Most of this is routine stuff, which few Iraqis can expect to either be fully implemented or to make much of a difference. But the security failure is only a symptom of an underlying sickness: Iraq’s endemic corruption, which has infected the country’s political elite and all its major institutions.

Over a decade now, millions of dollars have been spent on security training, plans, and strange transactions ostensibly meant to pay for an effective security system. None of these have worked. Amid growing concerns for such corruption, Iraqi people will wonder why such measures have not been pursued earlier, or whether they will be effective now.

Following calls on social media, people gathered on Sunday evening to protest against terrorism and the government’s repeated failures to protect its citizens. They chanted the Iraqi national anthem and paid tribute to victims with candles, tears, and prayers. Local sources reported that victims’ families gathered outside the fortified Green Zone, but were dispersed by security forces. The day after the attack, the calls for further protests and strikes continued.

All the while, messages are being sent from around the world to support the Iraqi people. That global sympathy will not end their agony – and nor will the UK’s imminent inquiry into its role in the 2003 invasion – but it could at least offer a flicker of hope.

That hope is desperately needed. Karada’s attack is the deadliest single attack of the year so far, but it will surely not be the last.