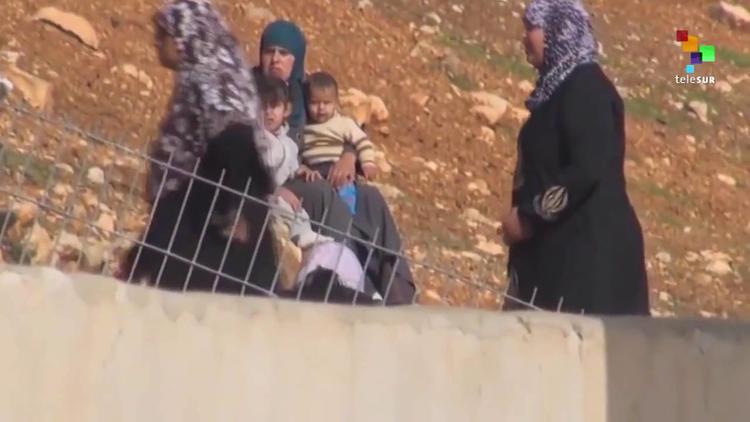 RAMALLAH (Ma’an) — Israeli authorities have been conducting a land survey in the southern occupied West Bank near Bethlehem in order to declare state lands to build a new settlement, a move which Palestinian Prime Minister Rami Hamdallah called “another step towards cutting the West Bank in two” on Monday.

In a statement released on Monday, Israeli NGO Peace Now said the Israeli government had notified the Israeli Supreme Court on Aug. 10 that it had begun a land survey in the area of the Palestinian village of Nahla in the West Bank district of Bethlehem, with the aim of declaring “state lands” in the area.

Israeli authorities have discussed plans for the creation of the Givat Eitam settlement for years, to be located past the Israeli separation wall inside the West Bank, and meant to host some 2,500 housing units, according to blueprints from the Israeli Ministry of Construction and Housing.

“The installation of this infrastructure will be possible if and when the land survey now underway is completed in the area between Efrat and Givat Eitam in a manner that creates contiguity of state lands,” the state document to the Supreme Court read, as quoted by Israeli newspaper Haaretz.

The announcement by the Israeli government came after Peace Now petitioned to the Israeli Supreme Court, demanding more transparency from the state of Israel regarding the plans, so the group could appeal the decision ahead of time.

The Israeli government responded to the petition saying it would make its intentions public a month prior to signing a land allocation contract, Peace Now reported.

Hamdallah slammed the move as further separating the city of Bethlehem — which is already surrounded by settlements and Israeli-only roads on three sides — from the rest of the southern West Bank and preventing any future Palestinian expansion in the area.

“Israel’s move to build a new illegal settlement and bypass road next to Bethlehem is another step into cutting the West Bank in two, and annexing Area C,” said Hamdallah, referring to the more than 60 percent of the occupied West Bank under full Israeli control. “Israeli authorities are doing their best to destroy the historic character of Bethlehem.”

Local residents near Nahla have reported Israeli forces leveling lands in the area over the past several days near the settlement bloc of Gush Etzion.

Jamal Dajani, director of strategic communications at the Prime Minister’s office, said that “the international community has an obligation to stop Israel’s illegal and ongoing land theft, before there is nothing left of Palestine.”

Meanwhile, Haaretz quoted the Efrat settlement regional council as saying that it was “happy that the state is seeking to redress an injustice of years,” adding that efforts by groups such as Peace Now to counter settlement expansion were “trying to sabotage the building of the Land of Israel.”

In July 2015, Peace Now revealed that Israel’s Civil Administration was planning to allocate land for 800 settlement housing units in the area, despite orders by Israeli Prime Minister Benjamin Netanyahu in 2013 to cancel planning tenders for the planned settlement of Givat Eitam.

The declaration of state land in the area, combined with 300 dunams of land already owned by the Jewish National Fund (JNF) — an organization that works to “reclaim” and repurpose land for use by Jewish citizens, often at the expense of Palestinian right to land and control of resources — would pave the way for the establishment of the new settlement in a zone Peace Now called E2, in reference to the E1 settlement corridor in the area of occupied East Jerusalem.

“A new settlement in E2 will pose a serious blow for the possibility to reach a two-state solution and establish a viable Palestinian state alongside Israel,” Peace Now deplored on Monday. “The government’s efforts to appropriate lands and connect Givat Eitam with the settlement of Efrat are another step on the way to a one-state reality.”

While members of the international community rested the solution to the Israeli-Palestinian conflict on the discontinuation of illegal Israeli settlements and the establishment of a two-state solution, Israeli leaders have instead shifted farther to the right as many Knesset members have called for an escalation of settlement building in the occupied West Bank, and with some having advocated for its complete annexation.

The Palestinian Prime Minister’s office said in a statement on Monday that Israeli settlements — which are illegal under international law — control some 42 percent of West Bank land, whether through housing, agricultural and industrial facilities, roads, and other infrastructure.

Related video regarding another settlement: