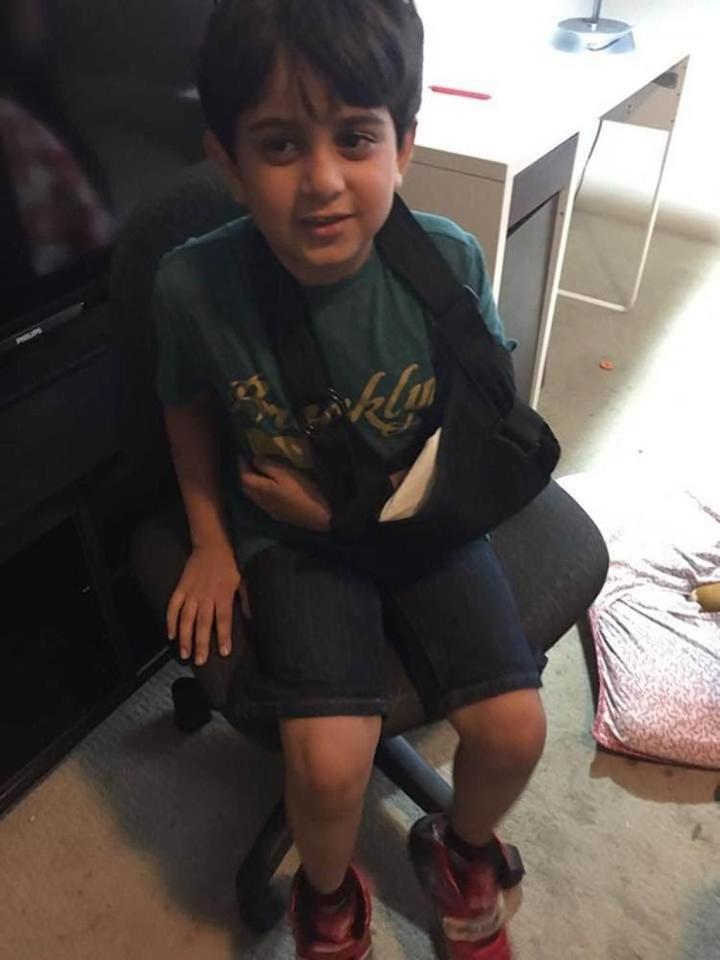 After a series of violent attacks and recrimination, an esteemed Muslim academic flees the U.S.

Abdul Aziz returned home from school last week, his face bruised, his body battered, after schoolmates punched him in the face, kicked him in the stomach, and twisted his arm while chanting “Muslim.”

For the boy’s mother, Binish Bhagwanee, this was the final straw.

“I’m done with the U.S.,” she told her husband, Zeeshan-ul-hassan Usmani Friday., according to the Huffington Post.

The first grader is the North Carolina couple’s youngest child, who has been left traumatized by the incident.

“He was born and raised (in the United States). He was born in Florida. As American as you can think of. He likes Captain America. He wants to be president of the United States of America,” Usmani told The Huffington Post Tuesday, speaking over Skype from Pakistan, where the family has since fled.

Usmani’s middle son, who is 8 years old, also returned home from school one day recently, distraught by a classmate’s ridicule: apparently, they had told him his dad―a Pakistani man with a beard―was a terrorist.

“He asked me if I was a terrorist,” Usmani recalled.

The school went on lockdown, and the teenager was suspended for six months. Usmani’s son has been homeschooled ever since but continues to suffer from depression and anxiety.

Earlier this year, a neighbor harassed the family, once threatening Binish.

“He came to our apartment twice at midnight and at 2:00 AM, passing racial slurs, teaching us how to ‘behave’ and “’live in this country,’ mentioning Donald Trump and his desire to vote for him to kick us out of this country,” Usmani wrote in an email to the Cary Police Department in July.

This summer, at the mosque the family attends in nearby Fayetteville, North Carolina a man appeared with a handgun threatening to kill congregation-goers and bury them behind the mosque. The man, Iraq War veteran Russell Thomas Langford, also left bacon outside the mosque, as an affront to a religion that refrains from eating pork.

Just last month, the Fort Pierce, Florida mosque where Usmani attended prayer services when he was a student, and where Omar Mateen, the gunman who committed the June mass shooting at the Pulse gay club in Orlando went, was set afire. The accused arsonist, Joseph Schreiber, had posted anti-Muslim, and pro-Donald Trump rants, on his Facebook page in the months leading up to the attack.

All this happened in the last year, the same year in which U.S. Republican presidential candidate Donald Trump proposed a ban on Muslims entering the country, a national database to track those who already live in the U.S., and surveillance of mosques.

As 2016 has seen the most hate crimes against Muslims since 2001, Usmani’s family felt they had no choice but to leave the United States. The family was thinking of moving out of their Cary, North Carolina home anyway and to Berkeley, California, where Usmani’s employer is, but after Abdul Aziz’s altercation at school, they decided to head back to Islamabad, Pakistan.

The irony is that Usmani is an award-winning scholar whose 21-page resume includes a Ph.D, two Fulbright scholarships, and and Eisenhower fellowship. In his former job as the chief technology officer of the Internet company PredictifyMe, he has also collaborated with the United Nations Special Envoy for Global Education to develop software that models the damage of suicide bombings to protect buildings in Pakistan, Sudan, Nigeria, and Syria from terror attacks.

While Usmani will split time between Pakistan and the United States because of his work, his family would consider moving back to the country if Donald Trump loses the election next month, saying they would “absolutely” feel safer then.

But their country of origin is also not safe for the family.

“On our way back from the competition, we got robbed,” Usmani wrote in an email to friends and colleagues at the time, as The Huffington Post reported. “They were 9 Dacoits, they beat me up very badly, beat my wife and 10 years old son and took away all the cash, mobiles, laptop, camera, all debit/credit cards everything. So now I have a lazy eye, injured rib, and few less teeth.”

Usmani told The Huffington Post he believes he was attacked because of his work in counter-terrorism, which some see as an alliance with the U.S., which has repeatedly bombed sites in Pakistan since the beginnning of the war on terror 15 years ago.

“I’m in a very interesting dilemma,” he said. “I guess I can’t live anywhere in the world.”