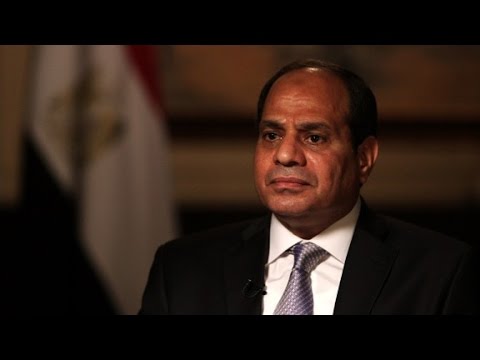 “When the people love you, that is the most important thing for me.” So spoke General Abdel Fattah el-Sisi, the onetime savior and now iron-fisted tyrant of the Arab Republic of Egypt, days after he had seized power in a military coup in July 2013. Egypt’s coup was ostensibly a response to popular frustration with the inept and anti-democratic administration of the Muslim Brotherhood’s Mohammad Morsi. But in reality, Sisi never had any intention of returning Egypt to the Egyptians. As in so many places, the Egyptian state is an ATM for its elites, who enrich themselves at the expense of the broader public and do not bother offering an apology.

But the demagogue always rides to power on the wings of resentment and popular frustration. Egyptians long suffering under the inept economic administration of its military, terrified of the looming theocracy represented by Morsi, and drunk on paranoid agitprop about American machinations, poured into the streets by the millions to demand Morsi’s ouster. Sisi promised “national reconciliation.” What he delivered instead, of course, was a predictable reshuffling of the hierarchy of authoritarianism – a familiar beast with a new haircut, just two years after the inspirational ouster of longtime dictator Hosni Mubarak. To spend time in Egypt is to understand how quickly jubilation can turn to despair. And now it is our turn.

The American people, dispiritingly, delivered our very own Sisi to power on Tuesday night. Donald Trump had no one on his side but his voters – not the Republican intelligentsia, which abhorred him, not the party apparatus, which worked halfheartedly on his behalf, and certainly not the Democratic opposition, which was united in revulsion at the prospect of this man becoming our leader. A friendless, cheerless sociopath, Trump ingeniously exploited the cultural and economic resentment of the Unnecessariat: the mass of downwardly mobile white voters who feel shunned and discarded by their own leaders and who have no place in the global economy and no real help from the state. That Trump’s policies will only make their plight worse is beside the point. That they rejected the candidate offering to alleviate their suffering with a more interventionist government is an argument that either did not reach them or was rejected. The more troubling realization is that they allowed themselves to be taken for the ride, and that the Democratic coalition could not be bothered to turn out in large enough numbers to stop the catastrophe, or to craft a winning message that might appeal to the downtrodden. Like Sisi, Trump wants to be loved by the people to whom he has falsely promised deliverance. And make no mistake: his voters love him.

Trump will be the most manifestly unprepared man to ever assume the presidency. Even straight-from-the-military types Eisenhower had been in charge of large, complex organizations and had shown some flair for leadership and ideas. And here is one thing that the Democrats (including this author) need to internalize for the next election: voters truly no longer care (if they ever did) about statesmanship and experience in office in their leaders. From Obama to Trump, what people seem to respond to is a vision rather than a resume. You can lament this all you want, but the American people have delivered a verdict on the kind of leadership they expect, and it is not a former Senator and Secretary of State with a long record of successful public service. It is a man (it is always a man) who makes wild promises that he will rescue them from the struggles of late modernity.

For all of the justified warnings about how Trump might obliterate democratic procedures and norms, it is still not clear exactly how he will govern. This is particularly true because the man is a shapeshifter with no discernible political philosophy beyond rage and fear and resentment. Yet those of us who arrogantly trumpeted our certainty about a Clinton win should now be circumspect in our predictions for his administration. It is possible that his rule will be disastrous within normal parameters – cutting taxes for the wealthy, blindly stumbling into wars, worsening our racial crisis with law-and-order hysteria, tightening immigration policies without actually rounding up and deporting 11 million people. It is within the realm of plausibility that he will pursue policies, like protectionism and massive infrastructure spending, that will fracture his own Congressional coalition, even with substantial Republican majorities in both chambers. He may drastically overstep his authority, or embroil himself in scandals so obvious that even the Republicans may be forced to act. And as his policies will almost certainly be economically and socially catastrophic, the republic may yet survive his four years in office and dutifully turn him out when the scale of the calamity becomes clear even to his supporters. There is a subzero chance that Donald Trump will be a competent leader, and in normal times, that would be enough for him to be defeated.

Yet it is equally plausible that Trump will keep his open promises to burn the Constitution. Together with Republican governors and legislatures, Trump will continue to chip away at things like voting and abortion rights. He will be ruthless in his quest to delegitimize his opposition, and the rumors about appointing full-blown maniacs like Rudy Guliani and Newt Gingrich to his cabinet bodes ill for his administration’s impending respect for the rule of law. He will have a compliant legislature that is unlikely to take seriously its oversight functions and almost certainly cannot be trusted to hold Trump accountable for his promises to hound and sue the press and his accusers. His reckless disregard for the Bretton Woods order suggests that he sees only the flaws of globalism and none of its attendant benefits. Terrified allies are likely to seek comfort in new relationships and to pursue destabilizing defense measures to protect themselves against the Russian and Chinese giants that Trump seems to admire. The risk of global war, possibly of the nuclear variety, is seriously heightened. It is not inconceivable that Trump will use the full power of the state, including a vengeful FBI, to destroy the Democrats’ chances of retaking power in 2020. If so, American democracy will have functionally collapsed, albeit in slow motion.

There are two pieces of solace we might take in this darkest of moments. One is that, unlike Egypt, Trump will surely meet some resistance from the political opposition. The Democrats were bested in this election but they have not disappeared. Egyptians themselves have demonstrated for us that it is possible to use social movements to challenge the power of a much more securitized and entrenched authoritarian government. The Egyptian people, caricatured as complacent and broken, will at some point come together again and demand that the state recognize them. So will we. While the left did not turn out for Clinton in sufficient numbers, the youngest members of our society are energized – crestfallen today but determined to seize back the hopeful future that has been denied them this week. For further solace, you need to look no further than your own social media networks, where devastated Americans are grieving but transmitting a clear message of hope and resilience. They will not have their democracy taken from them without a spirited fight. They will take to the streets. They will overcome the noxious and racist barriers that have been put in front of them by a transparently undemocratic Republican Party that cares for nothing beyond its own aggrandizement.

The university that I am privileged to call my home is peppered with quotes from its namesakes, Franklin and Eleanor Roosevelt. Today when I arrived at work to face my downcast students, I saw these words again in a new light. As I wiped away the most bitter tears I have ever cried, before heading to teach, I paused for a moment. Posted in front of the elevator was FDR’s famous remark that “No democracy can long survive which does not accept as fundamental to its very existence the recognition of the rights of minorities.” It is those rights that Trump and his supporters are most determined to violate. But neither time nor demography is on their side. Someday – maybe not in 2018 and maybe not even in 2020 – the American people will come together and demand that those rights be recognized and respected and enshrined in law, in a social democracy that offers hope and support both to the white Americans that delivered the presidency to Trump, and to the beautiful collage of races and ethnicities and genders that is emerging as our society’s tumultuous majority.

We are all menaced by a Trump presidency and its promise to shred the social welfare system, repeal Obamacare, obliterate Planned Parenthood and more. These policies will touch everyone and the effects will be painful. But let’s not kid ourselves: some of our fellow citizens are more vulnerable than others, most of all the Latino immigrants he threatens to deport, the women whose reproductive freedom and rights he promises to violate, the African Americans whose movement for justice he promises to crush with overwhelming force, and the Muslim-Americans against whom Trump has whipped his followers into a delirious frenzy. Those of us with the privilege and security to fight on must do so. Now is not the time for despair. It is the time to decide which side you are on and to join the struggle. To do otherwise—to give in to the hopelessness of this shocking and horrible moment—would be the most profound and destructive abdication of our obligations to one another as human beings, to the shared project of progress and equality, and to the very idea of a political community.

That struggle begins now. We are unbroken, and we will prevail.

CNN from last month: “Egypt president: No doubt Trump would be a strong leader”