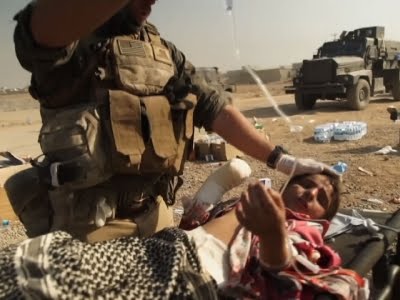 All Forces Should Take Necessary Precautions to Protect Civilians

(Erbil) – In areas around Mosul, the Islamic State, also known as ISIS, is forcibly evacuating civilians under their control with its fighters, apparently to use them as human shields. There are also grave concerns that ISIS is rounding up hundreds of men and executing those formerly linked to the security forces.
Smoke rises from clashes during a battle with Islamic State militants southeast of Mosul, Iraq on November 3, 2016.

ISIS should cease putting civilians at risk by forcing them to accompany their fighters, including into areas of active combat. Using civilians as human shields is a war crime. Forces fighting ISIS should take all feasible precautions to protect civilians during attacks. They are prohibited from conducting indiscriminate attacks and should not use explosive weapons with wide-area effects in populated areas, Human Rights Watch said.

“The use of human shields by ISIS is just their latest cruelty against beleaguered civilians,” said Lama Fakih, deputy Middle East director. “But the horrors inflicted by ISIS do not give anti-ISIS forces a pass to attack ISIS forces without regard to the safety of the civilians in their midst.”

On October 17, 2016, the Iraqi central government and Kurdistan Regional Government authorities, with the support of an international coalition, began military operations to retake Mosul, Iraq’s second largest city, which ISIS captured in June 2014, and surrounding areas including the town of Tel Afar, 60 kilometers west of Mosul. The anti-ISIS forces have also encircled the city of Hawija, 120 kilometers southeast of Mosul, which ISIS captured in June 2014, and have begun operations to retake the city.

“The use of human shields by ISIS is just their latest cruelty against beleaguered civilians. But the horrors inflicted by ISIS do not give anti-ISIS forces a pass to attack ISIS forces without regard to the safety of the civilians in their midst.”

Four men from the sub-district of al-Shura, 40 kilometers southeast of Mosul, which Iraqi forces retook on October 29, said that ISIS fighters ordered them and their families to leave the village under ISIS escort on October 24, and walk toward the village of al-Suruj, one and a half kilometers northwest, toward Mosul. They said that the village had a population of about 6,000 families at that time. They said that ISIS went door to door, clearing the village, and that they saw the fighters fire in the air above the home of at least one family who resisted the order. One said that ISIS fighters told him they were forcing the families to go so ISIS could provide food for them in al-Suruj, since food had been in short supply in al-Shura since the Mosul operations began. The men said they believed ISIS was actually forcing them toward Mosul to use as human shields.

The men said their families were able to get to safety when Iraqi Federal Police in Humvee vehicles, supported by aircraft, flanked their column, causing the ISIS fighters to flee toward al-Shura alone. The Iraqi Federal Police then drove the families to Qayyarah, a town outside of the combat zone, 23 kilometers away.

The United Nations Office of the High Commissioner for Human Rights (OHCHR) reported on October 28, that, “At least 5,370 families were abducted by ISIL [ISIS] from Shura sub-district.” OHCHR said that, “Forced out by gunpoint, or killed if they resist, these people are reportedly being moved to strategic locations [where] ISIL fighters are located.”

Five local police officers from the ISIS-controlled village of Hammam al-Alil, 30 kilometers southeast of Mosul, now in Jadah camp, said that since the Mosul operations began, ISIS fighters had pushed thousands of families from the 106 nearby villages and neighborhoods into Hammam al-Alil.

OHCHR said in its October 28 report that, “Information received indicates that 60,000 persons are currently residing in Hamam al-Alil, an ISIL stronghold with a previous population of 23,000.”

Several officers who arrived at Jadah camp on November 2, said that ISIS had announced that morning that all new arrivals from the neighboring villages should gather at specific locations, including schools, to receive assistance. One of the policemen told Human Rights Watch that he doubted this was the reason for the order because he heard two ISIS fighters having a discussion about how many families would be taken north to Mosul. A second officer said he believed ISIS was taking the families to Tel Afar. Another said he saw two large buses and three trucks heading toward one of the schools.

In a November 1 report, OHCHR said it had received reports that at about 1 a.m. on October 31, ISIS brought dozens of long trucks and mini-buses to Hammam al-Alil, “in an attempt to forcibly transfer some 25,000 civilians towards locations in and around Mosul.” It said that most of the trucks were prevented from proceeding toward Mosul due to coalition aircraft in the area. OHCHR said the trucks were forced to return to Hammam al-Alil, but that some buses reached Abusaif, 15 kilometers north.

Under the laws of war, military forces that deliberately use civilians to protect their forces from attack are committing the war crime of “human shielding.” ISIS should instead allow civilians to go to safer areas to avoid fighting. The presence of ISIS fighters among civilians does not absolve anti-ISIS forces from the obligation to target only military objectives. Anti-ISIS fighters, including in Tel Afar, should take all feasible measures to avoid civilian harm.

Residents of al-Shura and Hammam al-Alil told Human Rights Watch that they were also concerned that ISIS was rounding up former police officers and members of the Popular Mobilization Forces (PMF), a government-allied armed group known as the Hashd al-Sha’abi, and executing them.

One al-Shura resident said that in the days before he left his village he saw ISIS fighters taking police into custody, and had heard from their families that policemen in neighboring areas had also been rounded up, all for execution. He said ISIS apparently feared the policemen would attack ISIS fighters as anti-ISIS forces approached. Another said that from October 18 to 20, he saw ISIS fighters driving trucks filled with about 500 local policemen toward an agriculture college campus. He said he did not see the policemen again, and the trucks returned empty.

Another resident said that on October 16, he watched ISIS fighters shoot and then behead a former brigadier of the Iraqi Army after reading a charge against him that an Iraqi flag had been found in his house.

The five Hammam al-Alil police officers said that at 11 a.m. on October 20, an ISIS commander announced over the loudspeakers in three Hammam al-Alil neighborhoods that all men and boys over age 12 were required to gather at a nearby bridge. Worried that they might be targeted because of reports elsewhere of ISIS rounding up security force members, these officers and at least 65 others hid in friends’ homes.

One officer said that a friend went to the bridge and saw about 1,500 men gathered. He said ISIS separated out about 75 men who had been police or PMF members before ISIS took control of the area, loaded the men onto seven minibuses and drove away, letting the remaining men go home.

Some of the policemen who had hid escaped later that day to an abandoned hamlet along the Tigris River a few kilometers away. One said they hid in the empty homes and at about 9 p.m. he saw the corpses of four men floating down the river. He was not able to recognize the men but said that the bodies were intact, indicating that they had recently been killed and thrown in the river.

The policemen hid in the abandoned village for seven days, then fled to an Iraqi military checkpoint 18 kilometers away.

The accounts by the al-Shura and Hamman al-Alil residents are partially consistent with UN reporting. The October 28 OHCHR report said that ISIS had killed 232 civilians two days earlier, including 190 former Iraqi Security Forces personnel from al-Ghazlani military base in Mosul: “It appears that a day earlier many of these men and their families had been forced by ISIL from Shura and al-Qayyarah sub-districts, and were initially taken to Hamam al-Alil, where the men were separated from the women and children.” A November 1 report stated that on October 29, 40 former Iraqi Security Force soldiers were killed and their bodies thrown in the Tigris River in the areas around Shura and Hammam al-Alil.

The laws of war prohibit the deliberate killing of civilians and captured or incapacitated soldiers. All those responsible, including as a matter of command responsibility, are culpable for war crimes.

“Executing those in custody, whether civilians or captured combatants, is a war crime,” Fakih said. “Responsibility does not just rest with those who pull the trigger, but commanders who give the orders or know what’s going on and do nothing to stop it.”