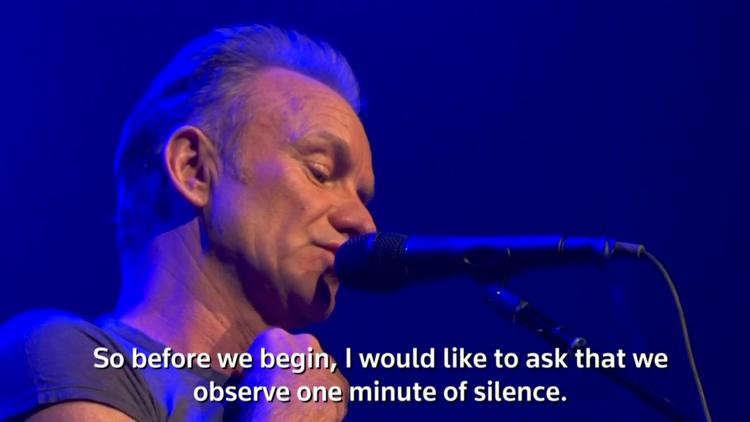 Sting, 65, played a concert at the Bataclan Theater where ISIL terrorists killed 90 innocent people a year ago, in one of the worst attacks in the West in recent years. Although the attackers appear to have told their victims the strike was in revenge for French intervention against Daesh (ISIS, ISIL) in Syria, in fact it was probably the other way around. France only started flying missions against Raqqa, Syria, in late summer of 2015 because it got word that the organization was planning such an attack, and hoped to disrupt it.

In part, Daesh was hoping for a white backlash against French Muslims, which might drive them into the arms of the radicals and sharpen contradictions.

In part, such terrorism aims at hurting a powerful enemy. Terrorism is a weapon of the weak. Daesh doesn’t actually have many positive assets, though it can cause destruction. It just has a few tens of thousands of fighters and is already in the process of losing most of its territory. Its leaders wanted to raise the cost for France of intervening against it in Syria, Mali and elsewhere. Hitting a country with a big tourism industry (7% of the French economy) with a terrorist attack on places like a Cambodian restaurant and a music venue is intended to inflict long-term economic harm. Moreover, they hoped to make an object lesson of France, in an attempt to intimidate other powers.

The terrorists did succeed in harming the Paris economy, which attracted 1.8 million fewer tourists this year than last, a loss of about a billion dollars. Hotel room occupancy was down 12% in the capital. The French government will also probably end up paying, over their lifetimes, some €300 mn. in health benefits to those wounded in the attacks of 2015.

It is easy to talk tough about carpet bombing the terrorists, but these were petty criminals from the slums of Paris and Brussels, and can’t be hit from the air. Even bombing Raqqa is fairly useless unless it is in support of advancing ground troops.

It is also easy to blame all Muslims for the actions of a tiny fringe and to talk about barring Muslims from traveling, though if you did that systematically you’d cut 1.6 billion people out of the global travel industry and that would bankrupt some of these companies. Moreover, hating on Muslims is precisely what the terrorists wanted you to do, so why be their patsies?

One step anyone who can afford it and who feels strongly about pushing back against al-Qaeda and Daesh terrorism can take is to plan the next vacation in Paris. Paris is perfectly safe, safer than most American cities. You are much more likely to fall down in your bathtub and hurt yourself than you are to encounter terrorism in Paris. And by having a nice vacation in the French capital, you can defeat the dastardly Daesh plan of harming that country.

While you’re at it, make a side trip to the beautiful Tunisia, and spend some money there, too.

We can crowdfund an effective response to terrorist attacks on the economy aimed at harming tourism. That is part of what I mean by Gandhian anti-terrrorism tactics.

Here is what I wrote in this regard last summer:

“Reject fear and reject hate. Find a local Muslim and shower that person with love and respect. Speak out against Islamophobia. Work to strengthen democracy and inclusiveness and basic human rights. Stand up for the raid on the Bastille of 1789, and the freeing of prisoners of conscience. Invest some billions, not measly tens of millions, in success stories like Tunisia, to promote democracy and economic growth.”

So if you were planning a vacation abroad anyway, make it Paris instead, or Tunis. Undo the terrorism by having fun and spending a little money. Turn the world cheerful and bright and chase away the shadows of fear. A great man said that the only thing we have to fear is fear itself.