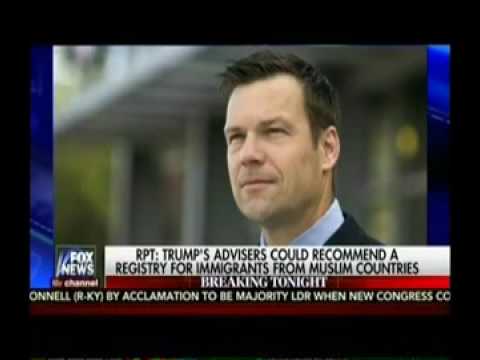 Trump adviser Carl Higbie told Megyn Kelly on Fox “News” that the new administration wanted to create a registration list of US Muslims, and he compared this step to the interment of the Japanese Americans during WW II:

“It is legal. They say it’ll hold constitutional muster. I know the ACLU is going to challenge it, but I think it’ll pass,” Higbie said. “… We did it during World War II with Japanese, which, you know, call it what you will, maybe —”

What is truly weird is that Higbie volunteered to compare such a registration list to the internment of Japanese Americans. It raises questions of just how far zealots such as he are willing to take this hatred of Americans of Muslim faith.

The internment of Japanese-Americans was not a policy precedent but a massive crime against innocents who had not been proven to have done anything wrong. Many Japanese-Americans fought bravely in the US military even while their families had lost their homes.

This is sort of like saying, of course the Federal government can commit genocide. Why, we did it to the Native Americans.

Just on moral grounds, Higbie’s proposal is creepy, and it immediately harmed the morale of Muslim-Americans and harmed the image of the US in the Middle East.

Here are the reasons Higbie is wrong and likely such a registry would be struck down by the courts:

1. Islam is a religion. No one reasonable person denies this simple fact. The first Amendment of the constitution forbids the Federal government to prohibit the free exercise of religion or to favor one religion (Establishment) over another. So you can’t register one religious community without the others. That would be a de facto Establishment of e.g. Christianity. Moreover, making members of only one religion register would interfere with their free exercise of their religion. The only way the government got away with the internment of Japanese Americans was by a specious argument from national origins, suggesting that Japanese-Americans could not remain loyal when their two countries were at war. If the Roosevelt administration had tried to round up all Buddhists in the country, that measure would have been struck down.

2. The Right wing talking point that non-citizens in the US are not protected by constitutional rights is a falsehood, as demonstrated by a series of Supreme court rulings.

3. The Supreme Court case Ex Parte Endo found that the US government had acted improperly and that individuals could not be removed from their homes unless there was proof that they as individuals had acted disloyally. In other words you can’t punish a whole community out of mere suspicion.

4. A raft of lawsuits by Japanese-American victims in the 1970s and 1980s, although they narrowly failed in the courts, put pressure on Congress, which awarded the equivalent of $40,000 per person in reparations in 1988. This law was an admission of guilt and can now by cited in court by Muslim Americans.

Actually, if the Trump administration does anything about a registry, it will likely just reinstate the Bush administration program of requiring registration of certain categories of non-citizen immigrants from select countries. Of Bush’s 25 countries, 24 were Muslim-majority. Since everyone from the designated countries had to register, it was not discriminatory and affected some Christians. Only about 80,000 people were registered in this way. The program probably harmed US security since the government sometimes used the registration to deport people who, e.g., slightly over-stayed their visas. The knowledge of these practices appears to have made Muslim-Americans afraid to talk to the authorities for fear they would make themselves a target. So the community as a source for crucial intel was taken off the table.

This latter step could be taken, but registering Muslims in general, and especially citizens, almost certainly would not be allowed by the courts. Even the registration of immigrant non-citizens from select countries will have adverse effects on our security. The policy could also harm Americans traveling abroad for e.g. business, since often such policies are reciprocal and there could be a tit for tat.

But actually, Higbie’s suggestion is just completely morally wrong. Very few long-term Muslim residents or citizens of the US have been involved in terrorism, and their numbers are dwarfed by the violence of far right wing white people, whom Higbie is not proposing to register.