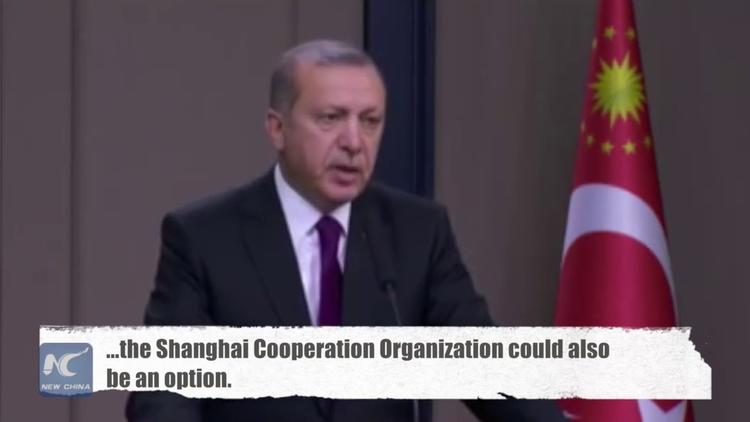 Turkish president Tayyip Erdogan is talking about joining the Shanghai Cooperation Council as a full member as a reaction to his frustrations with the European Union.

Erdogan’s massive crackdown on dissidents after the July 15 failed revolution has led to 110,000 people being fired from their jobs and some 32,000 being jailed. Some of Erdogan’s targets are members of the secretive cult, the Gulen movement. But many or perhaps most are secularists or other regime critics and had nothing to do with the coup.

In short, Erdogan has opportunistically taken advantage of the coup attempt to sideline both his secular and his religious critics.

Erdoganism is similar to Putinism, and just a 21st century version of authoritarian populism. You cow the press, curb social media, and jail or marginalize critics, and reinforce one ethnicity over others. Erdogan bears some responsibility for turning the conflict with the Kurds into a hot war.

The Shanghai Cooperation Council, formed in 1996, consists of Russia and China, as well as the Central Asian countries of Uzbekistan, Kyrgyzstan, Kazakhstan and Tajikistan.

Although Turkey has some commonalities with the SCO nations (three of them speak some form of Turkish) I think Erdogan is bluffing.

His main concern seems to be that the European Union is deeply critical of his dismantling of Turkey’s democracy. They are not simply going to wink at his behaving like a late 1960s Greek general.

In contrast, China has a policy of not intervening in other countries’ domestic affairs. Russia under Putin, in addition, is not exactly a bulwark of democratic freedoms.

But the whole proposition is weird since it ignores a key contradiction. Russia and China vetoed several UN Security Council votes on a no-fly zone for Syria, and Russia is giving air support to the regime of Bashar al-Assad, which Turkey would like to overthrow.

Moreover, Turkish trade with Europe dwarfs its commerce with the SCO by orders of magnitude. Annual Turkey-EU trade is on the order of 140 billion Euros.

The European Union is not only Turkey’s biggest trading partner, Turkey is also in NATO. Can you be in NATO and in the SCO at the same time? I doubt it. The US, France and the UK provide Turkey with highly sophisticated weaponry. Not only would it be difficult and expensive for Turkey to replace the American and EU hardware with Russian and Chinese arms, it is difficult to make a Russian tank talk to an American F-16. Countries have a tendency to do one-stop shopping for arms because of this integration problem.

I don’t think Turkey will attain membership in the EU if it goes on like this (the EU conceives of itself as a union of democracies). But there are advantages to being in the queue for the EU and Erdogan would have to think his nationalism really valuable to sacrifice billions for it.

So, I conclude that this Shanghai CO business is an idle threat on Erdogan’s part, perhaps a way to get the Europeans to be quiet about his human rights abuses.

New China TV: “Turkey president: Turkey not constrained to joining the EU…SCO could be an option”