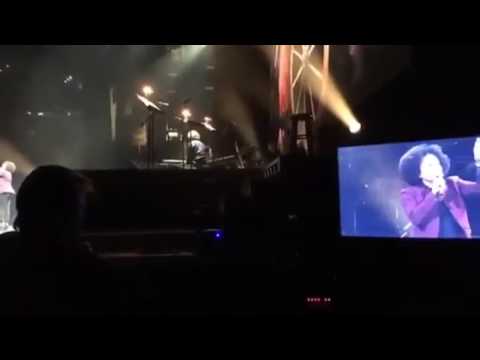 Building a wall of support against Trump’s wall of rhetoric is the way forward.

Wanda Sykes, a Black lesbian comedian, was booed because she dared to rant against the new U.S. president-elect just five minutes into her set. “I am certain this is not the first time we’ve elected a racist, sexist, homophobic president,” she said, “He’s just the first confirmed one.”

She quickly raised her middle finger at the booing audience and said, “Fuck you, motherfuckers.” Sykes was performing at the TD Garden in Boston just six days after a KKK-endorsed Trump was declared the president of the U.S.

Reflecting on what transpired onstage that night, Sykes later said, “I left the stage with my head held high and with my middle finger even higher.”

It is this rising choler, temper and momentum that might help vulnerable communities thrive and cope under a white supremacist presidency.

The day after Trump won the election, the Nation published an article urging its readers to, “Check on your people, and be ready to stand with them … For immigrants, for Muslims, and for people of color in general, the results of this election feel like imminent death."

And this is no exaggeration. If you look at the enormous rise in hate crimes against vulnerable communities in just a little over a week’s time, you’ll agree. The Southern Poverty Law Center has recorded over 700 hate crimes between Nov. 9 and Nov. 16 alone. There’s also been an uptick in the incidents of “hate group recruitment.”

Carolyn Torres, who is a high school history teacher in the Watts neighborhood of Los Angeles, felt utterly demotivated and deceived by Trump’s victory. She did not teach the day after Trump got elected. “At work, students who are predominantly from POC and Black communities were crying,” said Torres.

The chaos and the ambivalence engulfed everyone around. “The air was thick during the first few days at school. A lot of these students are worried that their parents will be deported.”

Trump’s talk about an immigrant and Muslim registry has enraged marginalized communities in the United States. Kansas Secretary of State Kris Kobach is an immigrant advisor to Trump and formerly worked for the Bush administration. Kobach said he hopes to resurrect the National Security Entry-Exit Registration System, a Bush-era program he designed for the Department of Justice shortly after Sept. 11, 2001, that included a database of immigrants from 25 countries, 24 of which had a majority Muslim population.

This program was indefinitely suspended by the Obama administration. As per the database, 83,000 Muslims were registered, 13,000 were forced into court proceedings and hundreds of immigrants were rounded up and deported.

But movements such as #Registermefirst, launched by ReThink Media, have popped up to defend those who will be monitored by Trump’s program. The rotten idea has been compared to the U.S.-imposed internment camps for Japanese-Americans during World War II.

There is also the “National Registry of White Males,” which seeks to register white people who have made "derogatory comments includ(ing) sexual and racial slurs, sexual harassment, stereotyped comments about a group of people, off-color jokes."

A host of microblogs have cropped up since the fateful night when Trump was elected. The sole purpose of these blogs is to create safe online spaces where vulnerable communities can find some solidarity, share their thoughts and ideas on how to move forward in the Trump era.

Why We Are Afraid chronicles hate incidents against individuals that are taking place across the U.S. From an image of a KKK flier found on the windshield of a car to a white kid who squeezed hot glue onto a Black kid’s arm, leading to third-degree burns — the blog is maintaining records detailing hate incidents.

ACLU’s campaign against Donald Trump, “See you in Court,” is requesting donations from the public “to provide the ongoing support we’ll need in the coming months”

Another “living document” was compiled and moderated by Kara Hurvitz, an attorney based out of Boston. Called Concrete Suggestions in Preparation for January 2017’s change in American government, the project invites people to suggest legal issues and rights they fear are under threat. The document has an exhaustive list of suggestions and general information designed to help folks “to proceed in this conservative climate.”

And for those who are still coping with waves of aftershock, there’s a crowdsourced “survival guide” called “Oh Crap What Now Survival Guide.” It offers resources in the areas of health, legal, and safety focusing on social, digital and economic security in this urgent milieu resulting from the “outcome of the recent U.S. election.”

It’s time to understand the rhetoric and re-examine the jargon that is floating around on the web sphere. There’s more than meets the eye when it comes to how and why a reality TV star will soon be the man residing in the White House.

As Jazmin Campos, an activist with Todo Poder al Pueblo Collective in Oxnard, California, put it, "Even before Trump, people were suffering. It’s not just racism. We are living under an economic system that is exploitative in many ways. Trump hasn’t brought this with him, the issues were already there." It was also the politics of absolutism that led to Trump’s win. The discontent wasn’t just fueled by racism – it was fueled by economic and class-based anxiety as well.

Bill Fletcher, a racial justice activist, wrote, "Too many of us on the left treat the right as a monolith. We spend little time trying to distinguish various right-wing currents, let alone disentangling the differences between neoliberalism and right-wing populism. And our failure to do so is hampering our efforts to fight back." Fletcher also traced back the rise of this "right-wing populism" to the Know-Nothing party, a prominent U.S. party in the late 1840’s, with inherent nativist and anti-immigrant sentiment.

According to a study conducted by sociologists from Tufts and Harvard, white people viewed reverse racism to be more of a problem than anti-Black racism. Seemingly, the support Trump garnered in heavily white areas was not merely based on racial egalitarianism but on "self-interest." White people clearly were dissatisfied with a Black president.

For Torres, one of the most difficult aspects of a Trump victory has been when the people from the affected communities try to downplay the after-effects, the potential damage Trump can wreck on the lives of minorities.

“It’s heartbreaking when people say ‘what’s done is done.’ Normalizing the white-nationalist fascist rhetoric and the whole conversation about ‘let’s give him a chance and get over it,’” said Torres. “(Because if we even listen to this rhetoric), the momentum could die and then all these cases will become merely isolated cases of brutality.”

She said that the way forward is to “keep organizing, build locally, so that we have stronger communities who are ready and can respond when need be.” Communities that will be best-prepared will be able to move with more urgency, creating a sense of alertness while benefiting from shared resources and networks.

A Trump presidency has sent a shockwave through the United States. Reading important seminal works by authors such as Ta-Nehisi Coates, Toni Morrison, or Junot Diaz could lend a new perspective on the issues that deeply impact other communities.

“We can’t counter this (Trump’s presidency) on an individual level. Big structural things need change,” said Torres. “People need to know that there are other people that are willing to stand for themselves.” Mere symbolic gestures such as wearing a safety pin just aren’t enough.

Real actions that can help affect change is what matters. “When people get assaulted on the streets and need help, they are not going to look for a safety pin,” she said.

Political action and education, petitions and awareness and monitoring of policy are what matters.

Campos said, “A lot of people who hadn’t contacted us before are coming forward to participate asking, ‘how can we help?’” For Campos, the fear has ignited “this energy of being ready, with even more urgency.” Campos said there’s a need to validate this anger.

She has undocumented family members and friends and the fear of deportations has certainly become one of their major concerns. Campos’ organization is now gearing toward even more active civil participation. “We are focusing on community resistance among undocumented and migrant populations.” Their advocacy and workshops also focus on "Know Your Rights" training, where members of the collective and pro-bono attorneys help provide education about the law and best practices in relation to law enforcement encounters and safeguarding immigrants’ rights.

Campos said what’s needed is “More participation in direct actions like protests, rallies, workshops, conferences to make sure that we have a presence in our own neighborhoods. We need immediate response teams in case of emergency situations like raids.”

Campos said the “President-elect has fast-forwarded all that we have to resist against. We have to do it now. The anger, the rage to not want to accept it is the best way to organize.” She also said that there’s a need for “mutual aid” responses to the police brutality and bigotry that might rise under Trump. “We can’t rely on police whenever there’s a problem.”

In an interview, Amy Goodman of Democracy Now asked, Ava DuVerney – director of "The 13th," a film that highlights the hypocrisy of the U.S. Constitution’s 13th Amendment – what gives her hope.

DuVerney, responded, “Oh gosh! The faces of Black people … because there’s Black joy amidst all the Black trauma. All the years of violence and oppression, subjugation and prejudice.All these years of not being able to live fully freely in this country as full citizens with all the rights and freedoms. There’s still joy there, there’s still survival there that still allows there to be light, and that is such a strength and that is such a beauty that whenever I see Black people gathered (in groups of) more than one, it gives me hope.”

Wanda Sykes Gets Booed For Calling Trump A Racist