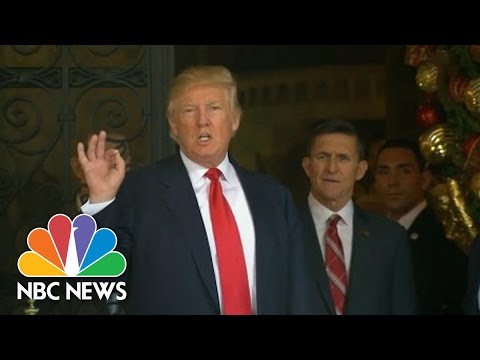 After the assassination of the Russian ambassador to Turkey by a member of the Ankara police force who appears to have gone over to some form of al-Qaeda-like radicalism, one person on the internet said that Turkey should never have let Muslims into its country.

This person did not realize that the vast majority of people who live in Turkey are of Muslim heritage, and have been for many centuries.

This “this is not The Onion” level of disbelief also has to attend Trump’s reaction to the assassination of the Russian ambassador to Turkey on Sunday. He said the incident, and the truck attack in Berlin on what he characterized as “Christians,” proved he was right in his position that Muslim immigrants should not be allowed to come to the US.

Trump, moments ago, asked about overseas attacks: "What's going on is terrible. In fact, we have intelligence here right now."

The problem is that assassin Mevlut Altintash was not an immigrant, to anywhere. He was a natural born Turk, born and raised in his native country. He is also part of a very tiny fringe of radical Muslim Turks (large numbers of Turks are secularists, while most others tend toward a moderate Islam).

Both in Ankara and in Berlin, far right radicals were attempting to troll various publics. They want to sour relations between Turkey and Russia. They want to provoke Germans of Christian heritage to attack Germans of Muslim heritage. When German Muslims are accepted in German society, radicalism cannot flourish. Hence, it is suspected that a Tunisian terrorist drove the truck into the German crowd.

The German far right is scathingly criticizing Chancellor Angela Merkel and urging attacks on German Muslims (5.8 percent of the German population). In other words they are allowing themselves to be trolled by Muslim radicals. Likewise, so is Trump swallowing the Daesh (ISIS, ISIL) line.

Likewise, for someone to suggest that only immigrants have committed violence in Germany is obscene. Far more violence is committed by the German far right (and has been for a century) than was ever carried out by the small Muslim community in Germany. The same is true of the United States, where Neonazis, biker gangs, and other manifestations of the far right have deliberately ratcheted up tensions between Christians and Muslims.

Gandhi said that an eye for an eye makes the whole world blind. If the German and American publics allow the radical trolls to win, that is where the whole world is going.