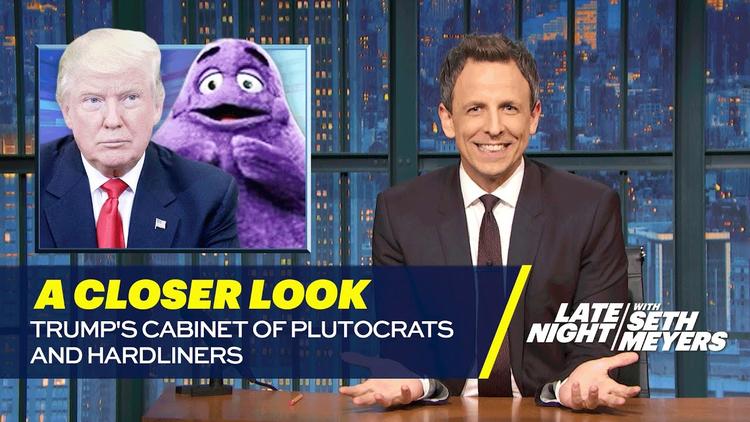 Donald Trump and the business kingpins populating his inner circle want to slice the tax bill of America’s top 0.1 percent.

In a typical corporate board of directors meeting, what do CEOs see when they look out across their richly lacquered boardroom tables? Lots of other CEOs.

That’s no accident. CEOs today purposely pack their corporate boards with their pals, who often turn out to be current or former chiefs at other corporations. Everybody who’s anybody just feels more comfortable that way

For secretary of state, Trump has tapped Exxon Mobil chief executive Rex Tillerson. At Treasury, he’s installing former Goldman Sachs executive Steven Mnuchin. Trump’s pick for commerce, billionaire Wilbur Ross, runs his own investment firm and sits on five other corporate boards.
President-elect Donald Trump, a big-time business chief himself, certainly seems to want to feel comfortable, too. No other President-elect has ever packed his cabinet with more business bigwigs.

For transportation secretary, the President-elect has chosen Elaine Chao, the scion of a shipping magnate fortune who pulled down over $1 million last year sitting on four corporate boards. Trump’s choice for labor secretary, fast-foods CEO Andrew Puzder, has made his own fortune keeping wages low at the Hardee’s and Carl’s Jr. chains.

Betsy DeVos, the Trump education secretary-designate, has never stepped foot in a public school as a student, educator, or parent. But she does hail from the billionaire family that runs the money-making machine that goes by the name of Amway.

At the Small Business Administration, Trump is situating Linda McMahon, the billionaire who helps runs a sports entertainment empire. And the chair of Trump’s National Economic Council will be Gary Cohn, the president of Goldman Sachs.

Donald Trump, to be sure, won’t go down in history as the first president to ever plop business chiefs in the federal government’s loftiest positions. Previous presidential business picks have even generated some intense controversy.

In 1953, for instance, President Dwight Eisenhower put forward as his secretary of defense the president of America’s most powerful company, Charlie Wilson of General Motors.

Wilson told his Senate inquisitors that he didn’t think he would face a conflict of interest between his corporate and government service because, he explained, “for years I thought what was good for our country was good for General Motors, and vice versa.”

“Our contribution to the nation” at GM, Wilson added, “is quite considerable.”

And Wilson did have a point. In postwar America, big companies like GM did make a contribution to the nation. They didn’t just extract wealth. They did some serious sharing. Years of labor militance had convinced business leaders like Wilson that corporations had to bargain reasonably with their workers.

In 1950, Wilson’s General Motors and the United Auto Workers had signed a landmark contract that came to be known as the “Treaty of Detroit,” and the basics of that treaty — productivity-based wage hikes above and beyond inflation, significant pension and other fringe benefits — would soon spread throughout America’s unionized heavy industries.

And Charlie Wilson shared personally, too, via the steeply progressive tax rates then in effect. In 1950, Wilson earned $586,100 from his GM compensation and personal investments. He paid 73 percent of that — $430,350 — in income taxes.

Just ponder those numbers for a moment. In the middle of the 20th century, the top exec at the top corporation in the United States had an after-tax income of $155,750, the equivalent, after taking inflation into account, of a mere $1.56 million today.

Now we don’t know exactly how much our contemporary corporate chiefs are paying in federal taxes. We do know, from an IRS report released earlier this year, that Americans in their income neighborhood — the top 0.01 percent — paid federal income taxes at a 26 percent effective rate in 2013.

For corporate chiefs, America has changed a good bit since Charlie’s time. And now Donald Trump and the business kingpins he has populating his inner circle want to change it a good bit more. The latest tax plan that Trump has advanced would on average, the Tax Policy Center calculates, slice the tax bill of America’s top 0.1 percent households by over $1 million each in 2017.

Sam Pizzigati is an associate fellow at the Institute for Policy Studies.