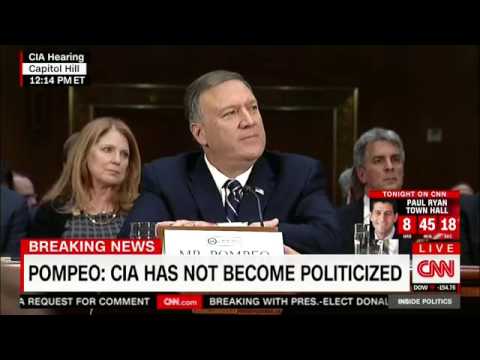 This week, we’ve seen a parade of Donald J. Trump’s far-right cabinet appointees attempting to tone themselves down (with help from pliant GOP senators) for the general public with half-truths and evasions. They were not challenged on some key issues. Rex Tillerson, CEO of ExxonMobil, didn’t admit his company’s complicity in fooling the public about the danger of climate change, e.g. In particular, Mike Pompeo for CIA got off amazingly lightly.

So here’s the problem. Trump is putting someone in charge of the Company who doesn’t trust the facts. When his exhaustive persecution of Hillary Clinton over the Benghazi attack of 2012 yielded conclusive findings that exonerated her, he wrote his own dissenting report. His report was a dark fantasy; he should leave that to horror writer Stephen King.

Pompeo was behind an attempt to undermine the CIA in Iraq by claiming that the success of the fight against Daesh (ISIS, ISIL) there had been exaggerated by the intelligence community. In fact, Daesh has been steadily rolled up and is now besieged in virtually its last Iraqi territorial bastion, of West Mosul.

Pompeo, of Wichita Kansas, who is in the back pocket of the dirty-carbon Koch brothers, is a major climate change denialist. Climate change is one of the big security challenges facing the US. How can a denialist deal with the refugee flows it will create, the damage to infrstructure it will do, the terrorism it might provoke?

Pompeo was asked by Sen. Diane Feinstein (D-CA) if he would order the waterboarding of suspects by the Central Intelligence Agency if he were confirmed to lead it.

“Absolutely not,” he replied. “I will always comply with the law.”

Then he added, “I can’t imagine I would be asked by the president-elect or then president.”

So just close your eyes, Mike, and listen to Trump from Feb. 2015: “Don’t tell me it doesn’t work — torture works. Half these guys say ‘Torture doesn’t work’. Believe me, it works.”

Although Pompeo said he had voted for a law that banned waterboarding, what he actually voted for was banning torture; the trick is that he doesn’t define waterboarding as torture. In fact he has continued to advocate it and has slammed the Obama administration for not using it, so I think he wasn’t being entirely forthcoming here.

He wrote at his website in 2014, ““President Obama has continually refused to take the war on radical Islamic terrorism seriously—from ending our interrogation program in 2009 to trying to close Guantanamo Bay . . .”

What exactly does he mean by “ending our interrogation program”? By the way, Obama killed Osama Bin Laden; Pompeo didn’t.

Pompeo also caused a stir by arguing that Muslims must go around denouncing Muslim terrorism all the time or else they are “potentially complicit in these acts, and more importantly still, in those that may well follow.”

I can’t say how monstrous this is. Did Pompeo ever once stand up in Congress and denounce the terrorist actions of white supremacists, which are far more frequent and damaging than those of Muslims? And why is he comfortable joining an administration where Neofascist Steve Bannon is White House chief strategist? Maybe Pompeo is complicit?

Ironically, three white supremacists from Pompeo’s part of the country were busted in a plot to kill local Somali Muslims and to kill white officials and clergymen whom they saw as soft on Muslims. Some of Pompeo’s own political colleagues were in danger from these terrorists. So again, I ask. Did Pompeo denounce this group of white terrorists? If not, did he approve of their plans?

The CIA is in the business of having field officers recruit and run agents, including in the Muslim world. Will a Pompeo CIA really be good at gaining the trust of Muslims in the Middle East, if he thinks they are all terrorists?

Then there is Pompeo’s determination to go to war against Iran:

I look forward to rolling back this disastrous deal with the world’s largest state sponsor of terrorism. https://t.co/bifC97jWpY

So you have to wonder whether someone who unfairly bashed the CIA for its successful work against Daesh in Iraq, who has alienated all America’s Muslim allies with his extremist Islamophobia, who denies the challenge of a rapidly changing climate, who lives in a fantasy world in which Hillary Clinton had any operational role at Benghazi, who favors waterboarding, and who doesn’t seem to have heard the speeches demanding torture given by his own prospective boss– and who has consistently failed to denounce terrorism by white supremacists– you have to wonder whether he can be successful at the helm of the CIA.