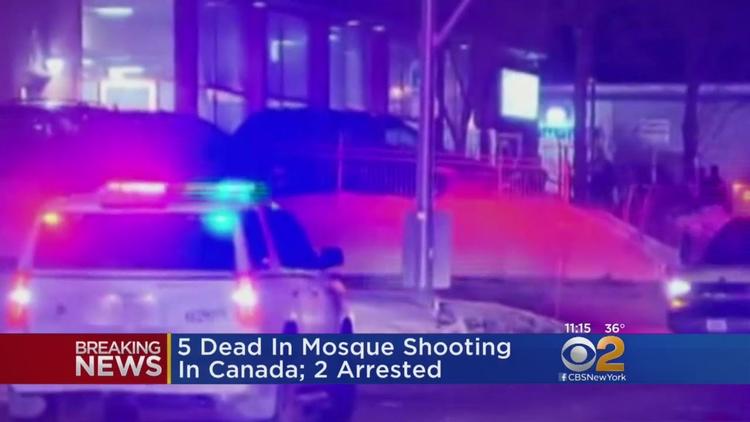 Incidents of Islamophobia have increased in Quebec in recent years amid a political debate over banning the niqab.

At least two people have been arrested in the aftermath of the deadly shooting of a Quebec City mosque that has left five people dead in the eastern Canadian province, according to reports.

Many others were left with injuries and have been taken to the University Hospital of Quebec. Others are in hospitals throughout the city, hospital spokesman Richard Fournier told CNN.

The attack occurred around 8 p.m., during evening prayers at the Islamic Cultural Center of Quebec City, also called the Grande Mosque de Québec, on Sainte-Foy Street.

A witness told Reuters that three armed men had opened fire on about 40 people inside the mosque.

According to news agency La Presse, one of the suspects, who was later caught by police on a bridge, was carrying an AK-47 assault rifle. Local newspaper Le Soleil said police told them a third suspect could still be on the run.

At least 20 emergency vehicles arrived at the scene and police quickly set up a security perimeter. Quebec City Police later confirmed that the area had been secured.

“The site is secure and the occupants (of the mosque) were evacuated. The investigation continues,” the department tweeted.

“Why is this happening here? This is barbaric,” said the mosque’s president, Mohamed Yangui.

Yangui, who was not inside the mosque when the shooting occurred, said he got frantic calls from people at evening prayers. He did not know how many were injured, saying they had been taken to different hospitals across Quebec City.

Incidents of Islamophobia have increased in Quebec in recent years amid a political debate over banning the niqab. In 2013, police investigated after a mosque in the Saguenay region of Quebec was splattered with what was believed to be pig’s blood. And in the neighboring province of Ontario, a mosque was set on fire in 2015. In June 2016, a pig’s head was left on the doorstep of the cultural center once again, with an Islamophobic letter being subsequently distributed in the vicinity.

According to Yangui, however, the mosque had stopped receiving threats after that.

“We have a very good relationship with the neighbors, with the community,” he told the Edmonton Journal. “There’s mutual respect – and now today we have this dramatic event.”

Canadian Prime Minister Justin Trudeau also took to social media, tweeting: “Tonight, Canadians grieve for those killed in a cowardly attack on a mosque in Quebec City. My thoughts are with victims & their families,” in both French and English.