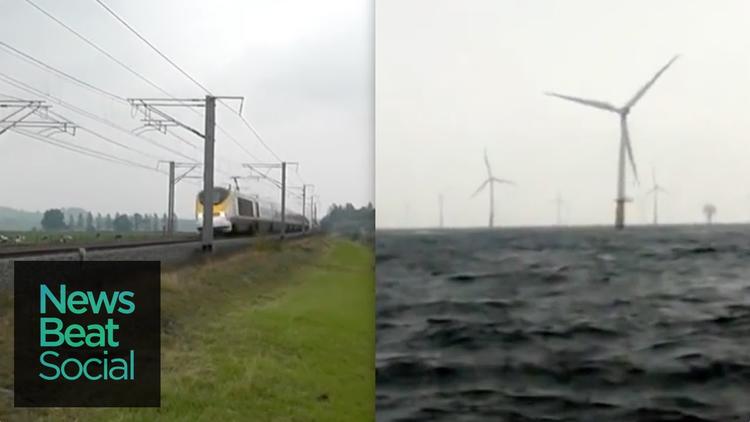 Although Donald Trump has complained about America’s failing airports, bridges and roads and expressed admiration for those of Dubai, his opposition to green energy will deprive Americans of efficient, clean new vehicles and buildings that would have saved them billions of dollars, created hundreds of thousands of jobs, and resulted in trillions of dollars of profits for American companies. Who will get those benefits instead? China and the European Union. Even Dubai, part of the United Arab Emirates, is going green, with the UAE Masdar green energy company investing in wind projects in e.g. Scotland. What will Americans get? Lung disease, mercury poisoning, high energy prices and joblessness. (There are already 100,000 wind energy-related jobs in the US; there can be more, or less, depending on Trump’s policies).

The future is here, with regard to green energy. The ridership for electric trains in the Netherlands is over two hundred million a year, about half of all train ridership in this country of 17 million. Those electric trains are now 100% fueled by wind power. This goal had been announced only two years ago and the achievement was originally scheduled for 2018. But new wind farms have opened in Holland and Finland that made it possible to get there a year early. Once the wind turbines have paid for themselves, the energy they generate is virtually free, so the Dutch train system will avoid the cost of expensive and dirty petroleum forever after. The Netherlands is also thereby reducing its carbon emissions, reducing the damage to the environment from global warming and sea level rise. (The Dutch are especially vulnerable to sea level rise).

Donald Trump campaigned against wind turbines in Scotland because of his golf course. Too bad for him, he lost, and now is losing big time. For four days in a row this Christmas season, wind turbines generated more electricity in Scotland than it needed. In the month of December, wind provided about half of Scotland’s electricity. Scotland had had a goal of 50% of its electricity from renewables of all sorts by the end of 2015, but got to 60%. By now, about 3/5s of electricity consumption is met by renewables. Scottish green activists are now pressing to get household and business heating off of natural gas and onto the electric grid, so that expanding renewables can replace hydrocarbons across the board. It just got in 70 new electric trains, which can be run off renewables. But note that these trains were bought from Japan, not from the United States. That is the sort of opportunity cost American workers will increasingly bear under Trump. Scotland’s last coal plant closed last May, in a death knell for that industry. Scotland is not resting on its laurels. It has innovative projects for offshore floating wind turbines and for current-driven undersea tidal turbines (Scotland has an unusual underwater opportunity here; dependably fast currents aren’t all that common).

Wind power is up to 9% of India’s electricity production, but that is only the beginning. The country of 1.3 billion with a gross domestic product of $2.2 trillion (roughly the same as France) is a coming world power and has big plans for wind power. By the end of 2017 India is expected to have added another 4,300 MW of wind power, a 30% increase. A 30% increase in 18 months! Imagine the more distant future. If the industry falters in the United States, will it be able to provide the turbines that will power much of the world?

Ethiopia is planning to become the wind powerhouse of Africa. As a rapidly growing economy in a country of 94 million citizens, where 80% of the population does not have electricity, it is typical of the dilemmas facing the global South. It has enormous energy needs, necessary to the well-being of its population. But its leaders want to avoid becoming beholden to dirty hydrocarbons as they electrify and grow the country. As a Christian majority country in an area where Islam is prominent, they may worry about Saudi influence. In any case, Addis Abababa is going green. It built Africa’s largest wind farm in 2013 and gets 7.5% of its electricity from wind. But now it plans to sink $3 billion into building 5 more wind farms that will generate 5200 megawatts. The country’s total electricity output at the end of 2015 was only about 4,000 megawatts. It is going for a total output of 17,000 megawatts by 2020.