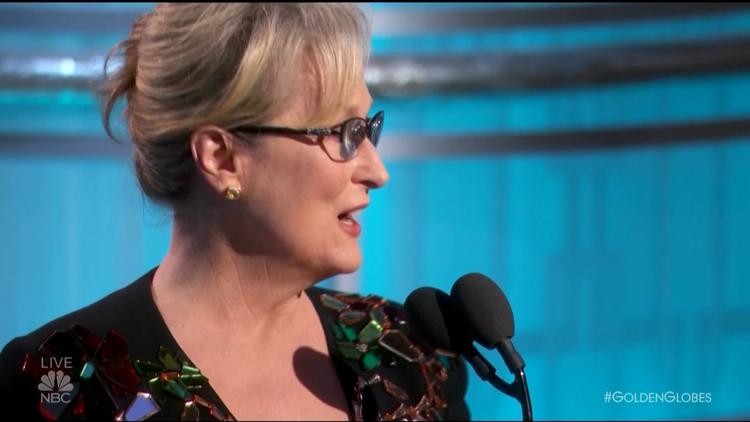 Occasionally entertainment and politics intersect, often hitting a false note. You never want your screenplay to be, as they say in Hollywood, “on the nose.” You have to step sideways away from ordinary news and address some dimension of the human condition to make art.

But in moments of national crisis, stars feel a need to speak out. Nick Gass has reviewed some of the major such incidents at the Academy Awards. Jane Fonda used ther moment on the stage at the Academy Awards in the 1970s to denounce the Vietnam War. Marlon Brando declined to appear and had a Native American activist accept for him, making a statement about Indian rights.

Robin Corey tells the story of how in 1978 Vanessa Redgrave was picketed by the Jewish Defense League because of her support for Palestinian rights, and when she won her category anyway, she said, “I think you should be very proud that in the last few weeks you’ve stood firm and you have refused to be intimidated by the threats of a small bunch of Zionist hoodlums whose behavior is an insult to the stature of Jews all over the world and to their great and heroic record of struggle against fascism and oppression.”

So we now have another such moment, as Meryl Streep tearfully addressed the stars assembled at the Golden Globes about her anxieties and distress at the advent of the Trump era in the United States.

She pointed out, as Hugh Laurie already had, that those assembled at the Golden Globes award ceremony (put on by the Hollywood Foreign Press Association) were Hollywood, foreigners, and the press, the very sort of people who have been vilified for the past 18 months by Donald J. Trump. (Laurie had wondered if last night’s ceremony would be the last, as all the foreigners were kicked out of the country).

She pointed out the diversity of the origins of the actors in the room, saying that Amy McAdams, Natalie Portman, Ruth Negga, Ryan Gosling and Dev Patel were born abroad: “Where are their birth certificates?” she asked. The essence of the acting art, she affirmed, is to get inside a character who is foreign to us and make us feel what they feel. “And there were many, many, many powerful performances this year that did exactly that, breathtaking, passionate work.” She was making two points against the xenophobia, the irrational hatred of foreigners, at the center of the Trump campaign and at the center of his Neonazi fringe, such as the Breitbart thugs. One is that key American industries, including the entertainment industry, often attain their excellence through openness to talent from abroad. The second is a far more subtle and powerful point, which is that no human experience is really foreign to us as human beings if only we can find the tools to understand it, emotionally and intellectually. She was standing up for her craft, acting, as xenophilic, as involving a love of the foreign, insofar as the falling away of strangeness is the goal of great acting.

Her most powerful intervention, however, referred to Donald J. Trump’s mocking of New York Times reporter Serge Kovaleski, who is challenged by a congenital joint condition. 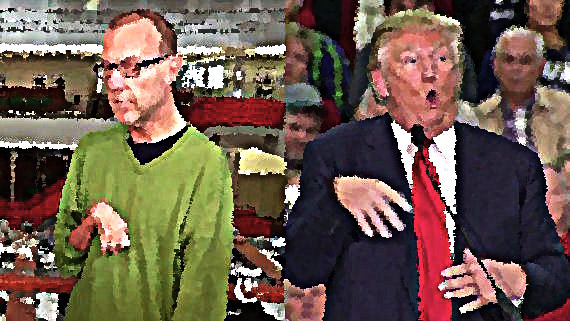 By the way, the mocking was provoked by Kovaleski’s having stood up to Trump over his false and monstrous claim that large crowds of Muslim-Americans celebrated the September 11 attacks in New Jersey. She called Trump’s antics a “performance” but lamented that it was in “real life.” She thus drew attention to the similarity of the political speech, which spins a narrative and often involves some mugging for the camera or even doing impressions of people, to the actor’s performance. Her complaint is that when Trump bully Kovaleski in public, he gave permission to all Americans to be mean to the weak, to become a nation of goons.

Streep is in tears because a Fascist is about to take the helm of our country. And her apprehension over how the tone set by the White House could coarsen the fabric of everyday life is well-placed. Her call on the press to confront these tendencies may be a bit forlorn. The television media, at least, appear to view Trump as a cash cow because he attracts eyeballs, which allows them to earn more from advertising.

But I think the situation is even more dire than just a president who encourages bullying by example. I think there is a danger that Neo-Nazis and Klansmen and other such gangs may start beating up Jews, and Muslims and Latinos and African-Americans. I think there is a danger that Attorney General Jeff Sessions will encourage this racialized violence, and that local police will be encouraged to wink at it. I fear a tear in the fabric of the rule of law. Fascism doesn’t begin with a big military machine, it begins with gangs of brutes.

Ms. Streep left us with the most wonderful advice, relayed from the late Carrie Fisher: “the dear departed Princess Leia, said to me once, take your broken heart, make it into art.”

Thank you, Hollywood foreign press. Just to pick up on what Hugh Laurie said. You and all of us in this room, really, belong to the most vilified segments in American society right now. Think about it. Hollywood, foreigners, and the press. But who are we? And, you know, what is Hollywood anyway? It’s just a bunch of people from other places.

I was born and raised and created in the public schools of New Jersey. Viola [Davis] was born in a sharecropper’s cabin in South Carolina, and grew up in Central Falls, Long Island. Sarah Paulson was raised by a single mom in Brooklyn. Sarah Jessica Parker was one of seven or eight kids from Ohio. Amy Adams was born in Italy. Natalie Portman was born in Jerusalem. Where are their birth certificates? And the beautiful Ruth Negga was born in Ethiopia, raised in — no, in Ireland, I do believe. And she’s here nominated for playing a small town girl from Virginia. Ryan Gosling, like all the nicest people, is Canadian. And Dev Patel was born in Kenya, raised in London, is here for playing an Indian raised in Tasmania.

Hollywood is crawling with outsiders and foreigners. If you kick ’em all out, you’ll have nothing to watch but football and mixed martial arts, which are not the arts. They gave me three seconds to say this. An actor’s only job is to enter the lives of people who are different from us and let you feel what that feels like. And there were many, many, many powerful performances this year that did exactly that, breathtaking, passionate work.

There was one performance this year that stunned me. It sank its hooks in my heart. Not because it was good. There was nothing good about it. But it was effective and it did its job. It made its intended audience laugh and show their teeth. It was that moment when the person asking to sit in the most respected seat in our country imitated a disabled reporter, someone he outranked in privilege, power, and the capacity to fight back. It kind of broke my heart when I saw it. I still can’t get it out of my head because it wasn’t in a movie. It was real life.

And this instinct to humiliate, when it’s modeled by someone in the public platform, by someone powerful, it filters down into everybody’s life, because it kind of gives permission for other people to do the same thing. Disrespect invites disrespect. Violence incites violence. When the powerful use their position to bully others, we all lose.

This brings me to the press. We need the principled press to hold power to account, to call them on the carpet for every outrage.That’s why our founders enshrined the press and its freedoms in our constitution. So I only ask the famously well-heeled Hollywood Foreign Press and all of us in our community to join me in supporting the committee to protect journalists. Because we’re going to need them going forward. And they’ll need us to safeguard the truth.

One more thing. Once when I was standing around on the set one day whining about something, we were going to work through supper, or the long hours or whatever, Tommy Lee Jones said to me, isn’t it such a privilege, Meryl, just to be an actor. Yeah, it is. And we have to remind each other of the privilege and the responsibility of the act of empathy. We should all be very proud of the work Hollywood honors here tonight.

As my friend, the dear departed Princess Leia, said to me once, take your broken heart, make it into art. Thank you.”