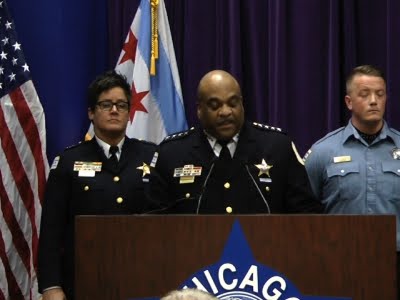 The meaning and enforcement of the Illinois hate-crimes statute seems destined for intense scrutiny with the arrest this week of four young black adults in Chicago in connection with the assault of a mentally disabled white man. The arrests by the Chicago Police Department resulted in part from what appeared to a livestreamed video of the disabled man being abused while bound and gagged. The recording captures one or more of the attackers making references to Donald Trump and white people.

A person commits hate crime when, by reason of the actual or perceived race, color, creed, religion, ancestry, gender, sexual orientation, physical or mental disability, or national origin of another individual or group of individuals, regardless of the existence of any other motivating factor or factors, he commits assault, battery, aggravated assault, misdemeanor theft, criminal trespass to residence, misdemeanor criminal damage to property, criminal trespass to vehicle, criminal trespass to real property, mob action, disorderly conduct, harassment by telephone, or harassment through electronic communications.

On Wednesday, Commander Kevin Duffin said the department was weighing whether to bring hate-crime charges against the suspects, saying it was not yet clear whether the attack was motivated by bias, according to The Washington Post.

“They’re young adults. And they make stupid decisions,” Duffin was quoted saying in the Post account. “That certainly will be part of whether or not we seek a hate crime to determine whether this is sincere or just stupid ranting and raving.”

On Thursday, however, CNN reported that formal hate-crime charges had indeed been filed. The arrests, as well as the police’s inquiry into the circumstances of the alleged attack, set off a perhaps not surprising firestorm on social media. The police were blasted for their failure to immediately charge the accused with hate crimes. The media were criticized for supposedly failing to adequately cover the incident.

The issue of hate crimes being committed against white people has flared occasionally over the years, and last year the website Broadly explored it in a post. It noted that a black Wisconsin teen’s conviction for assaulting a 14-year-old white boy under a hate-crimes statute had ultimately been upheld by the U.S. Supreme Court, and endorsed by the American Civil Liberties Union. The black teen had allegedly said “Do you feel all hyped up to move on some white people” after watching the movie “Mississippi Burning.”

James Jacobs, a professor of constitutional law at New York University and the courts director for the Center for Research in Crime and Justice, told Broadly, “There’s nothing unusual about applying hate crime laws to black defendants who harbor racist motivations against their victims.”

ProPublica reported late last year on recent hate crimes in New York City. According to data kept by the New York Police Department, there had been 380 hate crimes reported in 2016. Crimes against Muslims were up 50 percent from the same time last year. Crimes involving sexual orientation were also up.

But whites had been victims, too — the source of 16 reported crimes, nearly double the number of the year prior and most involving acts of violence.

The subject of hate crimes — how they are defined, how they are enforced, how they are reported by the media — has only intensified since the presidential election. Many critics of Trump’s campaign warned that his racially inflammatory policy positions and rhetoric would inspire violence against minorities and immigrants. Trump, for his part, has said that was not his intent. But his supporters have occasionally seized on reports of hate crimes, questioning their prevalence and veracity. The false report made by a Muslim girl in New York City was one such example.

Hate-crime data is poorly collected across the country, something ProPublica hopes to help remedy in 2017 with a yearlong project aimed at documenting and verifying bias incidents. The FBI counts between 5,000 and 10,000 hate crimes annually, though surveys by the federal Bureau of Justice indicate that there may be as many as 250,000. While the FBI’s data is incomplete, anti-white crimes make up about 20 percent of recorded hate crimes annually.

Brian Levin, the director of the Center for the Study of Hate and Extremism at California State University, said that while anti-white hate crimes make up a disproportionately small number of hate crimes given the white population, they are still given too little focus. “[Anti-white crime] exists, and when it happens it does not get the same kind of moral outrage that it should,” he said. But Levin said this crime should not raise questions about “one group being bad and another group being good,” but should push society to face a larger problem of coarseness throughout the country.

“The more that Americans feel unmoored from the institutions and creed that holds us together, the more often this kind of crap is going to happen on all sides of the spectrum,” he said, adding that minority groups that have traditionally been targeted will also act out because of this in ways that shouldn’t be ignored. “The idea that a group that has faced discrimination — African Americans, Jews — is somehow inoculated against having the effects of an increasingly coarse society affect their members is an illusion.”

The Southern Poverty Law Center, an advocacy organization that has long monitored hate crimes and bias incidents, has long recorded attacks against whites, and has pledged to do so going forward, including those crimes against whites possibly inspired by Trump’s victory. So far the SPLC has recorded 23 anti-Trump incidents, though it acknowledges this may be an undercount given who is most likely to report incidents of bias to the SPLC.

“The anti-white and anti-Trump remarks came one after the other,” Cohen said of the recording. “I take it as a synonym for anti-white rhetoric in their minds.”

The authorities, with the filing of charges Thursday, appeared for the moment to agree.