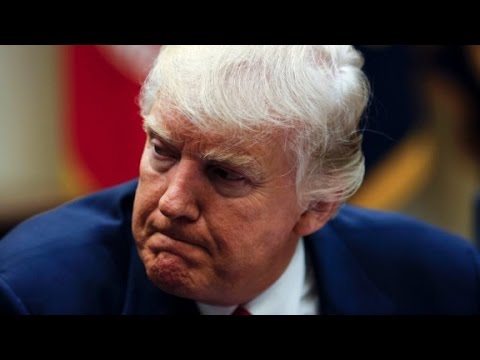 Trump did an interview with “Fox and Friends” for this morning in which he alleged that former president Barack Obama is behind the leaks that have bedeviled Trump’s White House.

The Fox agent provocateur asked Trump a leading question as to whether Obama is also behind the angry crowds of constituents who have attended some Republican town halls on issues like repeal of the Affordable Care Act.

Trump replied, “No, I think he is behind it. I also think it’s just politics. That’s just the way it is. You never know what’s exactly happening behind the scenes … I think that President Obama’s behind it because his people are certainly behind it.”

Last we saw President Obama, he was hang gliding in the Caribbean with obvious delight at getting his personal freedom back after eight thankless years in office, during which white people prevented him from doing virtually any of the good deeds for them that he had intended. Trump’s paranoid remarks would raise further questions about his sanity if a) they weren’t obviously planted by Rupert Murdoch’s mind control techniques and b) if any further questions about his sanity were necessary.

But here are the actual ways that Obama is, in a way, behind Trump’s troubles:

1. Obama is famously calm, collected, rational and deliberative. The unhinged and frenetic people who replaced him have freaked out the White House staffers who stayed on into the new administration, and impelled them to let the country know what is going on. Trump’s Rasputin and alt-NeoNazi Steve Bannon has so much of a temper on him that he’s been accused of repeated domestic abuse, and even he admits he “runs a little hot” (is he an old boiler or something?). So no one can be sure of its validity, but a White House leak feed tweeted this on Monday:

Bannon is the scariest person here. He's broken so much White House stuff by throwing it in anger. Plates, phones, chairs, etc.

Clearly it was the unrealistic expectations raised by Obama’s character that have caused this panic and the spate of leaks.

2. People at the town halls are afraid of losing their health insurance. Obama had minded that when she was ill, his mother’s disability insurance denied her claim because, the company said, her cancer was a pre-existing condition. So the Affordable Care Act forced insurance companies to provide coverage even for preexisting conditions. Republican legislators in the back pocket of the 1% want to abolish that provision, and therefore their town halls are full of angry Republicans who have decided that they rather like the ACA. This outrage is obviously Obama’s fault for having coddled the sick in the first place.

3. Obama was extremely careful about deploying military personnel in battlefront warfare. His critics complain about the drone strikes and bombing runs he launched. Whether they are right or not, the point for Obama was that these tactics were a means to avoid putting US soldiers in harm’s way. Two weeks into his presidency, Trump appears casually to have launched a commando raid on a facility of al-Qaeda in the Arabian Peninsula (AQAP) in southern Yemen. Some 30 civilians were killed in the raid, including 9 children, as well as a US Navy Seal. The Seal’s father is not satisfied that the raid was properly planned (Obama had ordered a study of the possibility but likely would not have signed off on such an operation). He refused to meet Trump and wants an investigation to see if the sacrifice of his son’s life was warranted. So that Obama did not typically shoot from the hip on military operations has also spoiled things for his successor.

4. There is no evidence that Obama’s National Security Adviser Susan Rice ever once called the Russian Embassy to reassure Moscow’s diplomats that sanctions placed on Russian officials over the unilateral annexation of Crimea from the Ukraine would be lifted. Nor did Rice take $40,000 to speak in Moscow at a commemoration of a Russian-government-backed television channel. So Rice’s absence of sketchy relations with the Russian Federation, in contrast to those of disgraced former Trump National Security Adviser Mike Flynn, clearly set a standard of behavior that impressed US security personnel and caused some of them to leak Flynn’s improper actions.

5. There are all kinds of people on staff at the White House, and some of them are disturbed at the white supremacist tone set by Trump, Bannon, Miller and others. One young Muslim-American woman says she only lasted 8 days in a newly hostile work environment. By treating people of all races and creeds decently, Obama without a doubt sowed dissension in the ranks of government employees who, after Trump’s election, discovered that he wanted to fire and/or deport them.

So yes, Donald, it is Obama’s fault. Just not in the way your warped mind imagines.