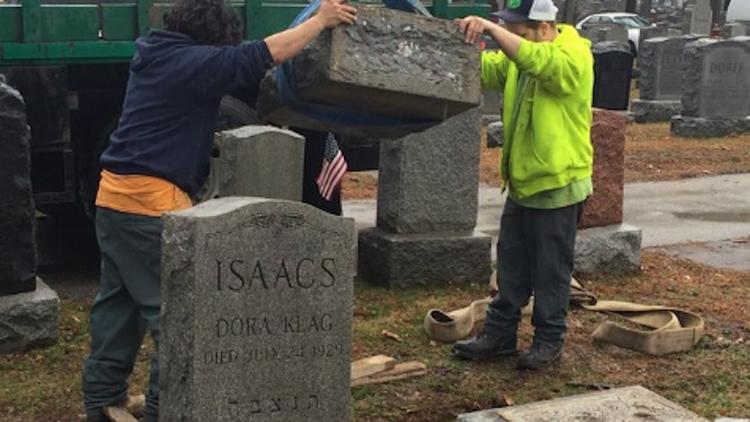 When it comes to death, my family honors all of the Ashkenazi Jewish traditions: We name our children after dead relatives, we sit shiva for a week, we gather around trays of fruit and lox and cream cheese, we cover the mirrors, we say the Kaddish prayer, we each toss three shovelfuls of dirt into the grave, and we wait a year to put a stone on top of it. When I got my driver’s license at 16, my mom asked me not to sign the organ donor card because Jews are supposed to be laid to rest in one piece. When I turned 18 and signed it anyway, I couldn’t stop imagining her face when she found out after I’d died in a car accident.

But traditions don’t protect you from death, or the life of anxiety in preparation for it. When I told my grandmother — her mother called her Malka, her sisters called her Mollie — that I had an opportunity to teach English abroad, I knew what to expect in response: “That’s nice, baby, but why don’t you find a teaching job around here where it’s safe?” That, and a $20 bill she couldn’t necessarily afford to give.

But when I added, “I’m going to a place in Belarus called Minsk; it’s a big city,” her reply took me by surprise. “Minsk!” she exclaimed. “That’s where my mother was from! I guess you could go. Maybe you’ll see where they lived?”

I did go. I didn’t see where they lived because that place does not exist anymore, thanks to World War II and the Soviets. To identify the symbols of Judaism left in a city that was about 37 percent Jewish in 1941, you have to squint at the stone facades of buildings and say, “Yes, I think that might be a Hebrew character.” You have to stare hard, and wonder, “Hmm, is that Yiddish?”

There are statues and plaques here and there. But look as one might, there are few relics of Jewish death. When you visit Khatyn, a memorial to the victims of “the Great War,” you learn about the deaths of hundreds of thousands of civilians, but little to nothing about what religion they practiced. Nor are there signs marking entire villages of Belarussians, Jews and non-Jews, that became unmarked mass graves. When I would ask my students and co-workers and friends, “What happened to the Jews here?” all most of them would say was, “They left.”

Here, of course, we know why they “left.” My relatives who stayed in Eastern Europe died. Those who moved to America lived. Every single one of my great-grandparents was a first- or second-generation Eastern European immigrant to St. Louis. If you’ve been following the news this week, you probably know where this story is going: Almost all of my immigrant ancestors are buried in the Chesed Shel Emeth cemetery, where nearly 200 graves were vandalized this past weekend.

I’ve been to only one funeral at Chesed Shel Emeth, which is in University City, about 15 minutes from where I grew up. I certainly wasn’t there when they buried my grandmother’s mother, Alice, the immigrant from Minsk, more than 40 years ago. Her tombstone wasn’t among the ones vandalized. But I know the idea that it might have been desecrated — that it is even a possibility — is on Grandma Mollie’s mind today, and on my mother’s as well. I know because for the last several days all we’ve been talking about are relatives like “little Grandma Alice,” who never grew to 5 feet, who cooked elaborate noodle kugels, whose husband died young, who never really learned to drive or speak English and who was scared of strangers unless her family was around.

I’m privileged to have grown up in St. Louis, a place where my grandparents wanted me to stay because it felt “safe” to them — a place they’d made their way to with the help of documents that we know weren’t entirely accurate or complete, and they became citizens anyway. So when a news link about my family’s Jewish cemetery popped up in the group chat for a reporting project on hate crimes that I’m involved in at ProPublica, I wasn’t prepared. Nor was I prepared when I called home and my mom told me that she was going to exchange cash for gold in case “things get worse” and that my dad — who has never considered shooting anything in his life — had wondered out loud about getting a gun.

I wanted to say, “You’re overreacting.” But I can’t, really, in part because it’s so hard to gauge the threat. Data on hate crimes — against Jews and everyone else — is miserably incomplete and poorly tracked. My job is about presenting facts to contextualize the news of the day, horrible as it may be. This time, I had to tell my family that I didn’t have them.

We don’t know if the vandalism at Chesed Shel Emeth was technically a hate crime. The motives behind it may well be uncovered. What we do know is that there is a long tradition of desecrating Jewish cemeteries, from Nazi Germany to present-day France and New York. And whatever the particulars, the news hit at a time when the Jewish community has been put on edge by threats to Jewish community centers where kids go to preschool and their retired grandparents take Kabbalah-infused yoga classes.

That’s why our project, “Documenting Hate,” an attempt to create a reliable database of hate crimes and bias incidents, asks victims to submit their stories. When I read the submissions, it’s clear that defining “hate crimes” can be as elusive as reliable data tracking them. It’s just as clear that we need to make the attempt to define them, report them, investigate them — to gather enough, at least, for context.

Yes, it’s about confronting the ugliness and comforting the scared. But it’s also about giving real answers, using actual numbers and telling true stories when our children ask questions like, “What happened to the Jews?”

Ariana is an engagement reporter at ProPublica.