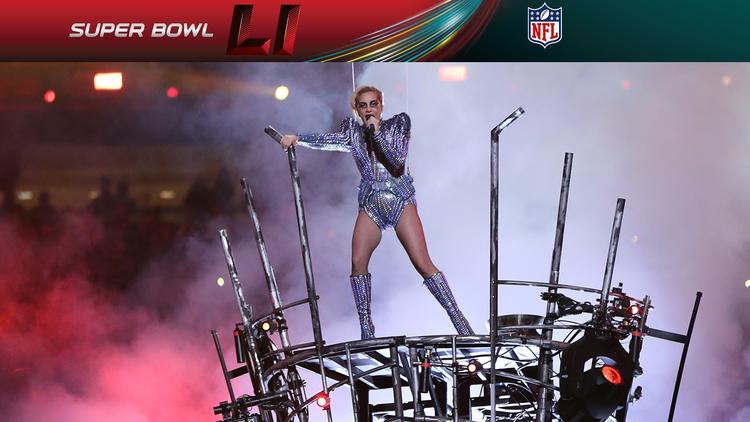 By beginning with Irving Berlin’s “God Bless America” and then switching to Woody Guthrie’s “This Land is your Land,” Lady Gaga (Stefani Germanotta, 30) engaged in a subtle but very radical critique of the immigration and other policies of Donald J. Trump. Her switch at the end to quoting the pledge of allegiance with the ending phrase “with justice and liberty for all” was a further critique of Trump’s latent white nationalism. For all.

Ms. Germanotta knew that Guthrie, an American leftist and radical, had written “This Land is your Land” as a satire on Berlin’s “God Bless America,” which he considered insufficiently alarmed, and narrowly nationalistic. He first wrote the lyrics in February, 1940, before he took an epic train ride across the country to New York. Ronald Briley, in his article “Woody Sez”: Woody Guthrie, the “People’s Daily World,” and Indigenous Radicalism,” California History 84.1 (2006): 30-43, shows that Guthrie had a regular column in the West Coast Communist newspaper, The People’s Daily World, in the year leading up to his composition of the lyrics (the tune was lifted from the Carter family).

Guthrie was born and brought up in Oklahoma. His father had been a small town realtor who opposed socialism, but who lost his business in the mid-1920s. Then after his mother developed a severe mental illness that made her a threat to those around her, Guthrie went with his father to Texas, where Guthrie Sr. got a job managing a boarding house.

In 1931-1939 the US Midwest experience one of the worst droughts in American history, devastating farmers throughout the Midwest and especially in Guthrie’s native Oklahoma. This was on top of the Great Depression, caused by a shrunken money supply and the unwillingness of either business or government to invest sufficient money in the economy after the 1929 stock market crash. The Dust Bowl was caused by an unusually cool Pacific Ocean and an unusually warm Atlantic Ocean, which in combination operated to weaken the jet stream and pull it south. Ordinarily it stretches from the west coast of Mexico, where it picks up moisture, up into the Midwest, where the moisture came down as rain. Climate scientists are terrified that one result of our spewing of billions of tons of carbon dioxide into the atmosphere every year will be to bring back the Dust Bowl and make it a very long term phenomenon.

In 1936 Woody went out to California to see for himself the conditions of the Okies, Oklahama residents forced off their land by the Dust Bowl and turned into penniless refugees on the West Coast. He was shocked at how badly these refugees were treated by the Californians. He was also distressed by the high rents, comparing them to armed robbery.

I want to underline this point. Some of the background of “This Land is your Land” is distress about how refugee residents of California were being treated. I think we know what Guthrie would have thought about the surge of right wing anti-immigrant feeling in today’s America. Ironically, Oklahoma, then a source of Internally Displaced People, is today among the states most hardhearted against refugees. He also had a grudge against banks that had foreclosed on the farmers, in his view greedily and heartlessly, instead of being more patient about eventually being paid.

Guthrie settled in Glendale with the help of relatives, and fell in with members of the ‘Wobblies’ (Industrial Workers of the World), and got a job singing on radio. Briley writes,

“Guthrie’s political contributions to the radio program were solicited by KFVD station owner Frank Burke. In fact, Guthrie did some reporting for Burke’s progressive newspaper, The Light. Angered by how the capitalist system abandoned the unemployed living in Hoovervilles along the highways and underneath the bridges of America, Guthrie reported, ‘A drunk don’t like his own vomit. And a dizzy Profit System don’t like its own filth.'”

Guthrie associated with and sang for left-wing crowds, including the Communist Party, though he probably never joined. He was a Midwestern Christian socialist and maintained that the New Testament mandated that all wealth be owned in common. This old time religion, he called “Commonism.”

Briley quotes him as describing Wall Street as where “the workers git worked on an the reapers get reaped an the farmers get plowed under.”

So those are the considerations that were on Woody’s mind when he composed the lyrics for “This Land is your Land.” Moreover, there are lyrics from Guthrie’s original 1944 recording that are no longer heard very often. Pete Seeger (a friend of Guthrie’s) along with his grandson and Bruce Springsteen, sang some of them on the Mall in 2009:

“There was a big high wall there that tried to stop me;
The sign was painted, it said private property;
But on the back side it didn’t say nothing;
That side was made for you and me.

In the squares of the city, In the shadow of a steeple;
By the Relief Office, I’d seen my people.
As they stood there hungry, I stood there asking,
Is this land made for you and me?

Of course, the meaning of the Wall has changed in the past year and a half. But that only makes the words more poignant.

Lady Gaga only sang the more well known lyrics, but they are powerful enough. They voice the sentiments of a great American poet of the working class, in the tradition of Declaration of Independence, the Bill of Rights, and Walt Whitman.

When I am a Syrian refugee founding a company in Michigan, this land is my land.

When I am an Iranian-American scientist working on a cure for diabetes , this land is my land.

When I am a Somali woman and former refugee now elected as a state representative in Minnesota, this land is my land.

When I am a Gay Libyan refugee doing my medical degree all over again to cure Americans, this land is my land.

When I am an Iraqi refugee in Buffalo who did a degree in Social Work to help American families, this land is my land.

When I am a Yemeni refugee mother working in a cafeteria as her two young daughters go to elementary school, this land is my land.

When I am a Sudanese “lost boy” refugee now working as a US diplomat for the State Department, representing America abroad, this land is my land.

Woody Guthrie knew how the Okie refugees were treated in his own day. His song is a biting satire, not a celebration. He knew that as long as the super-rich could act in a predatory manner with impunity, as long as the laws of wages and property were made by pliant politicians in the back pocket of the billionaires, this land isn’t really for you and me.

That is why we must insist all the harder that it should be, and make it so. Not just for those born here but for everyone who is being shown the back of the Wall.

Pete Seeger and Bruce Springsteen – This Land is Your Land”