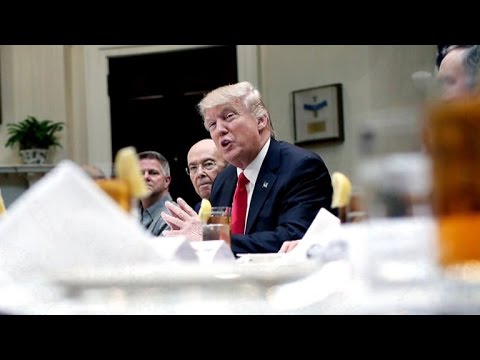 When Trump issued his executive order halting immigration from seven countries, suspending the refugee program, and banning Syrian refugees indefinitely, I wrote that he might well get away with it, since the judiciary tends to defer to the executive on issues of national security and on foreign affairs. This one is both.

But I was too pessimistic. US District Judge James Robart of Seattle, a Bush appointee, issued a judgment suspending the Executive Order on the grounds that it is unconstitutional and places an undue burden on the state of Washington and on its 25,000 residents from the 7 countries that Trump singled out.

This is an incredible, tremendous ruling. First of all, the Republicans had argued that Washington state’s attorney general did not have standing to sue, since the EO was nothing to do with him. But Judge Robarts decided otherwise, given that the EO affects so many people who are residents of the state.

Being recognized as having standing to bring a legal action is absolutely crucial. Washington Attorney General Bob Ferguson is to be congratulated for passing this hurdle.

Robart wrote, according to the Seattle Times:

He even mentioned the harm to the state’s great universities, a point I have made in the past.

Steve Bannon and Stephen Miller, the Neofascists who wrote the EO, were hoping that immigrants would be treated by the US courts as foreigners with no rights or standing.

Robart is saying that residents of a state in the US have rights that the president cannot simply erase by fiat. He is further saying that institutions of the state itself, including universities, have a right to pursue their work unmolested by discriminatory policies.

Robart noted that to get a temporary restraining order (TRO), a plaintiff must show (1) ‘that he is likely to succeed on the merits, (2) that he is likely to suffer irreparable harm in the absence of preliminary relief, (3) that the balance of equities tips in his favor, and (4) that an injunction is in the public interest.”

These criteria are crucial because they demonstrate that Robart did not stay the EO in a neutral way. He did so because he believes that the suit will likely succeed on the merits. He has made a prediction of success in the higher courts for the plaintiffs (the state of Minnesota joined in the suit).

The state of Washington was recognized in the ruling as a legal protector for residents who might not be able to defend themselves. In the Batman stories, Dick Grayson (Robin) is the ward of Bruce Wayne (Batman). The court is saying that where you have that kind of relationship, you cannot harm Robin without harming Batman.

The court also accepted the state’s argument that the EO has “inflicted upon the operations and missions of their public universities and other institutions of higher learning, as well as injury to the States’ operations, tax bases, and public funds. These harms are significant and ongoing.”

Robart also found that his Temporary Restraining Order couldn’t be restricted to Washington, since the Constitution requires “a uniform Rule of Naturalization” and Congress itself had instructed that immigration laws be enforced “uniformly.” The order therefore must obtain in the whole country.

If states have standing, if residents from the 7 banned countries have standing, and if a relatively conservative judge believes that they will likely succeed in their suit against Trump, then we have a fighting chance of defeating this thing.