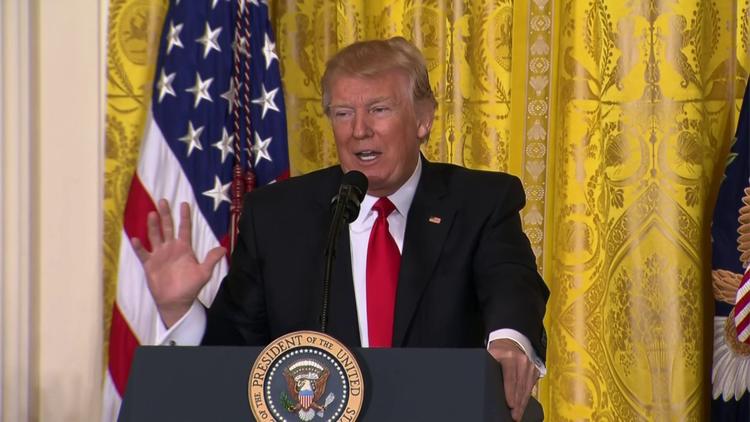 So Trump did rant and rave at the press on Thursday. But not at all the press. He has never attacked Breitbart, the vehicle for white supremacist falsehoods piloted by his Rasputin, Neofascist Steve Bannon (White House chief of strategy and National Security Council eminence grise).

And that is the real significance of his accusation that the major corporate media outlets are “fake news.” What he means by that is their refusal to adopt a white supremacist editorial line.

He doesn’t actually mind fake news, or he would fire Bannon and dissociate himself from Breitbart, which is mostly filled with far-right racist falsehoods. There was, for instance, the fake news about the alleged Muslim immigrant mass rapes in Cologne a little over a year ago. Breitbart beat the drums for it, but the the story was not true. Or then there was the phony story about Muslims burning a church in Germany, also played up by Breitbart and also not true. Trump is deeply influenced by Bannon’s insane conspiracy theories; if you want to know why he keeps saying false and/or unbalanced things, consider that he gets his news from alt-Neonazi toilet paper like Breitbart.

He is attacking mainstream media for not following the Breitbart lead, and for disrupting the narrative that he and Bannon are trying to spread, of persecuted white people suffering at the hands of invading Mexicans, Chinese and Arabs.

He minds the mainstream media giving over their airwaves to critics of his Muslim ban (not everyone has; Rupert Murdoch’s Faux News has been a cheerleader for it and even MSNBC’s Chris Matthews has insisted that Judge James Robart and the panel at the 9th Circuit were out of line in challenging it).

He minds the mainstream media reporting on the spike in threats to synagogues since he was inaugurated, and on his White House refusal to mention Jews in his Holocaust message (“other people suffered”). That is why he was so rude to Jake Turx of Ami magazine. Bannon and Trump think the liberal Jewish elite are behind Fed monetary policy and pro-immigration policy (i.e. the Jews are to blame for the Muslims).

He minds negative coverage of his policies toward Mexico, including his smearing of Mexican-Americans as rapists and drug dealers and threat to send down US security forces to take care of their ‘bad hombres.’ He has no Latino cabinet members. He clearly does not like Latinos or think they belong in the US (even though old Castilian Californio families have been here since 1769, rather before the petty grifter Frederick Trumpf began his seedy activities in 1885 in Queens).

What Trump is trying to do by vilifying the corporate media is to bring them to heel and to put pressure on them to bring more Breitbart and Stormfront commentators on air to spew Trumpist talking points.

Ironically, Jared Kushner is also playing a role in trying to bring e.g. CNN to heel. He’ll be sorry.

This is not cute, folks, and for all the giggles it produces on the late night opening monologues, it is extremely sinister.

When someone like Trump moves the signposts on allowable public discourse, things can get ugly fast. You start having panels on cable news at 2 pm debating about whether African-Americans have only themselves to blame because of their laziness and violence. (You can tell this is propaganda because self-contradictory; lazy people wouldn’t have the vim for violence). You start having anchors who think that Islam is an intrinsically violent or anti-democratic religion (this has already happened on HBO via phony liberal and stealth supremacist Bill Maher). You start having commentators opining on the dangers of undocumented immigrants voting in New Hampshire.

Trump hopes to keep the pressure on, by portraying independent news and commentary as inherently false and unfair, and to use his shock troops to intimidate the media into taking his line, which is to say, the Neofascist line.

Trump went on to boast about his New Improved Mussolini foreign policy:

I have directed our defense community headed by our great general, now Secretary [James] Mattis. He’s over there now working very hard to submit a plan for the defeat of ISIS, a group that celebrates the murder and torture of innocent people in large sections of the world. It used to be a small group, now it’s in large sections of the world.They’ve spread like cancer. ISIS has spread like cancer — another mess I inherited.

ISIL does not actually murder people in large sections of the world. Obama rolled it back into being a relatively small terrorist group. All it has left in Iraq is part of the city of Mosul; it has half of dusty, remote Raqqa province in Syria. It has been kicked out of Sirte in Libya, in part by Obama’s AFricom strategy. While small terrorist cells can hit anywhere at any time, portraying ISIL as actively committing massive violence in large sections of the world is just vast exaggeration and fear-mongering.

“And we have imposed new sanctions on the nation of Iran, who has totally taken advantage of our previous administration, and they’re the world’s top sponsor of terrorism, and we’re not going to stop until that problem is properly solved. And it’s not properly solved now, it’s one of the worst agreements I’ve ever seen drawn by anybody.”

In fact, Secretary of Defense Jim Mattis has made it clear that he is not tearing up the Iran nuclear agreement, so Trump may as well stop complaining about that deal. Trump doesn’t seem to realize that his own policy is to support Russia in Syria, and Russia is allied with Iran in Syria. Moreover, ISIL was only rolled up in Iraq with Iranian help.

Iran is not the world’s primary backer of terrorism, despite what Washington pols keep saying. They considered Hizbullah’s struggle to liberate illegally occupied south Lebanon from Israeli occupation to be ‘terrorism,’ and minded that Iran backed Hizbullah. A country like the US, which waged a war of aggression on Iraq, set in train the deaths of hundreds of thousands of Iraqis, bombed urban residential districts, made four million Iraqis homeless, and left behind a country of orphans and widows, really doesn’t have room to criticize Iran, which has not launched a war of aggression on a neighbor in modern history.

Then Trump boasted about plans to vastly expand the Pentagon budget. The US has less than 10,000 troops in Afghanistan and half that in Iraq. Aside from those two situations, America is not at war. Yet is has a military budget that roughly 40 percent of world military spending! The US is 5 percent of the world population. With the exception of some police actions we aren’t at war. We don’t need all that military spending.

Actually, if Trump worked to make Central America more prosperous, that would be a much better use of several hundred billion dollars going to the Pentagon. And that step, not building a wall, is what would reduce immigration to the US across its southern border (though note that already, more Mexicans leave annually than come in, because of the good Mexican economy).

None of this is funny. Bad.