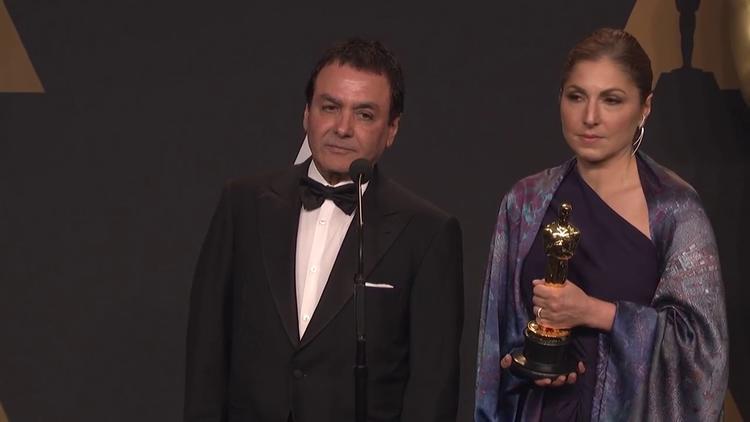 “We believe there is no best country, best gender, best religion or best color,” the directors of the five Oscar foreign films nominees wrote in a joint statement.

Thousands of people braved London’s winter drizzle on Sunday for a screening of the Oscar-nominated movie that has become a rallying point for opponents of U.S. President Donald Trump’s immigration policy.

Hours ahead of what looked set to be the most politicized Academy Awards for years, London Mayor Sadiq Khan made clear his political motivation in hosting the British premiere of the “The Salesman,” whose Iranian director is boycotting the Hollywood ceremony.

“President Trump cannot silence me,” Khan said to cheers from the crowd gathered in Trafalgar Square. “We stand in solidarity with Asghar Farhadi, one of the world’s greatest directors.”

Farhadi, who won an Oscar in 2012 for “A Separation”, won another Best Foreign Language Film at the Academy Awards Sunday but is stayed away in protest of Trump’s attempt to ban people from seven Muslim-majority countries from entering the United States.

In a video message from Tehran, Farhadi thanked the “dear people of London who are gathered on this cold afternoon,” saying he was heartened by the reaction of filmmakers and artists to “the oppressive travel ban of immigrants.”

“I hope this movement will continue and spread for it has within itself the power to stand up to fascism, be victorious in the face of extremism and saying no to oppressive political powers everywhere,” Farhadi said.

Farhadi and the film’s lead actress, Taraneh Alidoosti, both said over a month ago they would not travel to Los Angeles to represent “The Salesman” because of Trump’s ban, even if that meant they would be exempt from winning.

The ban was later overturned by U.S. courts but the administration is working on a new executive travel order.

In a statement to Hollywood trade publication Variety Friday, Farhadi’s publicist said that engineer Anousheh Ansari, who was the first female space traveler, and Firouz Naderi, a former director of NASA’s Solar System Exploration program, would take Farhadi’s place at the Oscars and represent him on stage should the film win.

Ansari moved to the United States from Iran in 1984 as a teenager and made headlines as the first Iranian and first Muslim woman in space in 2006. Naderi left Iran for the United States in 1964 and worked for some 30 years in positions with the U.S. space agency.

On Friday, Farhadi and the five other directors in the running for this year’s foreign-language Oscar issued a joint statement blaming “leading politicians” for creating “divisive walls.”

Without explicitly referring to any politician, they said, “On behalf of all nominees, we would like to express our unanimous and emphatic disapproval of the climate of fanaticism and nationalism we see today in the US and in so many other countries, in parts of the population and, mostly and unfortunately of all, among leading politicians.”

Regardless of who wins the Oscar, “we believe there is no best country, best gender, best religion or best color,” the directors added. “We want this award to stand as a symbol of unity between nations and the freedom of the arts.”