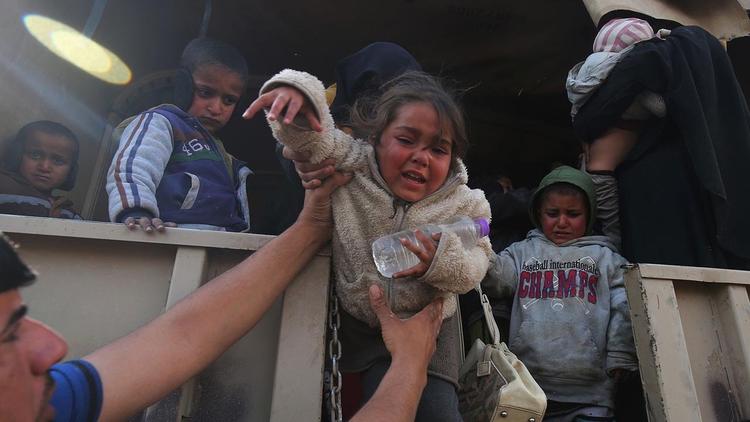 “Finding survivors is very difficult because the area is completely destroyed,” an authority told reporters. “It’s a very big disaster, indeed we can describe it as a disaster.”

Dozens of residents were buried in collapsed buildings in the Iraqi city of Mosul after a U.S. airstrike Wednesday as rescuers tried to recover their bodies, civil defense agency officials and locals said Thursday.

At least 137 people, mostly civilians, were killed when a bomb hit a building in western Mosul, with another 100 innocent people thought to have died in nearby areas, according to Rudaw, a Kurdish news agency operating in northern Iraq. “Some of the dead were taking shelter inside their homes,” Hevidar Ahmed, an eyewitness told the news outlet.

Civil Defense Chief Brigadier Mohammed Al-Jawari told local reporters that rescue teams were retrieving bodies from under the debris in the Jadida district near Rahma hospital. Jawari was quoted by al-Mosuliliya channel in a statement saying teams had so far recovered 40 bodies from buildings that collapsed.

“Finding survivors is very difficult because the area is completely destroyed,” he told reporters. “It’s a very big disaster, indeed we can describe it as a disaster.”

The U.S. Central Command, which coordinates U.S. military action in Iraq said in a statement, “We are aware of reports on airstrikes in Mosul resulting in civilian casualties. The Coalition conducted several strikes near Mosul and we will provide this information to our civilian casualty team for further investigation.”

With the only force able to launch large-scale air attacks, the U.S. command also stated that there were five strikes near Mosul Thursday, claiming that they had destroyed five Islamic State group units and a sniper team, as well as 11 fighting positions, vehicles and artillery equipment.

Human rights groups have expressed concern over the mounting civilian death toll, while U.S. claims that it only targets Islamic State group wearing thin with residents that continue to suffer the casualties.

CGTN: “Civilians in Mosul suffer as battle against ISIL rages”