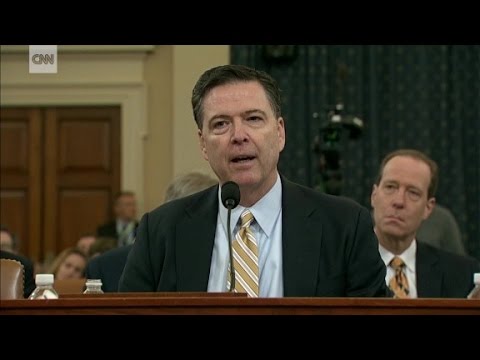 FBI Director James Comey confirmed Monday that his agency has since last summer been investigating the circle of Donald J. Trump for their contacts with the Russian Federation during last year’s election campaign.

He also denied Trump’s allegations that former president Barack Obama ordered wiretaps on him at Trump Tower last fall before the election. Trump had called Obama “sick” in his tweet making the charge. Trump should retract and apologize to president Obama, but of course he will not, since the meaning of Trumpism is never having to say you are sorry.

For reasons that no one can fathom, none of the Democrats on the committee bothered to ask Comey about his own out-sized role in the election.

He reported to Congress that he was investigating Hillary Clinton’s private server and combing through her emails, attempting to discover whether she had been careless with classified material. He thereby cast a pall on her integrity that certainly had more public effect than anything the Russians may have done. It was an egregiously unfair announcement.

I would argue that no such investigation should have been launched publicly of a major candidate in an election year. There was not actually anything suspicious about a private server. As for the charge that her personal server was more at risk of being hacked than a government one, this is not true in any way that matters. Government servers are hacked all the time. The private information on 4 million government employees was hacked, allegedly by the People’s Republic of China. Even the CIA servers have been hacked.

Yet Comey was carrying on two investigations, not one. He was also investigating the Trump circle for their Russia ties.

But he did not let the public know about that investigation last summer or fall.

By revealing the one but not the other, he tipped the scales in favor of Trump.

While I appreciate the hard and dedicated work of FBI agents who actually catch criminals or break up terrorist plots, the ambiguous role of the agency in establishing the rightward political tilt of the country also has to be acknowledged. It is easy for directors to fall into believing that bolstering the current power elite is the same as supporting The American Way. This is not the first time in American history that the FBI gave covert help to the right wing. What is mystifying is that Hillary Clinton was the least leftist Democrat you could imagine, being in the back pocket of Wall Street and of billionaires like Haim Saban.

Then, when Trump plunged in the polls after his salacious interview with Billy Bush came out, Comey blunted Clinton’s momentum by announcing that he’d found more emails (on the laptop computer of Anthony Weiner, who appears to have had some Clinton emails shared with him by his wife, Clinton aide Huma Abedin).

It is arguable that Comey violated the Hatch Act by openly intervening in the election in its last days.

The FBI at no point found anything prosecutable in Hillary Clinton’s emails, whether on her own server or on Weiner’s laptop. But the general public was given the firm impression that she’d done something so wrong that she was under an FBI investigation.

If you were looking for reasons for the black swan event of Trump’s election, Comey’s unfair actions toward Clinton and in favor of Trump would have to be at the forefront.

I’m not alleging that Comey is or was in the tank for Trump. I’m only saying that Comey acted in such a way as to disadvantage Clinton unfairly.

Comey inflicted significant damage on Trump by his testimony on Monday. So he is not showing signs of attempting to shore Trump up.

It is possible that Comey was being procedurally correct. His intervention after the Billy Bush interview was leaked has been interpreted as a case of being careful with Congress. He had told them he’d reviewed all the Clinton emails. Then Weiner was investigated for some sort of sex charge, and new emails showed up, and Comey was afraid word would reach Congress that his investigation had not actually been complete. So he announced the further examination of the laptop and cleared the emails on it as not having been classified within a couple of days. (I’m not sure why it took so long; it is just a keyword search).

On the other hand, the Tea Party Congress was not pressuring him about Russian contacts with Trump’s people, and that investigation was not conclusive, so he may not have felt the same duty to report to Congress.

The conspiracy-minded might conclude that Comey is a Pence supporter, and has cleverly maneuvered Pence into a position where he has a shot at the presidency if Trump is forced out over the Russia scandal.

I am not among the conspiracy-minded, and would need to have proof before entertaining any allegations that Comey is deliberately interfering in domestic politics and engineering individuals into power.

On the face of it, it seems most likely of all that the hard line Tea Party Congress managed to coerce him into this behavior.

I conclude that Comey has acted in an unwise and non-neutral way and that historians will place a good deal of the blame for the Trump disaster on him. Whether he has been driven by a narrow proceduralism, or a form of unconscious sexism, or an unspoken GOP bias is at the moment impossible to know. What is clear is that the vast majority of Americans have less reason than ever to trust the politics of the FBI. And maybe we need another investigation, with subpoenas for Comey’s emails.