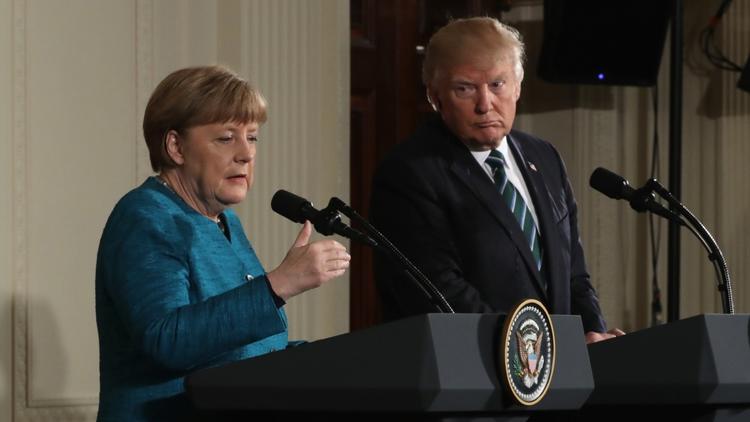 After Trump falsely accused President Obama of having him wiretapped at Trump Tower during the campaign, Sean Spicer upped the ante by charging that Obama could have used the British GCHQ electronic surveillance agency to carry out the monitoring. GCHQ does in fact outrageously invade people’s privacy online, but there is no reason to think it targeted Trump or that President Obama could have ordered them around. Although initially it was reported that Spicer apologized to an outraged British government, he denies any apology was proffered.

After an awkward meeting with German Chancellor Angela Merkel, the leader of the Free World, Trump tweeted out an insulting message accusing Germany and other NATO countries of not paying the US enough for the “very expensive” defense umbrella Washington spreads over Europe.

But NATO countries don’t pay anything to the United States. Trump does not understand how NATO works. They just devote some proportion of GDP to their own defense. The idea that the US is owed anything by European countries for deigning to erect a North Atantic Treaty Organization over their heads is daft. It is the US that wanted NATO, for its own Cold War purposes. About 5 NATO countries devote 2% of GDP to defense spending, and the rest have (unrealistically) pledged to do so over the next 5 years or so. They’d be better off spending the money on their people. They certainly are not giving any of it to Washington, however.

Trump’s threat to slap a 35% tariff on BMW automobiles made at a new plant in Mexico and exported to the US could meet with a German lawsuit at the World Trade Organization, German experts agree.

Trump’s budget cuts roughly 38% from the $56 bn. international affairs section, including deep cuts to the State Department, to US AID, and to foreign aid. In the 1990s, the era of the ‘peace dividend’ after the collapse of the Soviet Union, the US walked away from any involvement in Afghanistan after funding a major jihad there against the Soviets. (The US withdrawal was negotiated by George H. W. Bush with Soviet premier Mihail Gorbachev as a quid pro quo for the Soviet withdrawal). In the subsequent vacuum, the Taliban took over Afghanistan and hosted al-Qaeda, and 9/11 was the result.

The European Union has complained bitterly about proposed US cuts in development aid. The UN is in the midst of a major, and so far amazingly successful, bid to reduce absolute poverty in the world. Trump’s stinginess would endanger the success of this program. In Trump’s budget, only Israel’s $3 bn a year is sacrosanct. Israel is a wealthy country that doesn’t need US aid.

At this rate we won’t have any allies soon.