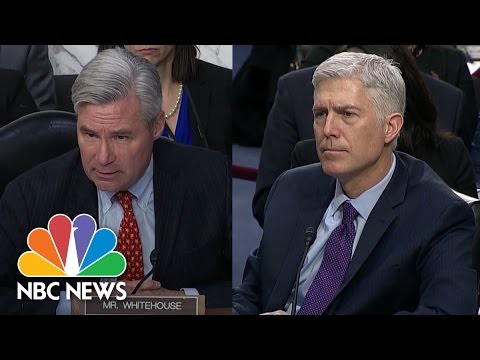 Judge Neil Gorsuch claims he ‘speaks for’ himself, but secretive sources have spent millions to get him confirmed for a reason

Putting a rare spotlight on the shadowy conservatives pushing for confirmation of Judge Neil Gorsuch, Sen. Sheldon Whitehouse (D-R.I.) on Tuesday directly questioned the nominee on the dark money groups supporting his bid.

During the second day of questioning by the Senate Judiciary Committee, Whitehouse called on Gorsuch to urge his undisclosed donors to reveal themselves “as a matter of respect for the process…so we can evaluate who is behind this effort.”

The Hill reported that, while “he did not name Judicial Crisis Network by name, Whitehouse asked why the group spent at least $7 million to keep President [Barack] Obama’s nominee, Merrick Garland, from getting a confirmation hearing and is now spending $10 million to get Gorsuch confirmed.”

“You’d have to ask them,” was Gorsuch’s retort, to which Whitehouse replied: “I can’t because I don’t know who they are. It is just a front group.”

According to the Los Angeles Times:

The exchange seemed to annoy the otherwise unflappable nominee.

When Republicans on the panel came to his defense and gave Gorsuch another opportunity to address the issue of what Whitehouse called “dark money” supporting his nomination, Gorsuch was resolute.

“Nobody speaks for me,” he said of the suggestion the group represented him. “Nobody. I speak for me. I am a judge. I don’t have spokesmen. I speak for myself.”

Watch the exchange below.

The Judicial Crisis Network is among a tight-knit network of conservative organizations and activists that have been actively trying to reshape the American judiciary system, according to New York Times journalist Eric Lipton.

In a recent exposé, Lipton revealed the effort currently being led by conservative activist Leonard Leo, former executive vice president of the conservative Federalist Society, who was tapped by the White House to “shepherd the Gorsuch nomination.”

This judicial reformation is being coordinated from Washington by a relatively small team closely aligned around Mr. Leo, who is on leave from the Federalist Society while he helps the White House shepherd the Gorsuch nomination. The network includes John G. Malcolm of the Heritage Foundation and Ann Corkery, a Washington lawyer who along with her husband, Neil, oversees the Judicial Crisis Network and related dark-money groups that also support the cause.

While a free-market agenda and the desire to place judges who will be more skeptical of federal and state regulations is a driving force, several central players in the group are also motivated by intense religious beliefs.

Appearing on Democracy Now! on Tuesday, Lipton further revealed that the Judicial Crisis Network—a so-called grassroots organization that has spent millions of dollars on pro-Gorsuch television and radio ads—only has two unknown donors listed on their tax records, which he tied back to Ann and Neil Corkery and their organization the Wellspring Committee.

According to OpenSecrets.org, the Corkery’s have either been board members or officers with “the Catholic League, an aggressive defender of the church against what it sees as ‘slanderous assaults,'” and “the National Organization for Marriage, which has fiercely fought official recognition of gay marriage,” in addition to the Judicial Crisis Network.

Another shadowy group, the Koch Brothers’-backed Concerned Veterans for America, has also been a leading proponent of Gorsuch, flooding conservative districts where a Democrat faces re-election with calls, urging voters to contact their Senators and demand confirmation, according to the right-wing National Review.

Going a step further and connecting the conservative donors with Gorsuch’s controversial view in regards to the “Chevron deference,” Lipton explained how his confirmation could pave the way for massive deregulation.

In a 2016 court opinion, Gorsuch wrote that the idea that courts should defer to experts at agencies has “permit[ted] executive bureaucracies to swallow huge amounts of core judicial and legislative power and concentrate federal power in a way that seems more than a little difficult to square with the Constitution of the framers’ design. Maybe the time has come to face the behemoth.”

[Y]ou look at Judicial Crisis Network. Who—in addition to spending millions of dollars on ads to get Gorsuch confirmed, what else is Judicial Crisis Network spending a lot of money on? It’s spending millions of dollars to get Republicans elected as state attorneys general. And the reason that is, is they want Republican attorneys general to bring cases in state and federal court that challenge federal regulations, which they think are overreaching, and then to get those cases into the court, in which they then help pick the judges and have more conservative judges, and then will have decisions which limit the federal powers.

And I think that, you know, that Gorsuch is—if you look at his record, it’s reasonable to expect that he will—he will believe in a more—a narrow interpretation of the law and that any time that a federal agency goes too far, that it’s appropriate for the courts to review it and decide if it has stepped beyond its bounds.

Watch the segment below: