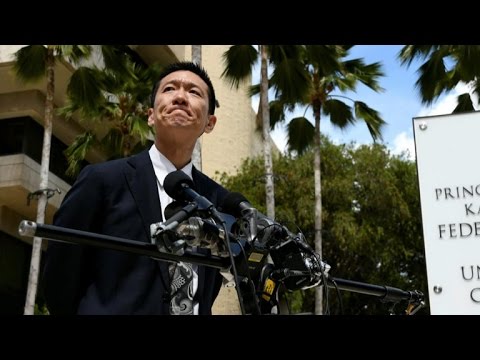 Derrick Watson, US District Court judge in Honolulu, has issued a nationwide Temporary Restraining Order against Trump’s second attempt at an Executive Order excluding people from Muslim-majority countries from the United States. Watson found that the state of Hawaii, which brought the suit, was likely to prevail in its complaint that the president’s order would impose irreparable harm on the University of Hawaii and on the state’s tourism industry. He also found that it violates the constitutional rights of American Muslims. (I made the same argument soon after it was released).

It is delicious that Hawaii stepped up here, as the most ethnically diverse state in the nation, where the quarter of the population that is Japanese-Americans well remembers the internment camps to which their families were consigned during WW II. Hawaii has a lot of immigrants, and those immigrants found companies and act as entrepreneurs, adding enormous value to the Hawaii economy. 1 in 6 residents of Hawaii is foreign-born, and 20% of business revenue is generated by 16,000 new immigrant businesses. Trump’s white nationalism is completely out of place in Hawaii. And by the way, Hawaii and California, the diverse states, are the future of America. Trumpism can only slow that down, not stop it.

Judge Watson had two plaintiffs in the case. One is the state of Hawaii. The other is Ismail Al-Shikh, the head of the Hawaii Muslim Association. Al-Shikh alleged not only various sorts of harm to himself from the EO (his mother-in-law is Syrian and might to be able to visit him) but also harm from a violation of the Establishment Cause of the first amendment.

Judge Watson notes, “The clearest command of the Establishment Clause is that one religious denomination cannot be officially preferred over another.” Larson v. Valente, 456 U.S. 228, 244 (1982). To determine whether the Executive Order runs afoul of that command, the Court is guided by the three-part test for Establishment Clause claims set forth in Lemon v. Kurtzman, 403 U.S. 602, 612-13 (1971). According to Lemon, government action (1) must have a primary secular purpose, (2) may not have the principal effect of advancing or inhibiting religion, and (3) may not foster excessive entanglement with religion. Id. “Failure to satisfy any one of the three prongs of the Lemon test is sufficient to invalidate the challenged law or practice.” Newdow v. Rio Linda Union Sch. Dist., 597 F.3d 1007, 1076–77 (9th Cir. 2010).

The Lemon test was used to strike down blue laws that forbade businesses to operate on Sunday. The Supreme Court found that there was no secular purpose to a law that stopped everyone from working on a day of religious observance.

Watson finds that the EO targets six countries with a Muslim population of between 90% and 97% and so obviously primarily targets Muslims.

Judge Watson shows that it is permitted to take into account the intent of a law when there is a question of it violating the Establishment Clause:

“It is well established that evidence of purpose beyond the face of the challenged law may be considered in evaluating Establishment and Equal Protection Clause claims.” Washington, 847 F.3d at 1167–68 (citing Church of the Lukumi Babalu Aye, Inc. v. City of Hialeah, 508 U.S. 520, 534 (1993) (“Official action that targets religious conduct for distinctive treatment cannot be shielded by mere compliance with the requirement of facial neutrality.”)

Those legal scholars who argue that it is not permitted to take into account the legislative history of a law or regulation, but that the ‘facial’ language of the law should be determinative don’t seem to know as much case law as Judge Watson.

The judge then goes on to cite the many statements by Trump showing that he has an animus against Muslims and that animus underlies his Executive Order banning everyone from 6 Muslim-majority countries. There are many such statements, e.g.

Mr. Trump was asked: “The Muslim ban. I think you’ve pulled back from it, but you tell me.” Mr. Trump responded: “I don’t think it’s a rollback. In fact, you could say it’s an expansion. I’m looking now at territories. People were so upset when I used the word Muslim. Oh, you can’t use the word Muslim. Remember this. And I’m okay with that, because I’m talking territory instead of Muslim.”

If you want to use “territory” as a smokescreen to allow you to discriminate against Muslims, you probably shouldn’t say that publicly.

Judge Watson argues that the violation of the Establishment Clause is so egregious here, and the interference with people’s rights to travel and associate freely is so serious, that these factors outweigh the terrorism and security considerations instanced by the trump administration.

The judge didn’t say this, but I’d like to point out that the government gave as a reason for its travel ban the involvement of two Iraqi-Americans in an overseas plot, but then took Iraq off the list!

On to the other set of issues:

Judge Watson notes that the State of Hawaii alleged two major harms of the EO. The first is the University of Hawaii system, which is an “arm of the state.” The University, which has 55,756 students, pointed out that it “recruits students, permanent faculty, and visiting faculty from the targeted countries.” The EO harms the whole state of Hawaii “by debasing its culture and tradition of ethnic diversity and inclusion.”

The Iranian, Syrian, Libyan, Somali, Yemeni and Sudanese students who are excluded from the country “are deterred from studying or teaching at the University, now and in the future, irrevocably damaging their personal and professional lives and harming the educational institutions themselves.”

The University of Hawaii has 23 graduate students, several permanent faculty members, and 29 visiting faculty members from the six excluded countries. Excluding those without visas would impose a loss of tuition, and those with family members abroad would be prevented from receiving them as visitors.

Not only would some of these persons, and others, be dissuaded from continuing their search for knowledge in the US, “The State argues that the University will also suffer non-monetary losses, including damage to the collaborative exchange of ideas among people of different religions and national backgrounds on which the State’s educational institutions depend.” The EO is interfering not just in finances but in the very purpose of the University, which is the free exchange of ideas.

The EO also interferes with the University’s ability freely to recruit the most qualified faculty and students and with its commitment to being “one of the most diverse institutions of higher education” in the world. Moreover, the university envisages it as difficult to run its Persian Language and culture program without the ability to have visitors from Iran.

The State’s summary of the harm to the University of Hawaii includes educational and intellectual harms (and ethnic diversity is itself an intellectual advantage) as well as financial and monetary ones. In the Lockean tradition, property harms are typically the ones taken most seriously.

Hawaii’s second argument is that the EO will harm its tourism industry, a central component of its economy. The chaotic and arbitrary way the first EO was rolled out, and the uncertainties attending the second one will “depress tourism, business travel, and financial investments in Hawaii.”). Middle East visitors in the month after the first EO fell by 1/5. Tourism brings in $15 billion a year to the Hawaii economy (it is a small state of 1.5 million people).

Hawaii has a point, and Judge Watson recognized it.

International organizations are beginning to boycott the US as a conference site. A 3000- person European conference pulled out of Philadelphia last week out of disgust at the EO, and went to Mexico City. You figure 4 nights at $250 a night, plus meals at $75 a day, plus taxi and entertainment at $50 a day (and I have kept the numbers low so as to avoid charges of exaggerating). That’s a loss to Philadelphia of at least $4.5 million, from just one conference. Hawaii faces the same problem.