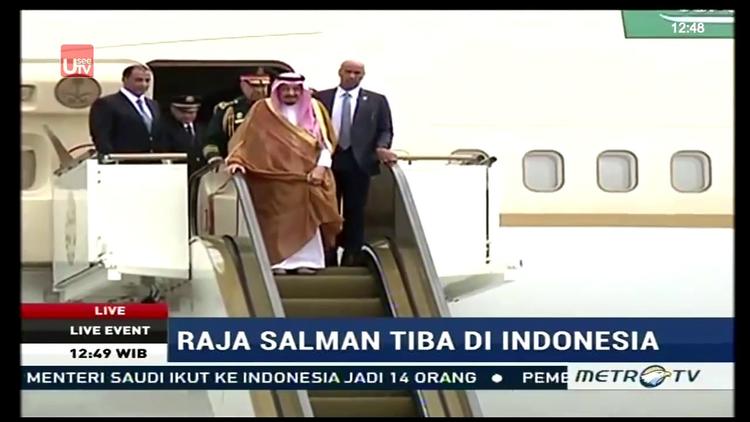 By Babak Mohammadzadeh | (The Conversation) | – –

The House of Saud doesn’t usually go in for long state visits, and no Saudi king has visited Indonesia for half a century. So the fact that the Saudi king committed to a full month away in this part of the world speaks volumes about his government’s mood after a series of strategic miscalculations.

Saudi rulers have always worried about the prospect of diplomatic isolation, and stronger relations with Asia are in some ways part of the usual agenda. But they’ve now become a lifeline with which to save the kingdom from its bad bets in the Middle East. Saudi Arabia’s recent efforts to settle its incessant rivalry with Iran have not paid off, and after flooding the market with cheap oil and engineering a fall in the oil price to Iran’s detriment, the Saudis are now themselves faced with a festering budget deficit, forcing them to slash spending on infrastructure and reduce civil servant perks to get finances under control.

Elsewhere, the devastating war in Yemen is exposing Saudi Arabia to both military pressure and severe international condemnation for the humanitarian catastrophe the campaign has caused. Recent decisions taken in Organisation of the Petroleum Exporting Countries (OPEC), meanwhile, forced Saudi Arabia to swallow a big hit on its oil production, suggesting that it can no longer afford an aggressive anti-Iran policy in Yemen without new allies and partners to shore it up.

In these squeezed times, South-East Asia’s growing economies have much to offer to the Saudis.

Historically, the pilgrimage from Asia to Islam’s holy cities of Mecca and Medina has been an important revenue source for the kingdom’s volatile budget, but King Salman’s failing regional fortunes and financial problems have placed renewed impetus on moving the kingdom away from its traditional dependence on oil.

King Salman has found a receptive audience in the Asian capitals. Malaysia is already making a strong turn to the Saudi fold; in early 2016, it joined military exercises in northern Saudi territory involving around 150,000 soldiers, 2,540 warplanes, 20,000 tanks, and 460 helicopters. The exercise has been fuelling rumours that Malaysia might be swayed to join Saudi Arabia’s military campaign in Yemen, which already benefits from the support of several other Muslim-majority states.

This is not a strange expectation. Personal relations between Prime Minister Najib Razak and the Saudi royal family are reported to be strong, and the Saudis played a key role in helping to save Razak’s political career from a major scandal. By publicly confirming Razak’s claim that an unaccounted US$681m in his bank accounts was a donation from the Saudi royal family, the Saudis helped to counter accusations that he had in fact siphoned the money from heavily indebted state investment fund 1MDB.

Economic opportunities abound. Upon arrival in Kuala Lumpur in late February, national oil and gas company Saudi Aramco signed a US$7 billion agreement with Malaysian oil company Petronas. The deal will pump Saudi investment into a Malaysian petrochemical project valued at US$27 billion, making Aramco the single largest investor in Malaysia. The deal is also expected to improve Malaysia’s chances to compete in oil refining and energy storage, an industry currently monopolised by Singapore in South-East Asia.

Indonesia, too, hopes to attract billions of dollars in Saudi investment. The two countries have signed more than ten memorandums of understanding, building on cultural and religious projects, promoting educational exchange and intensifying trade. Together with Indonesia’s Pertamina, Saudi Aramco has committed to expand Indonesia’s biggest refinery in Java. The total value of the agreements stretches into the billions.

The Saudis are highly skilled in this sort of fast-paced “finance diplomacy”. Like estranged family members coming home with presents, they bring in their wake large sums of money for development finance and the promise of several billions of dollars of investment opportunities for the relations they hope to cultivate.

And beyond pure financial interests, it’s worth remembering that these joint investment ventures create the sort of long-term partnerships that give external partners a stake in Saudi Arabia’s own security and development. These sorts of financial patronage projects extend far beyond trade and commerce – since the 1970s, Saudi oil money has persistently found its way to foreign schools, charities, mosques and nonprofits to promote a religious ideology which is at odds with the traditional brand of moderate Islam practised in South-East Asia. Donations by dozens of Saudi waqfs (Islamic charitable endowments) all fuel the elite’s drive to project itself as the leader of Sunni Muslims the world over.

Investment with the heft the Saudis offer is too tempting to pass up, but King Salman’s visit will only help export his country’s hardline doctrine to places where that could do without it. Both Malaysia and Indonesia urgently need to ease tensions between restive religious communities, but Saudi Arabia aims to open more Islamic schools across South-East Asia, increasing not only literacy in the Arabic language but also Saudi religious teaching and influence. That could be a heavy price tag indeed.