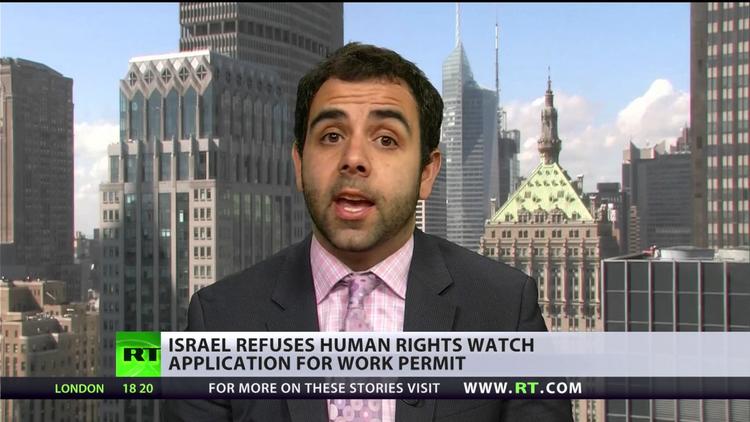 Israeli authorities have denied Human Rights Watch’s application for a work permit for its Israel and Palestine director, on the grounds that it is not a real human rights group, the organization said, according to Al Mezan Center for Human Rights.

In its February 20, 2017 letter denying a work permit for Omar Shakir, the Interior Ministry cited an opinion received from the Foreign Ministry that Human Rights Watch’s “public activities and reports have engaged in politics in the service of Palestinian propaganda, while falsely raising the banner of ‘human rights.’” The denial comes as the authorities seek to limit the space for local and international human rights groups to operate in Israel and the Occupied Palestinian Territories.

“This decision and the spurious rationale should worry anyone concerned about Israel’s commitment to basic democratic values,” said Iain Levine, deputy executive director of program at Human Rights Watch. “It is disappointing that the Israeli government seems unable or unwilling to distinguish between justified criticisms of its actions and hostile political propaganda.”

Human Rights Watch said that the decision was particularly surprising given that the organization regularly meets and corresponds with Israeli government officials, including representatives of the military, the police, and the Foreign Ministry. Last year, the Foreign Ministry asked Human Rights Watch to intervene in a case involving Israeli victims of human rights abuses.

The decision marks an ominous turn after nearly three decades during which Human Rights Watch staff have had regular access without impediments to Israel and the West Bank. Israel, though, has refused Human Rights Watch access to Gaza since 2010, except for one visit in 2016.

Israel’s denial of a work permit to Human Rights Watch comes amid increasing pressure on human rights defenders operating in Israel and Palestine. A law passed by the Knesset in July 2016 targets human right groups, imposing onerous reporting requirements that burden their advocacy. Israeli officials have directly accused Israeli advocacy groups of “slander” and discrediting the state or army. Palestinian rights defenders have received anonymous death threats and have been subject to travel restrictions, and even arrests and criminal charges.

The characterization of Human Rights Watch promoting Palestinian propaganda does not square with the research and advocacy that the organization conducts to challenge violations of human rights and international humanitarian law by all actors in the region, including the Palestinian Authority and the Hamas government in Gaza. Last year, in addition to criticizing violations by the Israeli government, Human Rights Watch reported on arbitrary detention of journalists and activists by the Palestinian Authority and Hamas, an extrajudicial execution carried out by Hamas’s military wing, a Jerusalem bus bombing by an apparent member of Hamas, and executions by Hamas authorities in Gaza.

Human Rights Watch is an independent, international, nongovernmental organization that promotes respect for human rights and international law. It monitors rights violations in more than 90 countries across the world. Human Rights Watch in 1997 shared in the Nobel Peace Prize as a founding member of the International Campaign to Ban Landmines. To accomplish its mission, Human Rights Watch relies on rigorous research from professional researchers on the ground and regular engagement with government officials, as well as others with first-hand information.

Human Rights Watch works on all 19 countries in the Middle East and North Africa. In the last year, Human Rights Watch documented ISIS abuses including sexual violence, rape, and torture, chemical weapons attacks by Syrian government forces in Aleppo, Saudi Arabia’s male guardianship system, torture in Egypt, Saudi-led coalition airstrikes in Yemen that killed civilians, and executions in Iran, among many other issues. The Israeli media often covers these reports.

Human Rights Watch applied to the Population and Immigration Authority, within Israel’s Ministry of Interior, on July 14, 2016, for a work permit on behalf of Shakir, a United States citizen. While Interior Ministry regulations provide that a decision should be provided within 60 days, Human Rights Watch did not receive a reply until February 20, 2017. Human Rights Watch has retained counsel and intends to challenge the decision before an Israeli district court.

“The Israeli government is hardly the only one to disagree with our well-researched findings, but efforts to stifle the messenger signal that it has no appetite for serious scrutiny of its human rights record,” Levine said. “We hope the Israeli authorities will reverse this decision and allow both international and domestic human rights groups to work freely.”