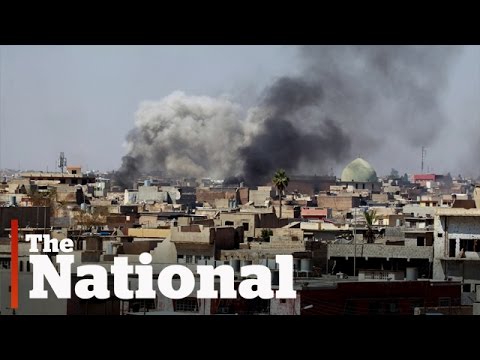 Candidate Donald Trump called last year for carpet-bombing of Daesh (ISIS, ISIL) in Iraq and Syria. It is possible that Trump has loosened the rules of engagement for the US Air Force, which is providing air support to the Iraqi Army. Looser rules could well be producing more casualties.

This allegation is supported by an NYT piece today that quotes and Iraqi officer to this effect:

After airstrikes killing as many as 200 civilians, Iraqi officer says rules of engagement relaxed under Trump. https://t.co/fNhYV8XXG6 pic.twitter.com/KYotZcYkY3

Dubai’s al-Khaleej reports that after a US airstrike on West Mosul on Thursday that is alleged to have killed over 200 innocent civilians, the Iraqi Army has paused its campaign to take the rest of the Western part of the city. That is, Trump may actually have hamstrung the anti-Daesh fight by policies that led to a civilian massacre from the air.

Old Mosul is densely populated and it is possible that Daesh (ISIS, ISIL) still has some 300,000 people there under its sway. The Iraqi army and the US-coalition are attempting to dislodge Daesh, but never called for a civilian exodus. Hence, civilians are caught in the crossfire.

The US military admitted to carrying out the deadly strike, but were careful to underline that it had been called for by the Iraqi Army. Trump’s war strategy seems to be so unsuccessful that the US Air Force is trying to pass the blame for it off onto the Iraqi Army!

The Mosul judicial council has called for declaring Mosul a disaster zone. The judges added,

“The indiscriminate strikes on West Mosul by the fighter jets of the coalition must cease.”

They called for a review of military planning for Mosul. They noted that they had been calling since Thursday for civil defense units to help with saving civilians. The coalition planes had been trying to hit three houses used by Daesh.

The National: “In Mosul, steaming ahead could imperil civilian lives”