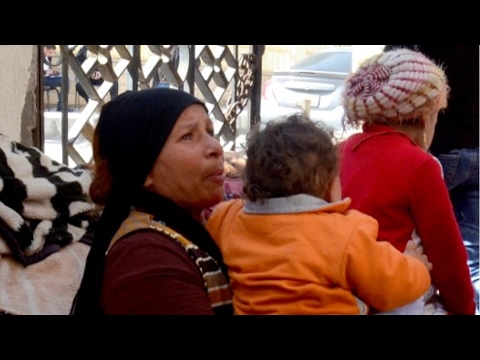 Several hundred Egyptian Christians have fled their homes in North Sinai over the last few days following a series of murders attributed to supporters of the so-called Islamic State.

Since the end of January at least seven people have been attacked and killed in the provincial capital, El Arish. Five were shot, one was beheaded, and one burnt to death.

Other Christians in the area say they have received threats by mobile phone and “death lists” have been circulated online. A video issued last week by a local IS affiliate vowed to step up attacks, describing the Christians as “infidels” empowering the West against Muslims.

The authorities have been battling against jihadists in northern Sinai for several years but with limited success. A statement from President Sisi’s office on Thursday said he has now given orders to “completely eradicate” them.

Although Sinai is a special case and the killings there have been particularly terrifying for Christian residents, sectarian conflict elsewhere in Egypt is not uncommon. Last December the bombing of a Coptic cathedral in Cairo left 25 dead. Country-wide, the Eshhad website has documented almost 500 incidents of various kinds since mid-2012. Besides violence against people they include attacks on homes and churches.

The automatic response of the authorities to such attacks is to try to restore calm as quickly as possible, but that can only be a short-term fix. Successive Egyptian governments have been reluctant to confront the underlying problem of religious discrimination. That is not very surprising because the state itself institutionalises discrimination to some extent – which in turn tends to legitimise discriminatory actions by individuals.

Commenting on the the cathedral bombing in December, Timothy Kaldas, a visiting professor at Nile University in Cairo, wrote:

“While the vast majority of Egyptians rightfully condemns the murder of 25 worshippers at Sunday mass, other beliefs are pervasive, beliefs that perpetuate sectarianism throughout society and have been behind a majority of the violent sectarian attacks throughout the country. A majority of the country does not even accept that Christian citizens should have the right to build houses of worship as easily as Muslims can build mosques …

“The church building law passed in September maintains a set of rules and regulations for any sort of renovation and construction of a Christian house of worship, rules that mosques do not have to comply with. The different standards – and in the case of Christians, the more restrictive standards – drive structural and state-sanctioned inequality …

“When the state sets sectarianism as its example, it’s hardly surprising that society follows suit. Indeed, sectarian laws surrounding church building have been used as a pretext by vigilantes in rural areas to justify their attacks on Christian places of worship, whether they are private homes used to host prayers or churches seeking to renovate or repair their premises. Attackers often cite the restrictions on church building when defending their actions. The perpetrators frequently escape criminal prosecution, through either the use of reconciliation councils or through overall impunity.”

Reconciliation councils – often used as part of the “calming” process after an incident – tend to favour the Muslim majority, often perpetuate injustices rather than resolving them and sometimes make rulings that are contrary to Egyptian law. A report by the Egyptian Initiative for Personal Rights in 2015 described them as “a major factor contributing to the recurrence of sectarian attacks”.

Coupled with that are perceptions that the authorities do too little to protect Christians under threat and/or fail to take robust action against attackers. The most recent report on religious freedom in Egypt the US State Department noted:

“The government frequently failed to prevent, investigate, or prosecute crimes targeting members of religious minority groups, which fostered a climate of impunity, according to a prominent local rights organisation. The government often failed to protect Christians targeted by kidnappings and extortion according to sources in the Christian community, and there were reports that security and police officials sometimes failed to respond to these crimes, especially in Upper Egypt.”

There are also less conspicuous forms of discrimination. Christians in Egypt are thought to account for about 10% of the population but are clearly under-represented in some key areas. The State Department ‘s report said:

“Only Muslims could study at Al-Azhar University, a publicly funded institution. Additionally, the government barred non-Muslims from employment in public university training programs for Arabic language teachers because the curriculum involves study of the Quran.

Sectarianism in Egypt is unlikely to decline unless the government takes a clear lead in combating discrimination but that is probably too much to expect so long as the government remains complicit.