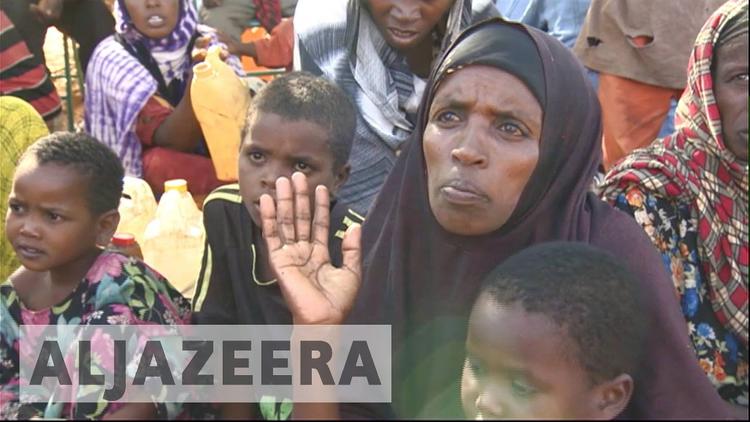 The Watchers : Watching the World Evolve and Transform | – –

110 people have died from hunger in the past 48 hours in just one region of Somalia as severe drought gripped the country, causing hunger crisis. The death toll was announced by prime minister Hassan Ali Khaire today and it comes from the Bay region in the southwest part of the country alone. Humanitarian agencies report worrying similarities to the 2011 famine, in which nearly 260 000 Somalis lost their lives. Somali elders say they have never seen drought as severe as this one.

On Tuesday, February 28, 2017, just a week after his inauguration, President Mohamed Abdullahi Farmajo has declared the drought a national disaster. The declaration comes amid an ongoing war with al-Shabab and is expected to be a trial for all those involved in Somalia’s struggles. It will test the international community’s response, the government’s ability to assist, and the strength of security provided by the African Union forces, Al Jazeera explains.

In the far north of Somalia, three years with little rain has had increasingly disastrous effects for a population reliant on the land. The parched earth has failed to produce food for the camels and goats that the people depend on for their income, meat, and milk for their children.

Critical health services are needed for 1.5 million people currently affected by drought conditions and a worsening food crisis, according to the WHO.

The humanitarian situation in Somalia continues to deteriorate, the organization said, and there is a high risk that the country will face its third famine in 25 years. More than 6.2 million people – half of the total population – are in urgent need of humanitarian aid, including almost 3 million facing a food security crisis. Nearly 5.5 million people are at risk of contracting waterborne diseases, more than half of whom are women and children under 5 years of age.

Acute drought in many parts of Somalia has reduced the availability of clean water sources, and the food crisis has given way to malnutrition. More than 363 000 acutely malnourished children and 70 000 severely malnourished children are in need of urgent and life-saving support, it said. According to United Nations estimates, if the current situation food and security continues, these numbers are estimated to double in 2017.

Drought conditions have also increased the spread of epidemic-prone diseases such as acute watery diarrhea, cholera, and measles. In the first 7 weeks of 2017, over 6 000 cases and 65 deaths by acute watery diarrhea/ cholera have been reported, and a total of 2 578 cases of suspected measles were reported as of September 2016.

“Somalia is now at a critical point as a result of this drought and environmental hazards and lack of basic services,” said WHO Regional Director for the Eastern Mediterranean Dr. Mahmoud Fikri.

“We named this (2017) drought ‘Odi Kawayn,’ which is Somali for ‘something bigger than the elders.’ None of our elders has ever seen a drought as severe as this one,” said drought victim Halima, as reported by the International Organization for Migration.

Somalia, however, is not the only African country currently dealing with severe hunger crisis, Ethiopia and Kenya are too.

These three countries in the Horn of Africa are currently suffering a severe drought that is threatening the lives of more than 11 million people.

“Unfortunately, the international community is responding very reluctantly. People don’t have any reserves left, as in recent years their harvests have failed and animals died because of the lack of water and fodder. Every donation helps us save lives,” said Till Wahnbaeck, Welthungerhilfe chief executive officer.

According to UN figures, more than 20 million people in Africa are dependent on humanitarian assistance for survival.