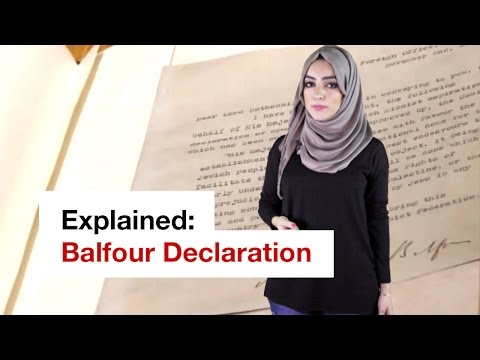 The centennial of the Balfour Declaration is upon us. Accordingly, we think it is time the British Government revisited the document that helped determine the course of history.

When it was apparent in 1917 that Britain would gain control of Palestine after the first World War, Zionist leaders requested the following declaration:

“Edwin Montagu, the only Jew in the British Cabinet, was strongly opposed to Zionism. He suggested that the ‘reconstitution of Palestine as the national home of the Jewish people’ implied that Muslims and Christians were to make way for the Jews, who would be put in all positions of preference.” The final draft of the Balfour Declaration encapsulated this view:

“‘His Majesty’s government view with favour the establishment in Palestine of a national home for the Jewish people, and will use their best endeavours to facilitate the achievement of this object, it being clearly understood that nothing shall be done which may prejudice the civil and religious rights of existing non-Jewish communities in Palestine, or the rights and political status enjoyed by Jews in any other country.’

The three key changes from the Zionist request to the final Declaration are quite illuminating and apply to this day.

First, the establishment of a national home “in” Palestine implies part of the territory, not all of it as the requested draft “Palestine should be reconstituted as the national home of the Jewish people” would imply. Clearly Great Britain was not condoning the takeover of all of Palestine as has been the case for the past 50 years. [See Fincham.]

Second, the change from “secure” to “facilitate” in “His Majesty’s Government” will “use their best endeavours to facilitate the achievement of this object” perhaps implies that Great Britain would do their best to make this a goal, but it was not a guaranty. In other words, the British Government has never unconditionally promised to support the Zionist endeavor. [See Fincham.]

Third, and perhaps most importantly, is the condition presented to the Zionists. Note the clause specifically added to the final version “it being clearly understood that nothing shall be done which may prejudice the civil and religious rights of existing non-Jewish communities in Palestine.” Clearly the British in their foresight made a priority of Palestinians having equal rights in their homeland.

Therefore, setting aside the question of whether any nation has the right to dictate who may use any part of another people’s homeland for a third, non-indigenous group, let us examine the history of Palestine since the British ended their presence.

Israeli Historians such as Benny Morris, Ilan Pappe, Avi Shlaim and others have now established as fact the Israeli Ethnic Cleansing of Palestine in 1947-8. Thereafter, again in violation of international law, the Israelis refused Palestinian refugees the right of return at the end of hostilities. Further, the Israelis purposefully destroyed 601 Palestinian villages and towns to make sure that any Palestinians who were able to get past the Israeli security forces had nothing to which they could return.

The Palestinians who remained in Israel and who were not further intimidated into leaving have lived in an Apartheid state ever since. For the first 2 decades Palestinians lived under military law and thereafter as “Arab-Israelis” with different rights and privileges than Jewish Israelis. For example, Israel has created over 600 new Jewish municipalities since 1948. The total of new Palestinian municipalities is zero.

In 1967, Israel initiated a war with Egypt, Jordan and Syria. Supposedly a defensive maneuver, Israeli archives reveal that the IDF Chiefs of Staff realized there was no threat from the Egyptian forces mobilizing in the Sinai Peninsula. In fact, the Chiefs of Staff identified that the Egyptians were not ready for war and thus the situation provided an opportunity, not a threat. They convinced the reluctant civilian government to approve the initiation of war and thus captured East Jerusalem, the West Bank, the Gaza Strip and the Golan Heights in six days. The generals believed they had completed the job of 1948.

Immediately thereafter, Israel violated another international law by transferring populations to territories taken by war. On the 100th anniversary of the Balfour Declaration, the Israelis will be entering their 51st year of violating Article 49 of the Fourth Geneva Convention. Indeed when Israel claims the United Nations is guilty of bias and anti-Semitism against it, it willfully ignores that so many of the votes apply to this half century of violating international law.

Note that this ongoing violation is commonly referred to as the Occupation of the Palestinian Territories. Yet that does not accurately reflect the situation. An occupation, such as that of the Allies after WWII, denotes a military presence post hostilities that will eventually be removed. What the Israelis have done is expanded beyond their internationally-recognized borders to colonize these territories. This expansion and colonization, along with its control and disproportionate distribution of the resources of these territories, continues through this day.

Further, by the time of the Balfour Centennial, Israel will have entered into its second decade of a siege of Gaza. With a compliant Egypt having sealed the border crossing, Gaza is entirely dependent on Israel for all resources coming into the territory and all trade that is allowed out. Indeed at one point, Israel put Gaza “on a diet,” purposefully limiting the number of calories entering the territory to just above malnutrition. Gaza has neither a commercial port, nor an airport, and therefore all goods must come through Israel. Further, Gaza is ringed by guard towers with manned and unmanned outposts that frequently fire into the territory, even at farmers in their fields on the Palestinian side of the border walls. The Israeli Navy enforces a 3 to 6 nautical mile maritime zone hampering the Gazans’s ability to feed itself with more vibrant fishing areas. In addition, the Israeli Navy frequently fires on unarmed Gazan fishing boats too. As if these weren’t enough limitations on Gaza’s ability to feed itself, Israel admits spraying herbicides inside the Gaza Strip too.

Not content with the suffering Israel causes in Gaza, Israeli periodically launches massive attacks against a defenseless population. Utilizing F-16 fighter jets, attack helicopters, tanks and heavy artillery against Gaza’s defenses of AK-47s, RPGs and ineffective homemade rockets, Israel has massacred Palestinians and destroyed housing and infrastructure. Operation Protection Edge of 2014 alone killed 2,251 Palestinians including 1,462 civilians, of which 551 were children (according to the UN). 18,000 housing units were destroyed in whole or in part, most of which have not been rebuilt as Israel has not allowed the supplies to arrive. Infrastructure including Gaza’s power plant were targeted and destroyed. Refuges centers were also targeted. The town of Shuja’iyya was leveled by artillery fire after 30 Israeli soldiers were killed. Members of Breaking the Silence, consisting of former Israeli soldiers, have testified to the commission of war crimes during the massacre.

Israel’s reign of death and destruction on Gaza can be summarized by the IDF’s Dahiya Doctrine. Quoting Maj. Gen. Gadi Eizenkot, who went on to become the Chief of the IDF General Staff,

“What happened in the Dahiya quarter of Beirut in 2006 will happen in every village from which Israel is fired on. […] We will apply disproportionate force on it and cause great damage and destruction there. From our standpoint, these are not civilian villages, they are military bases.”

In short, Israel commits collective punishment against civilian populations as a matter of policy. Yet another war crime. In the case of Gaza of 2014, the target was a defenseless, open-air prison that today contains 2 million people.

Can anyone realistically say “nothing” has been “done which may prejudice the civil and religious rights of existing non-Jewish communities in Palestine?” It is time that British Government has declared that Israel has never lived up to the revered Balfour Declaration and rescind it once and for all. For if Great Britain believes in human rights and democracy, it will demand that Israel recognize the right of Palestinian refugees and their offspring to return home and to live as equal citizens under a representative government.

– – – – – –
Ian Berman is an entrepreneur and former corporate banker at leading global banks in New York City. He now focuses on renewable energy, financial advisory services and writing about representative government, equitable public policies and ending American militarism and Israel’s continuing colonization of Palestine. He is the Co-Founder of Palestine 365, the Ongoing Oppression and its predecessor, Palestine 365, on Facebook.