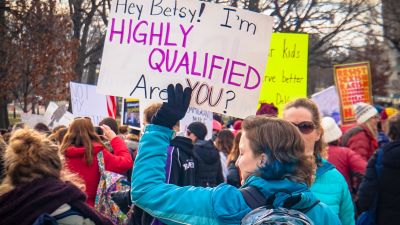 “Lenin wanted to destroy the state, and that’s my goal too. I want to bring everything crashing down, and destroy all of today’s establishment.— Steve Bannon to historian Ron Radosh on Nov. 12, 2013 (according to Radosh)

Through key Cabinet appointments, Trump is gutting federal agencies that have improved citizens’ daily lives in ways that most Americans will no longer take for granted.

Beware of the enemy within. With respect to the US government, the ultimate inside job is well underway. Through key Cabinet appointments, Trump is gutting federal agencies that have improved citizens’ daily lives in ways that most Americans will no longer take for granted.

In her confirmation hearing, billionaire Betsy DeVos made the world painfully aware that she isn’t an educator or expert in curriculum. She’s not familiar with the decades-old Individuals with Disabilities Act, or the fraudulent for-profit colleges and graduate schools that exploit their students. She seems unconcerned about the funding crisis that confronts public education in America. But she has all of the credentials required to serve in the Trump administration: She’s a billionaire with a mission to destroy the federal department she now heads.

Keeping Trump controversies in the family, DeVos’ brother Erik Prince is the founder of the infamous Blackwater private security firm and was a $250,000 donor to the Trump campaign. In January, Prince met secretly in the Seychelles Islands with a Russian close to Putin. Russia’s goal in the meeting, according to The Washington Post, was to establish a back-channel line of communication with the Trump administration.

As a lobbyist through her organization — the nonprofit American Federation for Children — DeVos led the effort to privatize public education in Michigan. The result: widespread abuses, dismal performance and no accountability for taxpayer funds flowing into the coffers of for-profit charter schools and management companies. In Michigan, DeVos helped to create a system that “leads the nation in the number of schools operated for profit, while other states have moved to curb the expansion of for-profit charters, or banned them outright,” the Detroit Free Press observes. “[Michigan is] a laughingstock in national education circles, and a pariah among reputable charter school operators, who have not opened schools in Detroit because of the wild West nature of the educational landscape here.”

Likewise, the Obama administration put pressure on for-profit colleges that exploit students and leave them burdened with debt. Trump, on the other hand, promised to reduce government intrusions and allow schools like Trump University to thrive. After Nov. 8, the stock of for-profit schools soared. DeVos is now fulfilling Trump’s campaign promises.

[S]he has all of the credentials required to serve in the Trump administration: She’s a billionaire with a mission to destroy the federal department she now heads.

Among her advisers is Robert S. Eitel, a lawyer on unpaid leave of absence from his job at Bridgepoint Education, Inc. Bridgepoint, a for-profit college operator whose stock is up 40 percent since Nov. 9, faces multiple government investigations. One ended recently in a $30 million settlement with the federal Consumer Finance Protection Bureau over deceptive student lending.

Tom Price is an orthopedic surgeon who seems to have forgotten his profession’s seminal creed, “First, do no harm.” As a Georgia congressman, Price was among the most prominent critics of Obamacare, which has provided more than 20 million citizens with health insurance that they otherwise would not have. As the Secretary of Health and Human Services, he is now working to dismantle the Affordable Care Act.

On March 7, Price wrote Congress to express support for the Republican repeal effort. By then, Trump’s campaign promise of “health insurance for all” had devolved into Rep. Paul Ryan’s notion of “universal access” in the form of subsidies that would cover only a fraction of the premium cost for those most in need. (But it did have a nice tax break for the wealthy.) The Congressional Budget Office estimated that under the Ryan/Trump/Price plan, 14 million Americans would lose coverage immediately; by 2026, the total would rise to 24 million.

Trump, Price and Ryan failed in their first assault on the Affordable Care Act, but they’ll be back. Watch for Price to issue rules and regulations that try to push Obamacare over a cliff. He’ll work at accomplishing administratively what Trump and Ryan could not achieve legislatively. Meanwhile, they and fellow Trump Party members push false narratives about “exploding premiums” when only 3 percent of Americans experience the individual rate increases they cite. They talk about Obamacare’s “implosion” due to insurers are leaving markets, but don’t mention that the Republicans — especially Sen. Marco Rubio — sabotaged the “risk corridor” program that reimbursed insurer losses for high-risk citizens. And they don’t acknowledge the latest studies showing that their “death spiral” rhetoric is simply a lie — unless Trump’s policies make it happen.

The Trump/Price impact on women’s health issues is becoming clear. On April 13, Trump signed a law aimed at eliminating federal funding for Planned Parenthood (after Vice President Mike Pence had cast the tie-breaking vote in the Senate). As for medical research, forget it. Trump’s proposed budget would cut HHS funding (and its National Institutes of Health) by almost 20 percent.

Jeff Sessions is just the person to send the federal agency charged with the pursuit of justice on a one-way ride back to a time of unspeakable injustice. In 1985 he led the prosecution of three African-American voter rights activists for voter fraud. As the US attorney for the southern district of Alabama, Sessions lost that case. Ruling that his theory was contrary to election law and the Constitution, the judge threw out many of the counts and a jury acquitted the defendants of everything else. A year later, even the Republican-controlled Senate considered Sessions too racist to become a federal judge after President Reagan nominated him.

In December 2016, a Trump transition team member told The New York Times that if Sessions had it to do over, he’d bring the 1985 voter rights case again. In his January 2017 confirmation hearing, he echoed that sentiment in response to Sen. Al Franken’s questions about Trump’s bogus voter fraud claims about millions of illegal votes for Hillary Clinton. Sessions equivocated, but the “voter fraud” mantra has now become an excuse for a new round of voter suppression efforts.

Once confirmed, Sessions went to work quickly on his mission to turn back the clock. On Feb. 22, his department coordinated with Devos’ to rescind the Obama administration’s restroom rule protecting transgender students. Shortly thereafter, the US Supreme Court reversed its earlier decision to hear a case on transgender rights and returned it to the lower courts in light of the Trump administration’s new guidance.

On Feb. 23, Sessions issued a memo reversing the Obama administration’s directive to phase out privately run prisons. Obama’s order had come after a scathing government audit highlighting safety and security problems in private prisons. Sessions’s move was good news for the corporations that run those institutions, which have been reliable Republican campaign donors.

On Feb. 27, the Department of Justice reversed the Obama administration’s six-year challenge to Texas’ voter-ID law. In 2016, a federal appeals court had ruled that the law discriminated against minority voters. But under Sessions, the Justice Department did a 180-degree about-face.

On March 17, the Justice Department filed a brief seeking to restructure the Consumer Financial Protection Bureau, which secured a $30 million settlement against for-profit college operator Bridgepoint (the same firm whose chief compliance officer is now on unpaid leave as a Betsy DeVos adviser). Trump now seeks unrestricted power to fire the CFPB director.

On March 31, Sessions ordered a review of all reform agreements with troubled police departments nationwide. The Justice Department’s former chief of special litigation, which oversaw investigations into 23 police departments including New Orleans, Cleveland, and Ferguson, Missouri, called Sessions’ announcement “terrifying” because it raised “the question of whether, under the current attorney general, the Department of Justice is going to walk away from its obligation to ensure that law enforcement across the country is following the Constitution.”

On April 11, Sessions declared the dawn of “the Trump era” in immigration. In addition his earlier threat to deprive sanctuary cities of federal funds, he has ordered the hiring of “border security coordinators” for all 94 US attorneys offices, emphasized deportation for non-violent offenses, and promised a surge in the appointment of immigration judges to accelerate the flow of immigrants out of the country. Never mind that fewer than 3 percent of the undocumented have committed felonies — less than the 6 percent for the overall population.

Steven Harper blogs at The Belly of the Beast, is an adjunct professor at Northwestern University, and contributes regularly to The American Lawyer. He is the author of several books, including The Lawyer Bubble — A Profession in Crisis and Crossing Hoffa — A Teamster’s Story (a Chicago Tribune “Best Book of the Year”). Follow him on Twitter: @StevenJHarper1.

Thom Hartmann: “How Is Trump’s Cabinet Screwing You This Week to Enrich Themselves?”