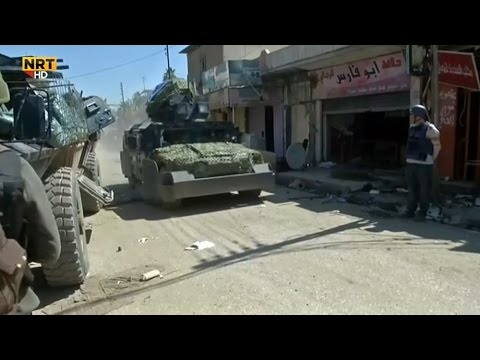 While Iraqi forces battle the Islamic State in west Mosul, intelligence services work in the east, to hunt down former members of the group. But those detained say the arrests are random and unjust.

A few hours after the Iraqi army announced that the eastern side of Mosul had been recaptured and members of the extremist group known as the Islamic State had been driven out, a new military force entered the city. The members of this group wear masks, carry only light weapons and they have laptops with them. They are members of Iraq’s National Security Service, a primarily intelligence gathering unit rather than a fighting force, and they are on the hunt for members of the Islamic State, or IS, group who may now be hiding among the civilian population of the city.

This is not an easy task given the hundreds of thousands of non-combatants that remained on the eastern side of the city while fighting was going on, and who remain there to this day.

Every day dozens more detainees arrive. I knew some of them and I knew they were innocent. I think these arrests are being carried out in a random way; nobody is following any rules at all.

“Over the past two months there has not been a single day when we have not arrested members of the IS group, or collaborators,” says Alaa al-Zaidi, one of the men serving in the National Security Service, or NSS. “But it’s really hard and it’s like trying to find a needle in a haystack.”

When the Iraqi military entered the eastern side of Mosul, the foreign fighters with the IS group fled across the Tigris river into the western side of the city, where fighting still rages. But the Iraqi fighters could hide among the locals, al-Zaidi explains. “They shaved their beards and got rid of any signs that they were IS. Some of them even went out onto the street to celebrate the Iraqi soldiers’ arrival. But in fact they are criminals responsible for the deaths of dozens of Mosul’s residents,” al-Zaidi continued. “Some of them are still supporting the IS group, or starting up a new set of sleeper cells in the city.”

Indeed, only a few weeks after the Iraqi military announced that the IS group had been pushed out of eastern Mosul there were several suicide bomb attacks targeting restaurants and markets on that side of the city. The attacks happened despite the presence of thousands of soldiers and police in Mosul.

The NSS’ main problem is a lack of information, given that Mosul has been an information black hole since the IS group took over. Additionally, the IS group killed or otherwise targeted many of the city’s former police officers and soldiers, which meant that hardly any security information has leaked out of the city.

“The NSS has now recruited a number of residents who stayed in the city, and asked them to act as informants,” al-Zaidi explained. “They even accompany the security forces when they do raids, looking for disguised IS members, or IS fighters in hiding. But they usually cover their faces with a scarf so that they cannot be identified. They are concerned about revenge,” the NSS member explained.

The NSS has also set up a special phone number that residents can call and give information on extremists who may have snuck back into their neighbourhoods. As yet, the response has been limited, al-Zaidi admits. “Perhaps people are afraid of getting involved, or they are worried about reprisals from extremists,” he suggests.

While the NSS may have a legitimate job to do, reports from some of the Mosul locals who were arrested on suspicion of IS membership are far from glowing.

One of these, Waleed al-Jibouri*, a resident of the Karamah neighbourhood in eastern Mosul, spoke to NIQASH on the phone from the displaced persons camp where he and his family now reside. Al-Jibouri was arrested by the NSS on suspicion of IS membership and taken to a detention centre south of Mosul and interrogated. He was eventually able to prove that he had not collaborated with the IS group and released.

An NSS member stands by graffiti that tells locals to call this number if they suspect an IS member is hiding in their neighbourhood. Source: NSS

“The situation in eastern Mosul is so frightening right now. It is chaotic and people are taking revenge on one another,” al-Jibouri said. “Some informant told the Iraqi army that I had collaborated with the extremists. The IS group killed my brother, a police officer, and they also whipped me for smoking. Why would they work with me? They would not trust me!”

Al-Jibouri also says that the NSS move around the city accompanied by fighters from the Shiite Muslim militias, who are often provocative, he says. They carry their own flags and drive around the city in SUVs, blasting Shiite religious music – anathema to a Sunni Muslim-majority town.

Al-Jibouri spent two weeks in detention centres south of the city before he was released. “The detention centre conditions are very bad and every day dozens more detainees arrive,” he said. “I knew some of them and I knew they were innocent. I think these arrests are being carried out in a random and unconstructive way; nobody is following any rules at all.”

After he was arrested, al-Jibouri left Mosul with his family, having decided he would rather live in a displaced persons camps.

“The investigating officers don’t take into account the fact that many residents were forced to work with the IS group, in civil jobs,” adds Qasim al-Obaidi*, who was also held in detention for several days before clearing his name. “Many people were forced to work with the IS group or starve to death, along with their families. They were cleaning the streets or collecting garbage or fixing water pipes. And now they are considered just as bad as those IS members who killed others. That is not fair.”

The NSS is not just limited to hunting out former IS members in Mosul. They are also searching for the extremists’ various headquarters and trying to locate bomb-making factories. Last week, the NSS announced they were able to find a large factory for the making of improvised explosive devices hidden in one of Mosul’s suburbs.

The NSS is also responsible for all of the digital material and paperwork that is found, that has been left behind by the IS group.

“We have found thousands of items of correspondence in the city,” a lieutenant in the Iraqi army, Omran al-Khazaei, told NIQASH. “These are very important because the IS group was managing all of its affairs in Iraq and Syria from Mosul.”

A few days ago pro-government forces found around 3,000 important documents in the Muthanna neighbourhood of Mosul, he continued. There were CDs, laptops and printed documents, all of which have the names of thousands of IS members in Iraq and Syria, their addresses and nationalities as well as financial records on the organisation’s commercial activities.”

Al-Khazaei says the information has been sent to Baghdad where it will take months to analyse them fully.

Members of a Christian militia arrest suspected IS fighters in Mosul. Source: NSS

*Names of those arrested in Mosul have been changed, for security reasons.