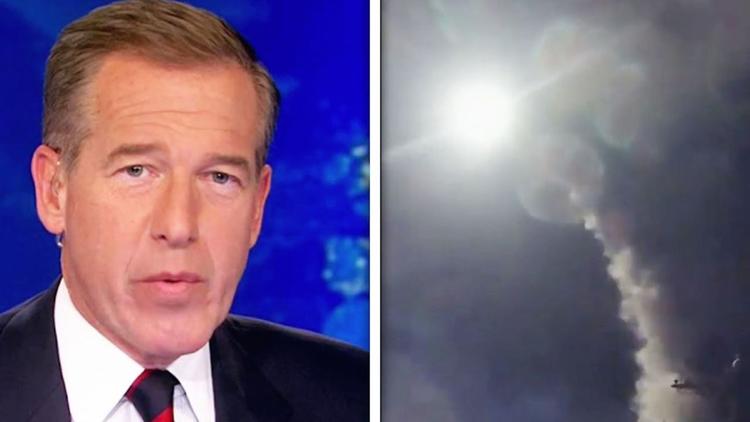 According to DC pundits, Trump was a dangerous maniac…until he started bombing?’

“We see these beautiful pictures at night from the decks of these two Navy vessels in the eastern Mediterranean,” Brian Williams said, describing footage of the U.S. missile strike. “I am tempted to quote the great Leonard Cohen: ‘I’m guided by the beauty of our weapons.'”

Corporate media and D.C. politicians on both sides of the aisle are falling over themselves to shower praise on President Donald Trump for unilaterally bombing a Syrian air base on Thursday, demonstrating that Washington’s hunger for war continues no matter who is at the controls.

Some talking heads’ praise for the new war effort has been so over-the-top that it alarmed viewers, as when NBC‘s Brian Williams called the launch of 59 Tomahawk missiles—which state media now reports have killed civilians, including children—”beautiful” no less than three times in 30 seconds. Williams even misguidedly quoted a Leonard Cohen lyric to gush over the strike.

Brian Williams refers to this Pentagon video of missiles going to kill people as “beautiful” 3 times in 30 seconds pic.twitter.com/KBb3tP8qHT

The critical reaction on social media was swift:

The saddest thing here is Brian Williams is probably not lying this time. He likely thinks missile strikes are beautiful. https://t.co/11XnE4EbjO

Ike said that the influence of mil-industrial complex was spiritual as much as political, it corrodes the soulhttps://t.co/Gy6rY8CJlQ

And Williams was far from alone in his over-the-top praise for Trump’s bombing. The Intercept‘s Lee Fang collected clips of pundits showering praise on Trump:

On Fox and Friends, analyst says missile strike shows Trump is both like Robocop and “the new Sheriff in town” a la spaghetti western pic.twitter.com/tjoII746OE

Print journalists jumped at the chance to beat the war drums, too, framing Trump’s decision to bomb Syria as an emotional, heartfelt, and moral one.

The Washington Post‘s David Ignatius claimed that it was evidence that “the moral dimensions of leadership” had penetrated Trump’s Oval Office. And in a New York Times op-ed titled “On Syria Attack, Trump’s Heart Came First,” White House correspondent Mark Landler framed the bombing as “an emotional act by a man suddenly aware that the world’s problems were now his—and that turning away, to him, was not an option.”

Readers swiftly pointed out the hypocrisy of Trump’s supposed sympathy for Syrian war victims, whom he barred from entering the U.S. in one of his first acts as president:

I seriously can’t with this NYT headline. pic.twitter.com/gMnQN77V50

Many Congressional Democrats joined neoconservatives in offering immediate praise for the bombing. As Kevin Gosztola of ShadowProof observed:

Chuck Schumer, the Democratic Senate minority leader, proclaimed, “Making sure Assad knows that when he commits such despicable atrocities he will pay a price is the right thing to do.” Even Democratic Senator Dick Durbin declared, “My preliminary briefing by the White House indicated that this was a measured response to the Syrian nerve gas atrocity.”

Prior to the attack, neoconservative Elliott Abrams, a former official in President George W. Bush’s administration, said, “Obama did nothing at all year after year to save the lives of Syrians. Now Trump has to match his rhetoric with something concrete.”

Indeed, leftist pundits pointed out that when it comes to war, both sides of the partisan aisle appear ideologically united:

It’s not a matter of spine, it is that Trump and Schumer share the same ideologies https://t.co/yfzaSUJsgw

Many anti-war voices lamented the immediate approval from all sides for war, and expressed surprise that the praise is coming from even avid Trump critics:

I knew that I’d wake up to find a bunch of people praising Trump but I still wasn’t ready for it. This fucking sucks

Let me get this straight: so according to DC pundits, Trump was a dangerous maniac…until he started bombing?

Others compared it to the lead-up to the still ongoing Iraq war, when the media united with Washington politicians to push for President George W. Bush’s “preemptive war.”

Some also speculated that the United States’ economic ties to military contractors may play a role in the never-ending push for endless war, while stock prices for the company that manufactures Tomahawk missiles rose immediately following the attack.