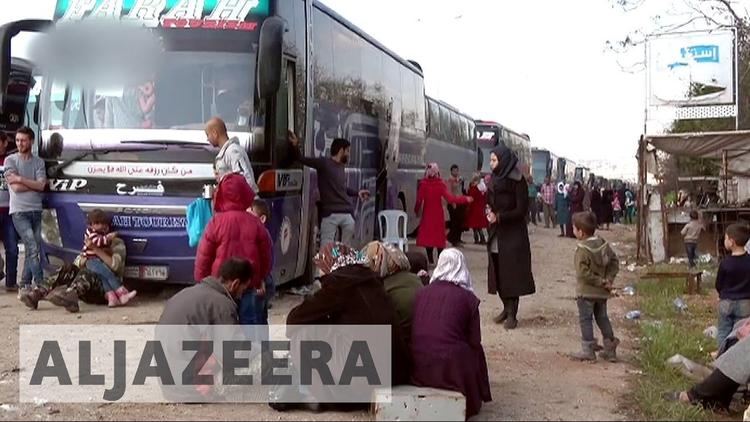 Someone detonated a car bomb in the (rebel-held) Rashideen district of Aleppo Province Friday night, killing over 100 and wounding over 500. It targeted lead buses that had brought in evacuees from two Shiite villages being evacuated because their sectarian complexion makes them sitting ducks in the civil war. Sunni extremists are being sent north to Idlib and Shiites will be sent south to take over the evacuated formerly Sunni lands.

The Shiites from Kefraya and al-Foua, then, were on their way down south, having been swapped out for Sunni villages on Lebanon’s border (Madaya and Zabadani) where Salafi Jihadi extremists– Syria’s al-Qaeda affiliate and its close ally the Freemen of Syria– had been starved by the regime (along with women, children and other noncombatants.) The population exchange is controversial because it seems to involve acquiescing in a logic of ethnic cleansing contrary to the values of the nation.

The Saudi press and pro-rebel outlets are trying to blame the bombing on the regime. But since the regime of Bashar al-Assad negotiated this swap with the Qatari government, it is difficult to see the motive for reneging. The people who regularly blow things up with suicide bombings are the al-Qaeda affiliate and its close allies. That is not a government m.o.

Population transfer, like partitioning countries, always occurs to dictatorial or colonial regimes in the midst of civil wars.

Partition seldom works. India and Pakistan were partitioned but went on fighting one another, resulting in 3 major conventional wars and then almost a nuclear exchange in 2002.

As for population transfer, it can save individual lives but no one should doubt that it is hugely disruptive, and creates long-term enmities that do more harm than good. Ben Gurion’s population exchange beginning in 1948 has left millions of Palestinians stateless and homeless, without rights or even the right to have rights.

Syria would do better to foster political compromise. Then you would not have to move anyone around. The sanguinary bombings this weekend clearly demonstrate that top-down ethnic cleaning does not produce peace.