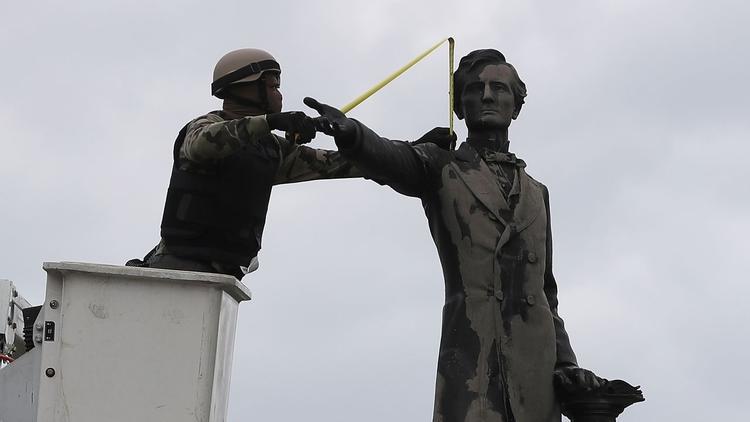 Some Southern cities are rethinking the appropriateness of keeping such emblems on public property. Not Alabama.

Alabama lawmakers on Friday approved a bill that prohibits the removal of Confederate monuments and other long-standing historical markers.

The bill, passed in both the House and Senate, prohibits “the relocation, removal, alteration, renaming, or other disturbance of any architecturally significant building, memorial building, memorial street, or monument” that have stood for more than 40 years on public property.

“It’s very important that we address this issue to protect the history that made us who we are today as a state and as a country,” the bill’s Republican sponsor Sen. Gerald Allen said. “The role that our state played in the formation of the history of this nation is very important.”

Opponents to the bill said it is disrespectful to African-Americans because it would preserve Confederate monuments and memorials related to slavery and which many people believe champion the racism of the past.

The Confederacy was made up of states that attempted to preserve slavery in the South and secede from the United States in the Civil War of 1861 to 1865.

Over the past several years, memorials to the Confederacy have fallen out of favor in some Southern places.

In 2015, Alabama’s then-Gov. Robert Bentley ordered to remove the Confederate flag from the state Capitol after the shootings in a South Carolina church killed nine African-Americans.

Allen had offered a similar legislation since then, criticizing the “politically-correct movement.”

Officials in New Orleans recently have been removing several Confederate monuments, including one of Jefferson Davis, president of the pro-slavery Confederacy and P.G.T. Beauregard, a Confederate general.

The legislation states changes to names or memorials installed between 20 and 40 years ago would need permission from a new state committee.

It would also apply to schools named to memorialize people. Such schools can’t be renamed without approval from the committee, but can relocate or make renovations.

The legislature will be sent to the desk of Governor Kay Ivey to be signed into law.

Local entities that violated the law, as determined by the attorney general, would be subject to a $25,000 fine, according to the bill.

Several House Democrats said it could stifle ongoing construction on historical places throughout the state.

“In 10 days [if Ivey signs the bill,] any construction going on would have to stop,” Rep. Dexter Grimsely said. “History is haunted in less than 10 days in Alabama.”