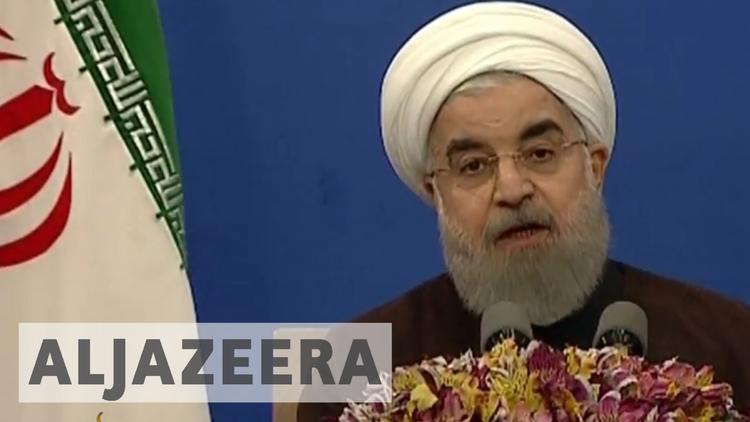 LONDON – Hassan Rouhani has won re-election as Iran’s president in a landslide, meaning that it is he who will be dealing with an antagonistic US President Donald Trump. What will their relationship mean for the 2015 international agreement that has, for now, frozen Iran’s nuclear ambitions?

The Iranian nuclear deal was the culmination of a decades-long pas de deux between the United States and post-revolutionary Iran – a push and pull, in which every step forward was seemingly followed by a step back. During US President Jimmy Carter’s administration, when the Shah fell and the US embassy staff was held hostage for more than a year, the two sides were hopelessly divided.

Under US President Ronald Reagan and his vice president and successor, George H. W. Bush, the situation was complicated further by the Iran-Contra scandal, in which senior Reagan administration officials secretly facilitated the sale of arms to Iran between 1985 and 1987, despite an arms embargo. As a result, when the relatively moderate President Akbar Hashemi Rafsanjani took power in August 1989, ended Iran’s war with Iraq, and put out feelers to the US, Bush’s hands were tied.

Rafsanjani eventually re-launched Iran’s nuclear program, with recovery from the war with Iraq facilitating progress. But it was the hardline Ayatollah Ali Khamenei, who had succeeded Ayatollah Ruhollah Khomeini as Supreme Leader in June 1989, who steered the country in that direction, by plunging relations with the US into a near-total freeze. The efforts of President Bill Clinton’s more pliable administration to bring about a thaw were repeatedly rebuffed.

Then the tables turned. When the moderate President Mohammad Khatami took office in 1997, it was the US that was headed in a more hardline direction. After the September 11, 2001, terrorist attacks on the US, President George W. Bush denounced Iran as part of what he called an “axis of evil.” And yet, by invading Iraq in 2003, the US under Bush gave Iran its greatest historical opportunity for westward expansion. In 2005, the renewed dream of Iranian regional hegemony helped bring to power President Mahmoud Ahmadinejad, who pursued the nuclear program with vigor.

In 2013, Ahmadinejad was replaced by Rouhani. With President Barack Obama already in office in the US, conditions were ripe to take a few steps forward. After nearly two years of tortuous negotiations, the agreement to halt Iran’s nuclear program, in exchange for the gradual lifting of economic sanctions, was concluded.

Opponents argued that the deal was technically flawed and would not actually prevent Iran from continuing to develop nuclear-weapons capabilities. But the International Atomic Energy Agency (IAEA) – the body empowered with verifying Iranian compliance – was convinced, and approved the deal.

Nonetheless, Trump has vowed to scrap the deal, with his advisers citing the same arguments that emerged during the ratification process. But, with the exception of Israeli Prime Minister Binyamin Netanyahu’s government and its supporters, virtually no one supports such a move.

In fact, the expectation that Iran will continue its march toward nuclear breakout ignores the entire logic and experience of nuclear non-proliferation. Even if IAEA inspectors – who have proved remarkably effective and thorough so far – could be fooled, international pressure, if not a shared interest in a safer world, gives countries a powerful incentive not to try.

Countries such as Germany or Japan have the financial and technical capabilities needed to acquire nuclear-weapons capabilities in a matter of months. Dozens of others could get there within a few years. But countries from South Africa to Argentina and even Libya have indicated that they will not take that step, by signing the Treaty on the Non-Proliferation of Nuclear Weapons (NPT). North Korea, which has so far refused to capitulate to international pressure, has paid a heavy price as global pariah, choked by economic sanctions.

For Iran, escaping economic sanctions – which are being eased only so long as it respects the deal – remains a potent motivation. Indeed, so far, Iran has kept its promises, though its leaders do have a tendency to push the limits, such as when it conducted a test of medium-range ballistic missiles in January.

Unilateral US abrogation of the agreement would not be easy. After all, the deal was the result of negotiations involving six major powers, including, unusually, China and Russia. France, Germany, and the United Kingdom – America’s principal European allies, none of which is likely to re-impose sanctions without good reason – also participated. Even Saudi Arabia, representing other Arab countries, grudgingly approved. The US Congress, initially resistant, has largely come around.

Most of the world seems to recognize that this is one of those cases where the perfect is the enemy of the good. And make no mistake: the agreement is, on the whole, a good thing. Its collapse would trigger a nuclear arms race in the world’s most unstable region.

Iran’s bitterest regional enemy, Saudi Arabia, would move rapidly toward a nuclear capability, using abundant petrodollars and Pakistani knowhow. Others – Turkey, Kuwait, Egypt, and Algeria – would not be far behind. To bet that these countries, having acquired such weapons, would behave responsibly would be a high-risk gamble.

Compounding the threat posed by US withdrawal from the nuclear deal, Iran is currently beset by uncertainty. When Rafsanjani, the patriarch of Iran’s moderate forces, died in January, his funeral was the occasion for one of the largest demonstrations in the Islamic Republic’s history. With the elderly Khamenei suffering from cancer, the battle to choose a new supreme leader is not far off.

The current dominance of the moderate faction of Khatami and Rouhani remains precarious, and their many hardline rivals – including leaders of the Revolutionary Guards, the Quds Force, and the Iranian militias – are eager to secure power. With the economy already desperately weak, the resumption of sanctions could empower the extremists.

In short, the world cannot afford the breakdown of the Iran nuclear deal. If Trump attempts to resume America’s pas de deux of the past with Iran, the result may be a dance of death.

Robert Harvey, a former member of the House of Commons Foreign Affairs Committee, is the author of Global Disorder and A Few Bloody Noses: The Realities and Mythologies of the American Revolution.