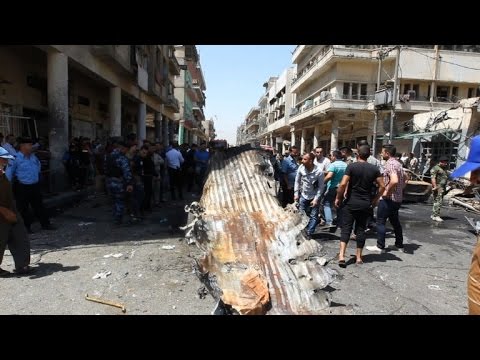 ISIL (ISIS, Daesh) lashed out at the civilian population in Iraq on Tuesday with three bombings and over 60 casualties.

With its signature warped sadism, the organization sent a suicide bomber with a truck into a crowded square in the upscale, largely Shiite shopping district of Karrada. He detonated his payload near an ice cream shop, seeking to harm children. Another attack hit the mixed Sunni-Shiite neighborhood of Karkh, while a third targeted the Sunni town of Hit in al-Anbar Province, from which it has for the most part been chased by the Iraqi army and its allies.

The bombings come as Iraqi Foreign Minister Ibrahim Ja`fari denied rumors that Baghdad was preparing to join the US, Israel and Saudi Arabia in an alliance against Iran. Ja`fari underlined that Iraq has its own independent foreign policy. In a major slight Iraqi Prime Minister Haydar al-Abadi was not invited to the 50-nation summit in Riyadh arranged for President Trump.

Daesh struck at the beginning of the fasting month of Ramadan, a time when families get together. If any more evidence were needed that Daesh is anti-Islamic, that should be enough.

The deadly terrorist organization took over 40 percent of Iraqi territory in 2014, but it has gradually been expelled from almost all of the territory it grabbed. It is now facing an Armageddon in a West Mosul pocket as the Iraqi military closes in on it. Unlike in past such campaigns, the Iraqi military and its allies, including the US, did not begin by calling on the civilian population to exit Mosul, presumably in part to cut down on the number of fighters who could escape under cover of an evacuation of noncombatants.

As they face certain defeat in the last major urban areas they hold (Mosul, Telafar, Hawija), they have fought back with the ferocity of cornered rats. The terrorism aimed at soft targets like children is in part their revenge on Iraqis for rejecting their cruel and brutal rule, which involved a resurrection of slavery.

Targeting Karrada in particular, however, is also part of their longstanding strategy of creating alienation between Sunnis and Shiites, hoping that Shiites will so mistreat Sunnis in retaliation that the latter will be driven politically into the arms of Daesh.

This strategy of civilizational polarization and mobilization through hate was the same one their Libyan cell deployed at the Ariana Grande concert in Manchester. In order to combat Daesh, we have to see what it is doing not just in Europe but in the Middle East. We are all in it together.