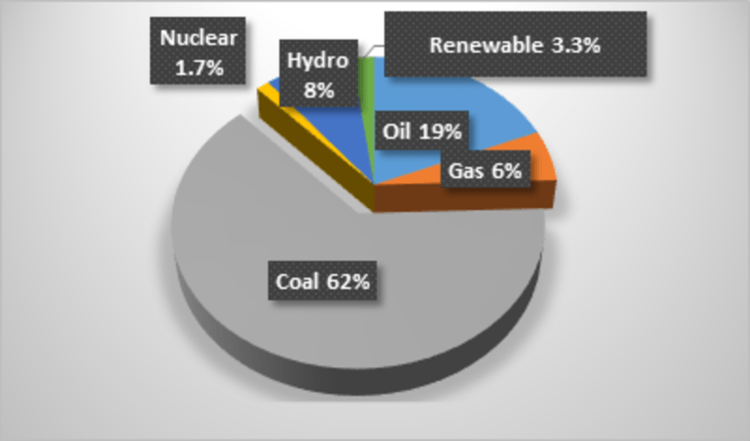 China’s remarkable growth over the past three decades has elevated it to global superpower status. But its economic miracle has also attracted attention for the wrong reasons: the country is now the world’s largest energy consumer, oil importer, and CO₂ emitter. It led to the line that China builds a new coal-fired power station each week being faithfully and unquestioningly repeated. However, this is no longer a fair reflection of the country’s energy situation.

It’s true that China consumes around a quarter of the world’s total primary energy and more than half its coal. This was once a necessity. The “open door” policy to foreign investment that began in the late 1970s led to rapid economic growth and, in turn, a spectacular rise in energy demand. Electricity consumption in China rose from just 232 kilowatt hours (KWh) in 1978 to nearly 6,000 terawatt hours (TWh) today – that is, six thousand billion kilowatt hours – and to keep up with demand, China needed coal.

However, coal as a proportion of China’s energy mix peaked at 75% in the late 1980s and by 2016 it had fallen to 62%, the lowest since the establishment of the People’s Republic in 1949. This was a result of Beijing taking serious measures in recent years to cut coal, in order to reduce domestic pollution and to tackle climate change.

One of these measures was the Top-1,000 Enterprises Energy-Saving Programme. Launched in 2006, the programme targeted the country’s largest energy-consuming firms in sectors like steel, petrochemicals, cement, and textiles. Together, these 1,000 enterprises accounted for a third of the nation’s energy consumption. The programme was quite effective and contributed towards China’s efforts to reduce its energy consumption per unit of GDP.

The government has also taken action to slow the country’s economic growth and set lower annual rate of GDP growth at 6.5% in the 13th Five-Year Plan (2016-2020), against 9-10% in the previous three decades.

With economic growth slowing and the heaviest polluters being forced to use less energy, coal generation was a natural choice to cut back. By this point, people in China were well aware of the problem with coal. And from the mid-2000s the pollution problem was becoming too serious to ignore, and civil society groups began to protest. Local authorities initially resisted the government’s “war on pollution” but last year brought about some of the worst smog ever recorded in China and the strongest response yet from the central authorities.

In September 2016, China’s cancelled more than 103 under-construction and planned coal-fired power plants, a total of 120 gigawatt hours (GWh) of capacity. In March this year, premier Li Keqiang announced that an additional 50GWh would be shut down or postponed. The coal power stopped in China so far is equivalent to the combined coal power capacity of the UK and Spain. China’s era of one coal-fired station a week is over.

A commitment to cutting emissions

Beijing’s long-standing opposition to international climate change obligations is well-known, at least prior to the 2015 UN conference in Paris. But things are changing. Though China’s coal capacity may yet increase slightly over the next few years, any growth will be dwarfed by planned investment in solar, wind and nuclear.

China is now the world’s largest backer of green energy, accounting for 17% of global investment in the sector. According to Greenpeace, it installed an average of more than one wind turbine every hour of every day in 2015. It also covered the equivalent of one soccer field with solar panels every hour, action that may allow China to meet its 2020 goals for solar installation two years ahead of schedule. By 2030 it is hoped that cleaner energy will help reduce China’s CO₂ emissions by 54% from 2010 levels.

This is good news because the inescapable fact is that efforts to mitigate climate change are doomed to fail if the Chinese do not get on board. Compared with other countries, China still has a long way to go. Britain, for instance, recently managed a day without coal for the first time in more than 130 years, while other countries have drastically cut their carbon footprint.

However, energy policy is, as with most aspects of Chinese life, more complicated and more susceptible to internal and external pressures than many observers believe. The reaction of the Chinese leadership to these pressures gives us hope that the country can free itself of dirty coal, and that this day may come sooner rather than later.

National Geographic: “Leonardo DiCaprio visits China to learn about the country’s shift from a reliance on fossil fuels to renewable energy”