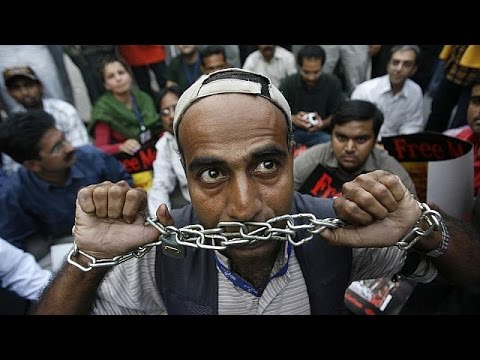 Among the 22 countries belonging to the Arab League, 17 are ranked as “bad” or “very bad” in the annual World Press Freedom Index published today by Reporters Without Borders.

The nine classified as “very bad” are Bahrain, Djibouti, Egypt, Libya, Saudi Arabia, Somalia, Sudan, Syria and Yemen. Worldwide, these account for almost half the countries in the lowest category.

An even more alarming feature of the index, though, is that it shows press freedom in the Arab countries on a broadly downward trend. The table below compares this year’s rankings with those in 2010 – just before the start of the “Arab spring” protests. Since then, only six Arab countries have improved their global position and twelve of them have gone down.

The most notable improver is Tunisia – widely regarded as the only success story in the Arab Spring – which has moved up 62 places.

Meanwhile, Egypt has dropped 34 places since the overthrow of the Mubarak regime. Others showing a substantial drop (in double figures) are the UAE, Iraq, Lebanon, Bahrain, Jordan, Kuwait, Saudi Arabia and the tiny state of Djibouti.

In a commentary on this year’s index, Reporters Without Borders highlights Egypt and Bahrain. It says many journalists have been imprisoned in both countries– 24 in Egypt and 14 in Bahrain – and they both detain their journalists for very long periods of time:

In Egypt, Mahmoud Abou Zeid, a photojournalist also known as Shawkan, has been held arbitrarily for more than three years without being tried. His crime was to have covered the violent dispersal of a demonstration organized by the Muslim Brotherhood, which is now branded as a terrorist organisation. Freelancer Ismail Alexandrani has been in pre-trial detention since November 2015 although a judge ordered his release in November 2016. Regardless of the law, the regime led with an iron fist by General Al-Sisi tolerates no criticism, suppresses protests, shamelessly erodes media pluralism, attacks the journalists’ union, and encourages self-censorship amongst reporters on a daily basis.

The situation is no better in the kingdom of Bahrain, which is back in the black [“very bad”] zone where it always was, except for a brief respite in 2016. Dissidents or independent commentators such as Nabeel Rajab, the head of the Bahrain Centre for Human Rights, pay a high price for daring to criticise the authorities in tweets or interviews. The regime intensified its repressive methods in 2011, when it feared it might be overthrown. Any content or media suspected of posing a threat to the country’s unity is simply suppressed, and detained journalists face the possibility of long jail terms or even life imprisonment.

The survey’s methodology is explained here.

Brian Whitaker is a former Middle East editor of the Guardian. He is the author of several books about the region, most recently Arabs Without God: Atheism and Freedom of Belief in the Middle East.